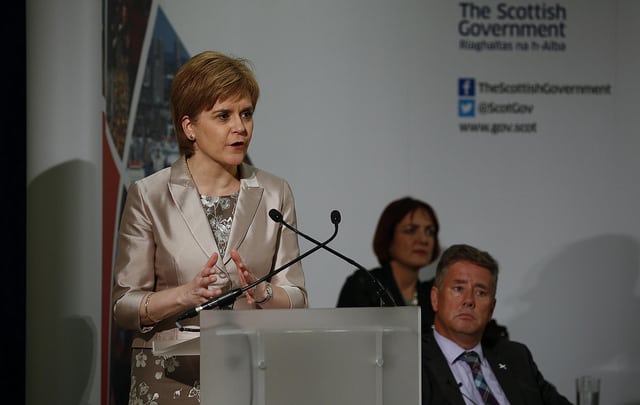 Sturgeon has created a “debt mountain” for Scottish students

Kezia Dugdale, the Scottish Labour leader, speaking about the SNP pledge made in 2007 that stated that they would eradicate student debt in Scotland before the impending election, asked: “Did the First Minister ever have any intention of keeping that promise?”

The accusations come after a report, published by the Student Awards Agency for Scotland, showed that under the current SNP government the average bursary or grant had been cut by almost 30 per cent. Figures also show that borrowing had rocketed to £467 million, nearly doubling in the two years after state grants were cut back in 2012.

Nicola Sturgeon argued back, highlighting to her opposition that, “when you look at average student loan debt, what you find is the figure for Scotland is significantly lower than any other part of the United Kingdom.”

She said that current figures tell us that the average debt for England stands at £21,180, with Wales and Northern Ireland at £19,010 and £18,160 respectively. Student debt in Scotland is significantly below these at £9,440.

The First Minister continued, saying: “We live in tough financial times, everyone knows that, and tough choices always have to be made, but we will continue to make sure we are providing good support for our students, so that more of our students from the most deprived parts of our country can take the opportunity to go to university.”

She also noted that at a time when the UK is taking steps to cut bursaries all together, the Scottish government are acting to increase the bursary element of the support package.

NUS Scotland president Vonnie Sandlan also hit out against the Scottish government’s decision to increase student borrowing, whilst all the while keeping to its free university tuition policy.

“Without access to the necessary financial support, students are forced to turn to commercial debt, take on unreasonable amounts of part-time work, or even drop out of education all together.”

Poorer undergraduate students are said to borrow 30 per cent more a year on average, around £5,900, than their more well-off counterparts.

She advised that other parties look to tackle these issues before the upcoming Holyrood elections next May. She added: “We need to look at the wider cost of studying, and how students are supported in education.”

Speaking further on the matter, Ms Sandlan said that it is “simply a huge waste of some of our brightest potential, and a huge waste for our country.”