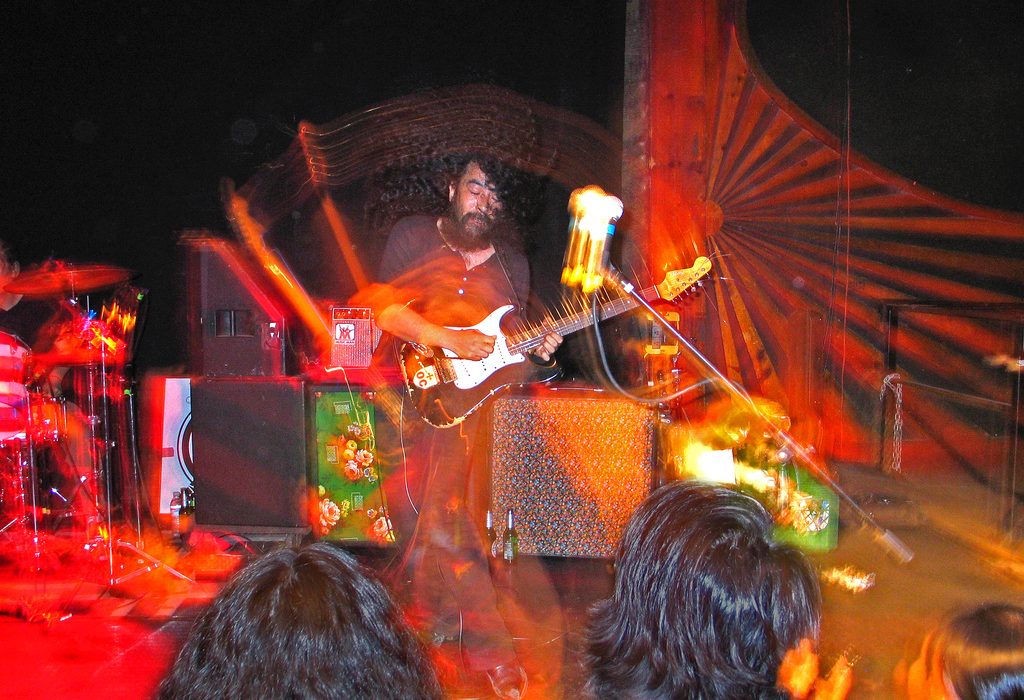 Band on the Wall

Kawabata Makoto’s experimental collective Acid Mothers Temple came to Band on the Wall on Tuesday night to perform a mesmerising set. The Nihonjin commune sorcerers released their 73rd studio album in May—a reworking of Osamu Kitajima’s Benzaiten. In reality it’s less of a reworking, and more of a platform for the Temple’s usual droning, post-pyschedelic exploration.

‘Benzaiten (God of Music and Water)’, the opening track of the album and set, had a bluesy funk-like structure with a lot more groove than expected. Along with elements of free jazz and Japanoise, the central riff was complemented by improvised electronic sprinkles generated by Higashi Hiroshi.

Stood at the centre of the stage behind a sonic control panel, Hiroshi embraced his wizardly appearance by swinging his long white beard around as if possessed by the God of Music and Water himself. After about an hour, mood-inducing drones were interrupted by Hiroshi’s looped electro melody that heightened the tempo and increased the urgency of the three guitarists’ experimentation.

In terms of their style, there’s definitely continuity with ‘70s space rock bands such as Hawkwind and Gong, but Acid Mothers Temple’s swooshing, unanchored soundscapes certainly represent something unique. As everyone became more assimilated to the band’s sound, Makoto’s enchanting drones became more and more captivating. One song even broke the half hour barrier few have ever dared break (or so it seemed). The ‘Benzaiten’ reprise worked perfectly as Makoto, with a feather woven into his guitar, returned to his favourite riff.

Tsuyama Atsushi brought the cosmic voyage to an end with some recorder improvisation punctuated by jazz drum fills, and then attempted to play his guitar and recorder at the same time. Although, while selling their own merchandise, they wouldn’t let an angry Southerner barter down the price of a t-shirt from £15 to £10, Acid Mothers Temple produced a hugely enjoyable and authentic performance that even trumped Hawkwind’s spectacular display at Academy 1 earlier in the month.