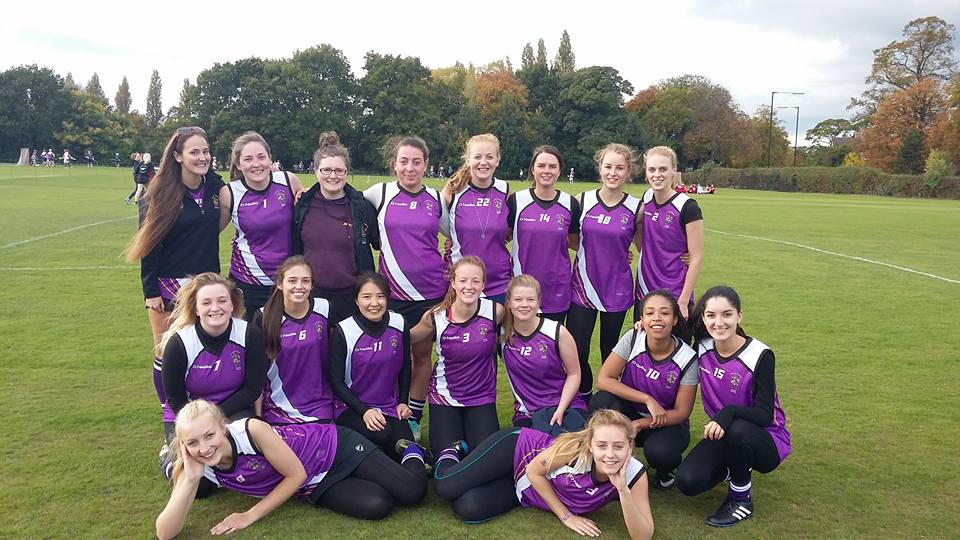 SPORTLIGHT: The University of Manchester’s Lacrosse

Lacrosse is a game for those who want to play in a team. There is no time for hogging the ball, and there must always be a line of communication open throughout the game. Flo Elliott, the women’s first team captain, simplifies the rules of the game to describe it as “hockey in the air”.

Lacrosse is quite different to other sports; the men’s and women’s games are very different. The men wear helmets, shoulder pads and arm pads due to their game being more contact-based, whereas the women’s game does not have any major contact, and so they wear no extra equipment. Furthermore, the men’s sticks have deeper pockets for tricks, and the women’s sticks are shallower for control. Even the pitch lines are very different.

Lacrosse is offered at a variety of different levels across the university, and a campus league is set to begin in semester two for the first time ever, in order to add yet another way in which you can get involved in lacrosse. It will be a mixed league, which highlights just how open these leagues are to including a variety of people, and how it can also be a great way to make new friends and have fun. If you think you may be interested in joining the lacrosse campus league, then go onto the Mancunion Sport facebook page for the sign-up link.

If you are interested in getting some practice before your campus league season begins, or if you simply want to learn lacrosse at a relaxed, friendly level, then Sporticipate is for you! Here at The Mancunion, we are big champions of Sporticipate, because we understand some people just want to play sport very casually, to meet new people, and to do both cheaply (free, in fact!). Sporticipate’s lacrosse sessions take place every Sunday 1-2PM on the outdoor pitch at the Armitage Centre, which means that you have no excuses of a timetable clash, or a hangover, since nobody can afford club prices on a Saturday night! Also, don’t worry either if you had no idea what lacrosse was until a minute ago! Despite the fact that lots of people have registered interest in coming to the lessons—most of them are beginners.

Lauren Magee, a second year Adult Nursing student, has been going to the lacrosse sessions this year and has had this to say: “I have found it really fun and easy to pick up. Each session is led really well, which makes things a whole lot easier. It’s okay to make a mistake, because everyone’s a beginner. I wouldn’t say anything has been particularly difficult, but like all sports, things take time and practice.” Lauren obviously has taken to the sport of lacrosse, so it may seem hard to believe that prior to playing with Sporticipate, she had never played lacrosse before, and she admits this did put her off to begin with, but has since really enjoyed the sessions. She goes on to add that she “found it way more relaxed and open to beginners than other sports, so wasn’t too worried about it being competitive or difficult.”

The sessions themselves begin with a warm up, then a separation into two groups due to the large turnout. Then there will be a focus on a skill each week, as the weeks progress, with time to focus on the previous week’s skill also.

To take that next step up the ladder, and further your skill with a more competitive edge, then the university clubs may be for you!

First team captain Flo Elliott is full of praise for the influx of first years that have embraced the sport this year. This season has been going really well for the women’s first team. They drew with Loughborough, a team against whom they usually struggle, and thrashed old rivals Nottingham 20-4! Flo gives some credit to two of the players, who have been helping them improve in training. “We currently have the England and Wales U19 captains, who has been brilliant for improving our game, because we’ve managed to harness their plays and techniques to add a new, more professional dynamic to our game.” The belief is definitely there that the team can finish higher than they did last year, despite some rocky away form this year. Flo believes the team has a chance at finishing third in the tough Premier North League.

The women’s second team are doing well, too! Second team captain Georgia Aynsley expresses her pride in the season so far, with the team having won three of their opening four games, including a win over Manchester Metropolitan University two weeks ago (which everyone loves to hear)! The girls really showed their determination in this game, and they defeated the local rivals despite having no substitutes, after working hard in recent weeks with extra intense fitness sessions. Second team coach (and one-time first team player), Fabienne Johnson, described the performance of the girls late in the second half as displaying “some of the most controlled play I’ve ever seen to secure a well-deserved victory 11-9.” With strong performances so far this season from Sally Boultbee, Yui Watanabe, Harriet Price and Charli Musgrove, the team are excelling this season. Georgia highlights these players, but also states that the team have clicked since the very beginning of the season.

On paper, the men’s teams have not had as successful a season as the women’s teams; however, they are showing signs of improvement, with such a tight-knit group of players demonstrating that they are beginning to click. Still without a win, the first team highlighted marked signs of promise in the latest defeat—to Leeds Met. Despite being 5-0 down in the first quarter of their game, the team showed great strength to get back to 12-10 at the final whistle; a significant improvement on the 24-4 loss to Durham on the opening day.

The second team are also stranded at the bottom of the BUCS table at the moment. However, when you look at whom the team are playing in their league, credit must be given to the lacrosse second team. Out of the six teams in the 2A league, they are the only second team there, since Bangor, Chester, Liverpool, Keele and Lancaster all have their first teams in this league. Last season the team saw themselves finish fifth, escaping relegation, so there is hope that they can do the same again this year!

The university’s partnership with local club Timperley Lacrosse gives the club that unique cutting edge over others. The partnership has been ongoing for seven years, and aims to recruit new talent and to improve our university clubs. Timperley offer the club’s players extra training and matches with the Timperley squads, which may be why the teams are so successful. Fabienne Johnson now plays for Timperley, and states that “it was great to know I had a club I could join once I finished university.”

Fabienne describes the importance of playing sport at university. “My involvement in university sport taught me as many useful and employable skills as my degree, and I would encourage everyone to get involved with some sport at university no matter what, it doesn’t have to be a club!” And, with so many levels of lacrosse available for any player at the University of Manchester, maybe this is the sport for you to gain those skills and have a good time!