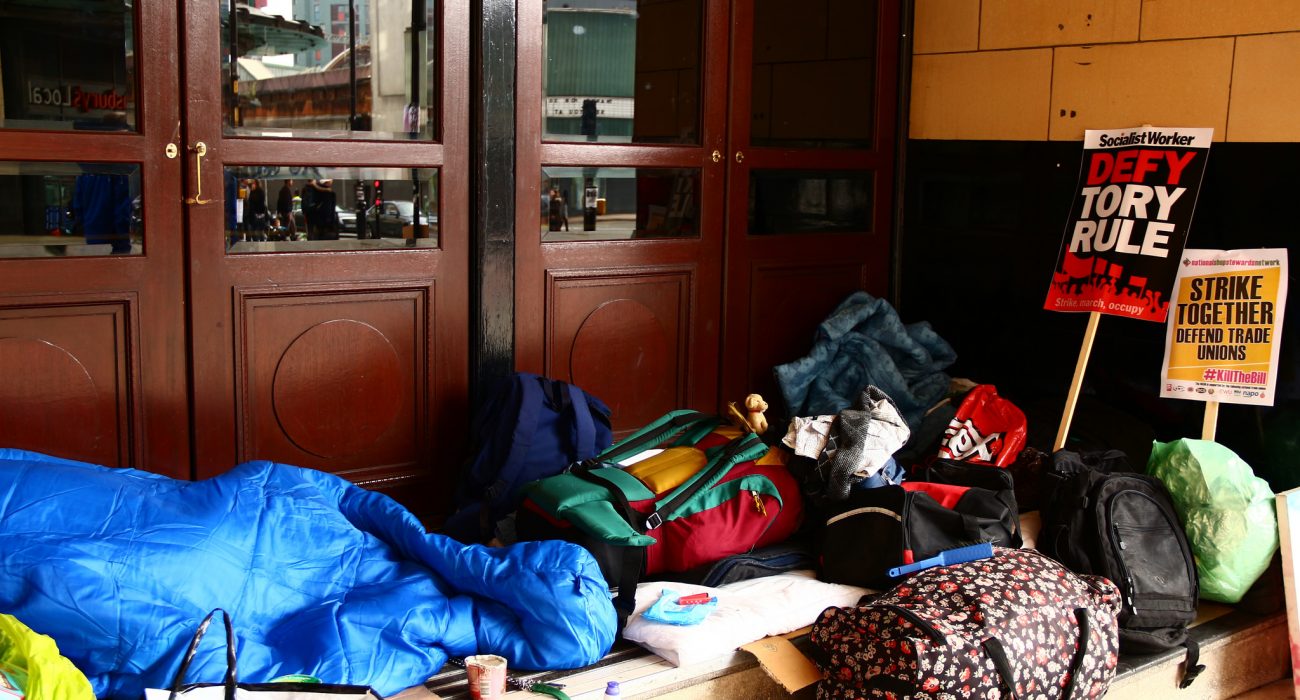 It’s 2015, and Britain has just been announced as the fifth richest country in the world. Our economy is growing at a faster rate than any other G7 member, and in May we saw Surrey, where the average house price sits comfortably in six figures, receive a £27 million boost from the government.

It’s 2015, and in the fifth richest country in the world, over 1.1 million people rely on food banks. Child poverty is becoming ever more prevalent, and Manchester has suffered a funding cut of £28 million.
It’s 2015 and we live in one of the richest countries in the world. Yet Britain swung to the right, and inequality has taken off.

Little over six months have passed since the Conservatives won a majority in May. Funding cuts to Manchester, a Labour stronghold, have resulted in the closure of over 600 independent charities and agencies; mental health services, drug and alcohol support groups, and children’s programmes are just a handful of the resources lost in recent months. The North—home to some of the country’s most vulnerable—has been hit hard by austerity. The Tories, who claim to be ‘a party of working people’, have introduced policies that disproportionally hit those on low and modest incomes. For many of Manchester’s women and children, life under a Conservative government has become almost gruesome.
Concealed by the shiny skyscrapers and designer shops of Cathedral Street lies a struggling city, where one in five children live in extreme poverty. A proportion higher than in any other area in the country—and at a shocking 120 year high—some of the worst affected live little more than a stone’s throw from our own University. Poor childcare provision in Hulme and Moss Side has resulted in over 50% of children living in poverty and ‘wishing for cleaner, safer, housing’.

A recent visit to the impoverished area of Little Hulton—where 46 per cent of children live in poverty, putting it in the worst 2 per cent of wards in the country—demonstrated the scale of the problem first hand. Boarded up windows and littered streets characterise a deprived area that sits in the shadows of the city centre’s bright, sparkling skyline. A weekly youth club, run entirely by volunteers, is the extent of activities available to children, who spend the rest of their time on an estate they describe as ‘scaffy and full of shootings’.

Loneliness, anger, sadness: all words that those as young as 12 are using to describe a life blighted by poverty. Cuts to social services provide them with little opportunity to escape; knowledge of higher education is scarce and job opportunities are few and far between. It then comes as no surprise to hear that a staggering 4,500 Manchester children run away from home every year. For the cold, dangerous, unforgiving streets of Manchester to seem like their only option is heart-breaking. We’re leaving our children at a serious risk of being harmed, of ending up homeless. In Manchester, in 2015, it’s almost an epidemic.

It’s hard not to notice the city’s homeless crisis. There was the Ark shelter near to the University, another that sits adjacent to Piccadilly Station, and many more dotted across the city. Cuts to frontline services including housing, citizens advice, and mental health and drug support are responsible for the sharp rise in the number of rough sleepers in Manchester. According to council statistics, last November there were 47 people who spent their nights sleeping outside. It has recently been revealed, however, that the number is now nearer to 100, with the potential of being much higher; the government does not count rough sleepers if they lie on a bench or against a tree. Even more shockingly, the homeless are not counted as rough sleepers if they are awake when the authorities do their count.

As child poverty levels rise, as more and more become homeless, and as austerity measures continue to hit Manchester, it is also women who are at risk of being left behind. The imminent threat of tax credit cuts is only going to make life harder for females in the Manchester area; with public sector jobs (an industry in which women make up 77 per cent of workers) due to be axed and cuts to legal aid and social security looming, we’re going to see women having to bear the brunt of measures to pay off Britain’s deficit. The UK recently slipped down to a disappointing 26th on the World Economic Forum’s Gender Gap Index, sitting below most other European Countries. Without swift and effective action to address gender inequality, we will see the UK falling even lower. Perhaps it is due to low representation that we as women have become the bearers of austerity; despite record numbers of us recently coming into office in Parliament, they still remain under-represented in the top levels of British society, with only 29 per cent of all MPs being female.

The Students’ Union’s Access All Areas programme offers looked-after children an insight into University life through a day of workshops and activities in order to encourage further education. “Girls like me don’t want to study”, 11 year-old Destiny announced at the end of the most recent session: “Because we don’t know any girl scientists or professors.”

It’s sad to see a city so prosperous being broken by austerity. ‘The child poverty capital of the UK’, a recent headline reads, as Manchester City Council’s grant for school uniforms becomes the victim of even more budget cuts. Thankfully, in these times of difficulty, the North demonstrates it’s resilience in a truly ‘Mancunian Way’.

Children’s charity Wood Street Mission, determined to make living in Manchester about more than survival, has stepped in to launch ‘SmartStart Manchester and Salford’, aiming to distribute £1 million worth of uniforms to children—enough to provide for every child living in poverty. A scheme funded entirely by local residents and businesses, SmartStart hopes to eliminate the negative impact that having incorrect uniform and PE kit has on a child’s school performance. It may seem small, but is crucial if the young are to grow up and break the vicious cycle of poverty.

And while a handful of locals work with Wood Street Mission to help children out of poverty, a small army of volunteers feed the homeless—overlooked for sleeping on benches—as part of the newly founded ’Breakfast in Bed’ street life project. Each morning they cross the city, handing out tea, coffee, homemade bacon butties, fruit, and cereal bars to rough sleepers. A little gesture, but one that goes a long way: “We do want to make life easier for the homeless—that’s what we set up for,” reflects Jamie Whittaker, who launched the project in January. “It was freezing cold and we thought, they deserve a bit of food, they deserve a bit of dignity. So we had a meeting in the town hall, we told [the council] what we do, which is that we go around feeding people.”

As female unemployment rises, wages fall, the pay gap widens, and benefit, household, and living cuts rise, women face a daily struggle to keep themselves and their families from slipping deeper into poverty. 45 years after the Dagenham women workers fought for equal pay, we see increasing parts of our economy fuelled by cheap labour, with more than one in five earning less than a living wage, and two-thirds of these being women.

However, in Manchester, in the day-to-day battles against poverty and underrepresentation, we are fighting back. Women are playing a leading role in the movement against austerity, evidenced by the huge number of us in the 100,000-strong anti-austerity demonstration outside the Tory party conference at Manchester Central in October. Although it seems that political leaders are not using the nation’s resources in the interests of the majority, it is clear that the people of Manchester are not waiting for authorities to act, but are prioritising the abolition of poverty in their own way.

Two years ago, three things drew me to Manchester: the music scene, the media scene, and the city itself. A creative hub where cheap theatre is made and enjoyed, where you’ll find bands playing at midnight in the gallery, and yoga classes on Sunday mornings in the museum. Cheerful and lively; it’s a student haven where all night libraries gaze across the street at all night parties. The city is home to what DJMag describes as ‘the best club in the world’ and regularly has internationally renowned musicians playing alongside newcomers in a perfect example of Manchester’s accepting, engaging culture. A culture that, following the results of May’s general election, is sadly being threatened.

The most deprived areas of Manchester remain unchanged, proving that poverty and homelessness are at their most dangerous when they become almost normal. It is these same neighbourhoods that have borne the brunt of government cuts since May, and, as the council tries to deal with this entrenched deprivation, they are confronted by an onslaught of hurdles thrown up by the cuts that austerity entails—of which there are many more to come. For children, women, and the homeless, many basic services are a lifeline, and the demise of these services will serve only to entrench deprivation further.

Despite all the challenges, the people who rely on local services, and the authorities who deliver them, understand their value and appreciate the role they play for the deprived and affluent alike. With vital services under threat, the council is going to have to innovate and stretch its budget to aid those most in need. Yet due to constant cuts, the resilience of local services cannot be stretched much further. If we want Manchester to remain as sparkly as its skyline, it’s up to us, as students, to campaign to keep the city’s lights from going out. In the words of Benjamin Disraeli:

“What Manchester does today, the world does tomorrow.”