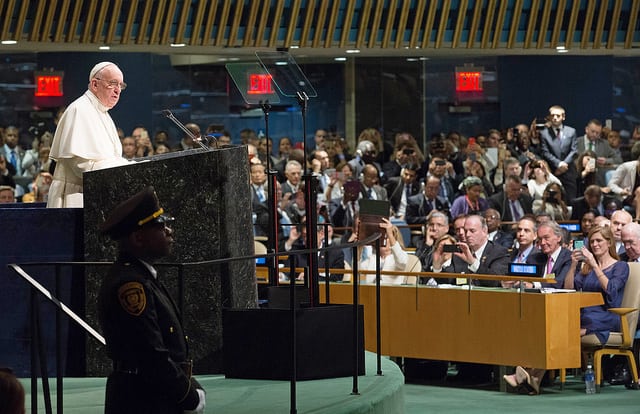 A presidential Pope is unhelpful

A rock album, grand speeches on climate change, a favourite subject of memes, and various criticisms of capitalism and inequality. Particularly for those on the left, what is there to not love about the Pope? I agree with much of his politics, and in particular I admire the role he has played in the climate movement. However, it is easy to forget that the man heads up the Catholic Church: perhaps the epitome of certainly European, if not global, organised religion. Therefore, his role in international politics needs some examining.

Most recently, his African tour has stirred up some controversy. In the sectarian war-torn Central African Republic, he claimed to be the “apostle of hope”. Yet, the contradictions are awkward to say the least. The district of PK5, Bangui—known as the most dangerous in the capital—he visited whilst Christian militias prevented Muslims from leaving the area during his visit. Then, after he removed his shoes and faced Mecca in a local Mosque, he preached, “Christians and Muslims are brothers and sisters”. These are kind words, but to Muslims who all likely know relatives or friends murdered by Christian militias, this message is perhaps edging on being naïve.

The trip included Uganda, a country renowned for its persecution of LGBT* communities. Here, he utilised a mass to again preach the word of peace. But then, amidst the loving and caring, he became unstuck, refusing the opportunity to condemn the aforementioned persecution, much to the disappointment of the LGBT* protesters. At least the bulletproof glass-covered Popemobile was ditched for this trip, although it was replaced by a fleet of UN Kevlar-coated troops. But the sense is still that he is somewhat removed from the people to whom he is preaching, and the realities of their lives. Of course, this isn’t profound; how could a non-democratic representative of God be truly in touch with the people?

The tradition of the separation of religion and state is a founding principle of western democracies. When the Archbishop of Canterbury, for example, made a comment about the immorality of austerity, he was largely criticised (although praised by some on the left). If we are attempting to build a democratic world through institutions such as the UN, should this rule not apply at an international level? Therefore, the Pope’s comments on international politics should be brought into question. His approach to the African tour, whilst having good intentions and perhaps positive outcomes, has a whiff of ignorance

His actions might seem good and proper from our western and ‘Christian’ nations, but perhaps many Muslims don’t see it that way. Although the Pope has been on a mission of drawing peace between his church and Islam—he kissed a Quran in the US, and paid sympathies to the Hajj victims—I am not so sure that these efforts will chime so well with the Fundamentalist, conservative sections of the faith. In times of such religious divide, it is hopeful that the Pope is seeking to bring peace. But I question whether he can be one of the figureheads for the peace movement.

When it came to the topic of the upcoming festive period, the Pontiff urgently pointed out that this year’s Christmas would be ‘a charade’. While the ‘whole world’ is at war, he claimed, the celebrations of Christmas will be a veil to the current conflicts in the world. Here again, the weakness in the international prominence of a religious leader is shown. He mentioned no other celebrations of the world—the recently-passed Diwali, for example. The Pope spoke about international affairs with a veil, not dissimilar to the one he was criticising, cast over his eyes.

Amongst all of this, it must be remembered that the Pope’s well-meaning does not entirely represent the Roman Catholic Church entirely. Since his appointment in 2013, much uncovered information about sex abuse has come to light. The Church has gone about trying to change this. Increasing transparency and reform of the Vatican Bank, after an alleged widespread money laundering history, are amongst the changes being made. A new face in the selection of Pope (an Argentinian one) has been important too, as the Church looks to the population of Latin America as a strengthening and youthful base for global Catholicism. But the image of the Church remains tarred. As long as cases of historical or current scandal keep surfacing, Pope Francis will find it very hard to move on from the popular image that many outside the faith hold.

In these times where religion is such a dividing line, the Pope should not take such a forward role in international politics. At the international level, religious leaders should not campaign for these issues to such a grand extent, that role lies with national democratic representatives and field experts. Furthermore, the Church and the Vatican should look to reform itself fully before it goes out into the world claiming to be an ‘apostle of hope’. But this might just be an atheistic bias: Others might say that in such times, it is important to stand strong with faith and to show pride and unity to build peace, particularly if the leader of that faith is advocating such good causes. However, in times of division and adversity, it is wise for religion to be kept as private as possible. 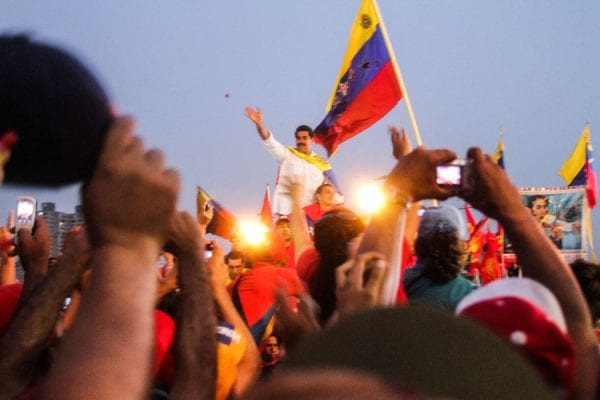