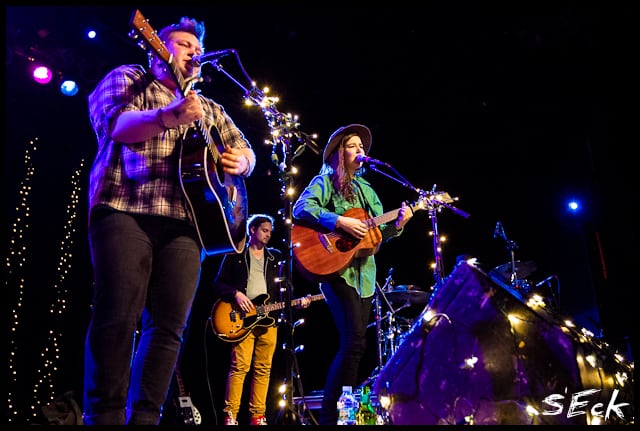 Live: Of Monsters and Men with Highasakite

Norwegian band Highasakite opened the night, and proved to be a strong support. ‘Since Last Wednesday’ and ‘Leaving No Traces’ from their 2014 album Silent Treatment went down especially well, starting as minimal compositions before building up to epic horn-fuelled sounds. Despite having a small UK presence, they were well received by the crowd, and in many ways their support slot overshadowed the disappointing main act, Of Monsters and Men.

New material was the cause of OMAM’s downfall; dark, electric and uninteresting, it simply alienated much of the crowd. The combination of big choruses and simplistic chord structures on tracks like ‘Wolves’ (that unfortunately was characteristic of the direction that the band took on recent album Beneath the Skin) is utterly middle of the road. I would be over exaggerating if I said that all of their new material was weak. The piano-driven ‘Organs’ was heartfelt and intimate, and was a reminder of why the band achieved such a global fandom. It’s just a shame that the rest of Beneath the Skin couldn’t have been as imaginative as this. ‘Black Water’ sounded fantastic, probably because it tried to avoid the bigger chorus route taken by most of the other tracks, and ‘I of the Storm’ was also enhanced by the live setting.

However, it’s the older material where Of Monsters and Men really excelled. While the heavy infusion of natural imagery in much of their lyrics is frustrating for some, for me it is a reminder of the breath-taking landscapes of the band’s native Iceland, and the folklore so present in the culture. Early singles ‘Little Talks’ and ‘Lionheart’ unsurprisingly received the biggest response from the crowd.

It feels like OMAM are going through a difficult transition period. They are rightly trying to move on from their hugely successful first album, but the new material simply isn’t strong enough. In addition, the whole gig just felt a bit safe; as testament to their entry into the mainstream, the whole audience seemed full of mums and dads, and stank of a Mumford and Sons gig. Maybe this is just a blip before a third album, but I hope that the next time I see Of Monsters And Men, they have returned to their previous form.