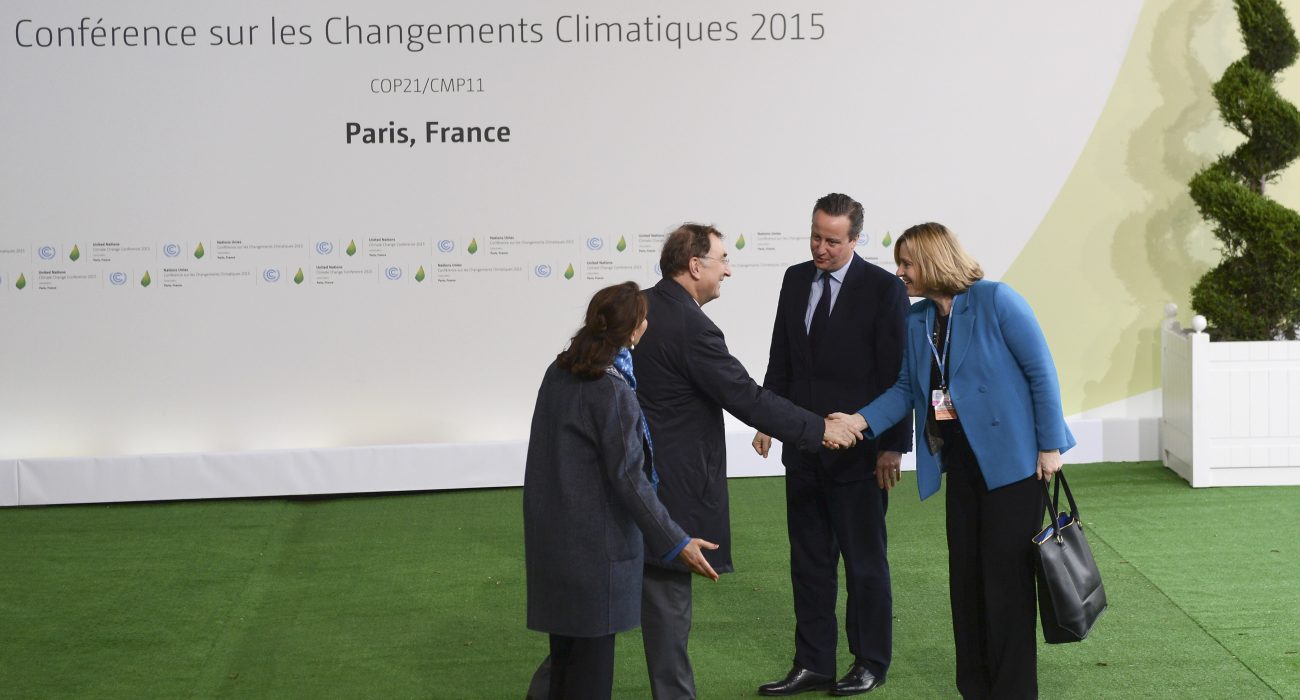 David Cameron arriving at the Paris Climate change conference, but will the conferences pledges be fulfilled? Photo: Number 10 @Flickr

The past few weeks have seen Paris at the centre of attention once again, but this time for more amicable reasons. The city has been host to the 21st Conference for the Parties to the United Nations Framework Convention on Climate Change, or COP21 for short.

The meeting extended from the 30th November to the 11th of December 2015, and saw 196 countries convene to consider a potential new agreement on climate change, with a focus on reducing emissions of greenhouse gases. There was also the ambitious objective of allowing countries to continue financial growth, to make sure countries that are less developed are supported through the process, and to cooperate with those who are at greatest risk of the impacts of climate change.

The meeting has been cited as the best opportunity in six years for a new climate treaty to be agreed. Some 40,000 people shared attendance including more than 100 heads of state and the summit finally involved the USA and China. A sense of a ubiquitous desire to reach a meaningful agreement has been felt.

Governments have been meeting for years, with Rio in 1992, Kyoto in 1997 and Copenhagen in 2009 perhaps the most familiar. However, sense of failure has been detectable at many of these previous events. This conference hopes to have greater impact by shifting from an all-encompassing settlement towards a resolution from each nation.

It has taken an exceptional parade of sovereignty to reach any sort of progress towards a compromise. Individual governments could and should have developed greener initiatives before this conference—why does it take a 40,000-strong global summit for significant progress to be made? Leaders should take the initiative for their own country before worrying about other nations.

Of course nations need to cooperate and form a binding agreement, but that should not stop action prior to this. Nations reach diplomatic agreements on other issues, so they should too with energy transition. Credit is due to those nations who have already embraced the need for a shift towards cleaner societies and begun to implement appropriate changes, not to mention the grassroots projects in many nations worldwide. Many, however, still feel that not enough has been done to move away from fossil fuels.

Nations were asked to make their own pledge and commit to what they felt was necessary—pledges are not legally binding. Countries are also permitted to choose their own baseline for which emissions should be compared. The only sanctions that nations will face is public shame. This means countries can continue to scoff at emissions targets and be met with nothing but a crude column in National Geographic.

Heads of State are interested in the short term and intermediate goals. They are currently unwilling to let the climate get in the way of their attitudes and their friends’ profits. By the time the effects of environmental damage have become more striking these Presidents and Prime Ministers will be out of office.

David Cameron, Barack Obama, and other world leaders gave speeches on the importance of a meaningful deal, coming out with climate change jargon that made them seem like Greenpeace activists. The environmental record of the current UK government tells another story, with 2020 targets for renewable energy unlikely to be fulfilled, not to mention scrapping a green deal, providing more subsidies to fossil fuel companies, and abandoning subsidies for solar and wind energy.

One speech at a climate conference does not hide this. Cameron has no hesitation in advocating airstrikes on Syria but is still hesitant on investing in an energy transition after 10 years in office. The government of a nation as developed as Britain has a responsibility to do more to implement notable changes.

Up until now, the global attitude in relation to a transition towards a greener future has been met with trepidation. Many nations discuss the risks of a transition away from fossil fuels—someone needs to take a lead.

The move to a cleaner future may provide financial benefit for the nations that commit. Fossil fuels are likely to become more expensive, while wind and solar power in some areas is nearly equally expensive as coal and gas. If governments make serious pledges then investment and innovation can be directed at greener initiatives and momentum will build. Moves by the government in the opposite direction, such as scrapping support for solar and wind energy, do not make future investments any more likely.

We need to reduce the influence that fossil fuel companies and large corporations can have in industrialised countries and begin to provide more incentives for businesses, both large and small, to cut carbon emissions. Germany look to continue their green transition with Angela Merkel suggesting governments pledge to rely solely on renewables by 2050. France have taken a similar position, with François Hollande doubling investment in renewable power to €2 billion.

9 out of the hottest years on record have occurred since 2000. 2C of warming is often cited as the tipping point; 1C of warming has already occurred. The actions of three particular nations matter most: China, India and the US.

These countries will be a cornerstone in determining how successful the summit is. The Prime Minister of India showed a promising commitment towards cutting their emissions by admitting the dangers of continuing with fossil fuels and introducing a solar alliance. This included more than 120 other countries, most from the Pacific region, agreeing to share financial and technological resources across the alliance. This is the sort of progress that the other big emitters need to commit to.

Action has been seen on both the global and local scale—Manchester’s mayor has pledged to make the city 100% reliant on green energy by 2050. This is also the case for more than 50 other Labour councils across the UK. Communities need to recognise the collective impact they can have on our global future.

Despite all this progress, 2015 looks to be the warmest year since records began, and the effects of climate change are already very discernible. Many areas of the Pacific are at risk of inundation, whether by rising sea levels or climate refugees. Climate refugees are already being seen in areas of Bangledesh, though migration as a result of climate issues was removed from the agenda of the Paris talks.

Western nations should shoulder the responsibility for much of the problem. Developing countries feel like they have the right to fossil fuels to help them develop and reduce poverty. It is true that developed nations have already had their chance to abuse sources of fossil fuels. Future development does not need fossil fuels. Developing nations could use the arrival of affordable clean technology to embed in their development. This needs to be an emphasis of future resolutions.

This meeting is one of the most important in determining the future of our planet—it decides where and to what extent development will occur. The summit has the potential to make a huge difference and finally drive the changes that are needed. With such a big meeting, firm and explicit changes must be made on a much larger scale than previously seen. It is hard to have urgency with an issue that is yet to occur critically in the Western world, but we must ensure that this meeting is not a mere façade of care.

We cannot continue with the glacial pace of progress up to now. The conference will be deemed a success if nations stick to their own commitments. The flexibility of the pledges need to be taken seriously and each nation needs to prove its commitment to tackling climate change. If climate change is to be suppressed, it would be one of the greatest triumphs of mankind.