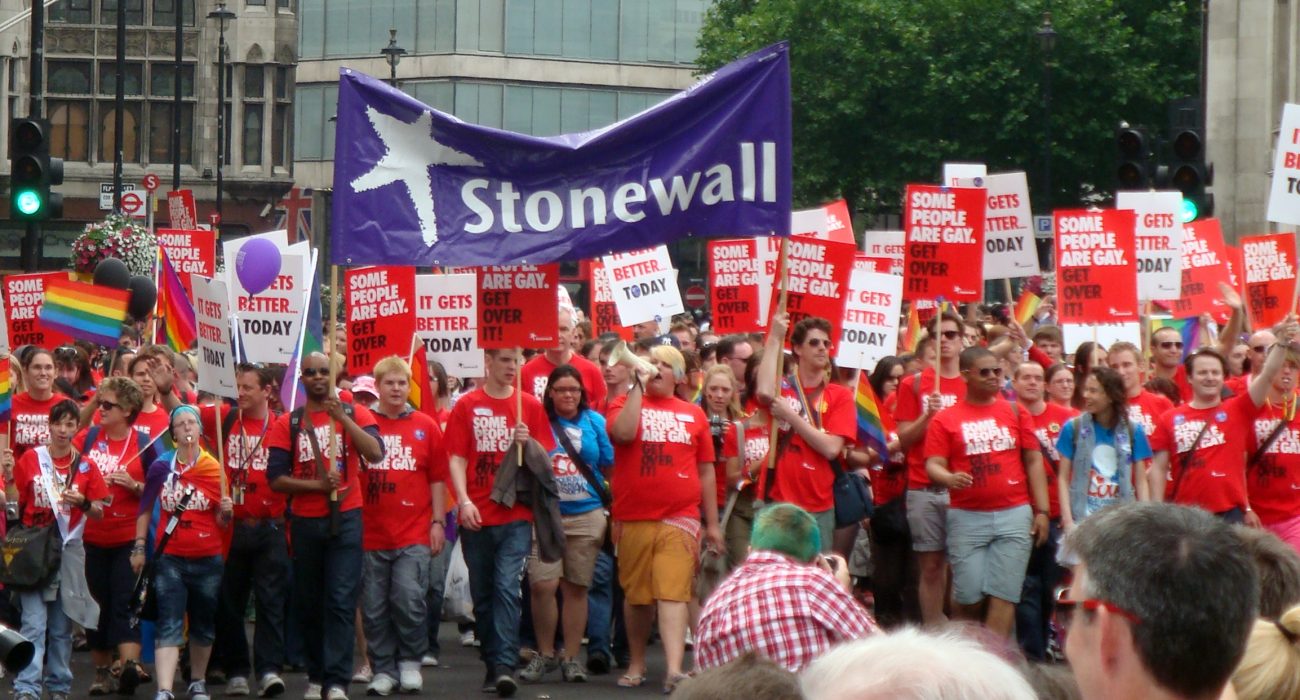 The Stonewall group works towards challenging homophobia, transphobia and biphobia in the workplace. Photo: Wikimedia Commons

The University of Manchester has been ranked 53rd in Stonewall’s top 100 employers for LGBT*-friendly workplaces.

A total of 12 universities were included in the list of Stonewall’s top 100 employers. The Stonewall group evaluates organisations across the country and provides a list compiled from submissions to the Workplace Equality Index in order to ascertain which institutions are the best workplaces for lesbian, gay or bisexual employees. About 400 organizations entered the 2016 Index. As part of the evaluation, employers are assessed on ten areas of employment practices in which 50,000 employees take part in a survey about gay-friendly policies in the workplace.

Ruth Hunt, Chief Executive at Stonewall, announced in the report that the Workplace Equality Index is taking significant steps in becoming more trans-inclusive: “Through consultation, feedback and gathering best practice, we’re developing a great sense of trans experiences in the workplace which will only continue to grow, and we’re fully committed to helping you drive trans-inclusion in your organisation.”

Responding to this recent development of the Work Place Equality Index becoming more trans-inclusive, Claudia Carvell, who currently works at the LGBT Foundation and finished her postgraduate studies at the University of Manchester in September 2015, says: “Whilst Stonewall’s 2016 report states that the ‘Top 100’ index has taken the ‘first steps to becoming trans inclusive,’ there’s inconsistency throughout the survey criteria as to whether it refers to inclusion of lesbian, gay, bisexual and trans (LGBT), or whether this is just about lesbian, gay and bisexual (LGB) inclusion.

“This is key because on a whole, trans and bisexual people tend to experience high levels of discrimination, both inside and outside of the LGBT community.”

The Security Service MI5 was awarded Employer of the Year 2016 and has moved from 134th place to first place within six years. Out of the 12 universities, Cardiff University was placed 20th on the list, followed by Swansea University on 36th place, Teeside (44th), Birmingham (50th) and Essex University a joint 53rd with the University of Manchester.

Carvell also comments on Manchester’s listing as a “gay-friendly” university: “It is definitely positive that attention is being paid to how inclusive workplaces are and that universities are being included in the ‘Top 100’.

“From my personal experience as an undergrad and postgrad student at the University of Manchester, I definitely believe that the University of Manchester deserves to be on the list—many of the staff I had the pleasure of being taught by were openly non-heterosexual and all of the staff—both academic and otherwise—that I ‘came out’ to in one way or another, were accepting.

“Throughout my degrees, I also worked as a University of Manchester member of staff in a bar on the Fallowfield campus: I was ‘out’ the entire time and felt completely supported by my colleagues.

“I think the work being done by the Equality and Diversity department and the LGBT staff network contribute significantly to the inclusive nature of the University of  Manchester for staff and, by extension, students. On top of that, Manchester is a more ‘gay-friendly’ city than many other places across the UK—largely due to the sense of community enabled by Canal Street and the volume of LGBT voluntary and community sector organisations we have to choose from.”

In her statement to The Mancunion, Natasha Brooks, the University of Manchester Students’ Union Diversity Officer, said: “It’s fantastic to learn that the university has been placed within the ‘Top 100 Employers’ again and that the score has increased this year.

“It is important that this acknowledgement is recognised and I hope that the university continues to take an active approach to address the ongoing issues that both LGB staff and students face as there is still a significant amount of work to be done. Furthermore, it is particularly promising to hear that Stonewall is working to include gender identity criteria.”

Nonetheless, according to Carvell, there is still progress to be made: “Anyone that works in this field knows there’s still a long way to go. Just tune in to the campaigns and debates happening across campus regarding the need to diversify our curriculum, our staff network and our student cohort—something that can only really occur if there is a genuine commitment towards equalising opportunities. Additionally, it’s important not to conflate the idea of being ‘gay-friendly’ with actually being inclusive of lesbian, gay, bisexual and trans people.”

The news of the university’s ranking within Stonewall’s top 100 employers comes conveniently in time for the LGBT history month in February, with events across the UK dedicated to challenging homophobia, biphobia and transphobia. The 2016 National Festival of LGBT History Conference will take place between the 25th and 28th of February and will take place on the campuses of both the University of Manchester and Manchester Metropolitan University.

A University of Manchester spokesperson said: “Each year it gets harder to get into the Stonewall Top 100, so for the University of Manchester to have again made the list is a tremendous testament to our welcoming environment and the hard work of our ALLOUT LGBT Staff Network Group in compiling the index submission and carrying out many other activities which contribute to equality and diversity on campus.”