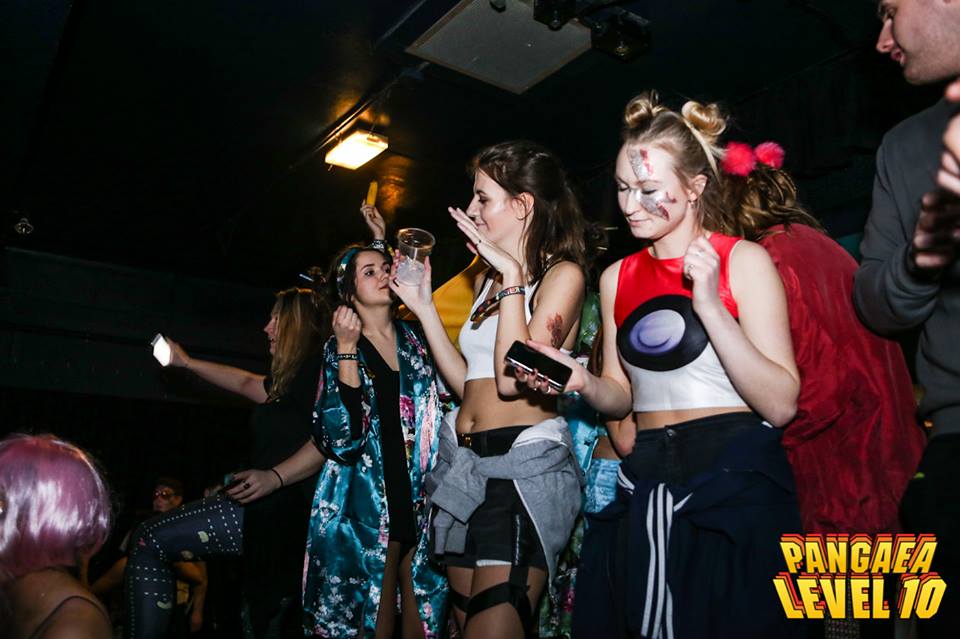 This year’s Pangaea was a resounding success—excellent decorations, great costumes, and a more relaxed atmosphere made it one of the best Pangaeas yet. Fittingly for Pangaea’s tenth anniversary, a higher proportion the mass of relieved students (having just finished their exams) wore costumes than ever before.

The choice of retro video games for the theme gave much more variety to attendees, who could draw on 44 years of video game history since Pong. However, a lot of attendees (including myself) were inspired by the events’ advertising and came as Space Invaders. It must be said that the advertising for this event was exceptionally done, including the Brick Breaker-themed advert.

Covering almost every game we can imagine, students came as Lara Croft, Spyro, Pac-Man, Crash Bandicoot, Mario, and there were even some table football figures—which, whilst being a great idea for a costume (if not quite what we were expecting), was rather annoying when they would run through the crowd and stick their arms out until someone knocked them down. The best of the costumes can be found, and voted on, in the Mancunion’s costume competition.

It was clear from the general vibe of the night that many more second and third years attended January’s celebrations than September’s. Indeed, there was less confusion regarding the stairs, and in general, a bit more calm.

More calm though, wouldn’t describe first arriving. This year, by 11:30, people seemed much more inebriated than usual. Crowds seemed rowdier (and sweatier) than usual too. If you arrived late like we did because you had to wait for Uber’s surge fare to go down—it didn’t—and then you gave up and got the bus instead, it was a lot harder to get into the easygoing Pangaea experience.

The crowd being so thoroughly ‘trollied’ by midnight meant that those who were less far gone had a more difficult time having fun as people fell over, argued, and at times fought. Nevertheless, as time passed, and more drinks were drunk, it became much easier to wind down and enjoy the festival.

Unfortunately, this Pangaea, whilst very fun for those of us drinking, was not a great Pangaea for people staying sober and those in our group who weren’t ended up leaving at around 2.

However, it did yield some funny, if not bizarre, occurrences, which included a Jessie from Team Rocket coming up to me and grabbing my cheek (where I had prominently transferred a temporary tattoo of Pikachu) and telling me she had caught me; a red Pac-Man Ghost came up to a friend of mine in the silent disco, removed her headphones and informed her she could change to different channels if she wanted to and was very excited to show us that the colours on the band changed every time you did! (Gasp!)

One group of students who didn’t drink helped raise money for charity, providing retro sweets for Luigis and Pac-Mans (Pac-Men?) everywhere to nibble on as cutting shapes to Katy B drained them of their strength. RAG’s contingent managed to raise over £600 shifting sweets, whilst Student Action raised over £500 running the cloakroom.

Pangaea wouldn’t be Pangaea without some sort of drama and this post-exam bash was no different. In June 1972, more than 3,500 miles away, President Nixon would not dare to have imagined students in Manchester would christen a scandal at Pangaea ‘Poogate’, in homage to his downfall at Watergate.

Poogate, the evidence of which is largely speculative and fresh off the rumour mill, was coined and well known throughout the festival by 5am, where news of it was spread all over campus as Semester 2 began the following Monday.

Missing Poogate (and also many of the acts), I managed to fall down the stairs leading outside from the Pokémon centre, which resulted in a brief hour-or-so visit to the medical tent. I’d only twisted my ankle (which still hurt a lot) but the medical tent was an interesting and completely different experience of Pangaea that we’ve (fortunately) never reviewed before.

The medical tent was staffed with kind, attentive, and very cold doctors and medics, who talked of the stressful but interesting experience working with 6,000-plus partying students. Despite just spraining my ankle, I had to stay for an hour talking to the doctor to check it was just a sprain. In that time various attendees arrived with injuries and mishaps of varying seriousness. Regardless of the unhelpfulness of a very drunk student trying to explain what they’ve done or being patronised and talked down to by a particular Mario, the staff were supportive and got on with helping everyone who needed it. Including, one particular partygoer who just really wanted a nap and dramatically ‘fainted’ in front of a highly trained medic, who happened not to be fooled by some highly skilled theatre. I’m sure there are many students who ended up in the medical tent who wish to thank the medical staff for helping us Lemmings out.

All in all, gripes and Poogate aside, this Pangaea was an excellent way to celebrate Pangaea’s tenth birthday and was enjoyed by most people—except for my poor cardboard space invaders, who snapped to their deaths during my tumble.