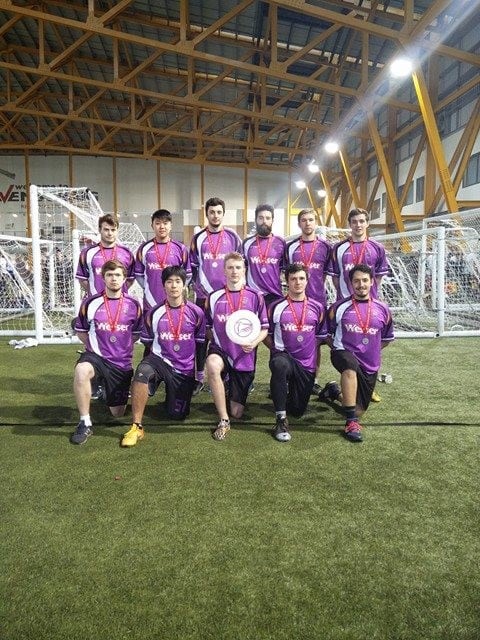 The performance of Halcyon over the weekend of the 6/7th February lived up to the successful history of the University of Manchester Ultimate Frisbee club. The University Indoor National Championship is an elite tournament between the top 20 most athletic and skilful university teams in the country. After an impressive win at university north-west regionals in November, Halcyon were expected to finish in a strong position at nationals.

Comfortable wins over lower seeded teams, Staffordshire University (10-6) and the University of York (10-4) gave the team the opportunity to gain confidence and to settle nerves for those at nationals for the first time. The University of Dundee proved a greater challenge for the team; equal scoring was maintained for the majority of the game. Importantly, Dundee were unable to produce many turnovers on the Halcyon offence. Eventually, the dogged defence of the entire squad contributed to turnovers that were converted by efficient offence. Halcyon eventually won the game 7-5 with composed attacking.

The University of Bath was the final group game and proved to be a turning point for the weekend. After making a very strong start to the game and moving to 5-1, a small amount of complacency allowed Bath to win the next 6 points. At 6-5, with Bath needing only 1 more point to win, Halcyon displayed commendable grit to level the game 6-6 and produce universe point (next point wins). Bath had the first opportunity to score and Halcyon had to force a turnover of possession before having a chance on offence. A well-timed, layout block from Oliver Gray did just enough to produce a turnover of possession and gift Halcyon a chance to top the pool. After some incredibly nervous offence, Halcyon scored to win the game 7-6.

After a wakeup call by the University of Bath, the team produced a dominant performance to beat University College London and progress, with 3rd seed intact, into the quarterfinals. After rest and recuperation of Saturday night, the Sunday morning quarterfinal versus the University of Strathclyde was a test of who could start the better team. Halcyon offence stuttered into life and despite the impressive layout block of Evan Smith, Strathclyde took a lead that was maintained for the majority of the game. With the prospect of being knocked out of medal contention at 6-4 down very much eminent, Halcyon held their nerve to attain 6-5. In front of a loud, patriotic Scottish crowd, Strathclyde only had to convert one of their final next two chances to win the game. Nerves and some great pressure defence from both teams produced multiple turn-overs and after a display of true grit and skill, Naoki Gotoh displayed a cool head under pressure to convert and produce the second universe point of the tournament at 6-6. For the second time, a block was required and another layout block from Oliver Gray allowed for a short pass to Pepe Espinosa to win and progress to the semi-final. The Scottish crowd became noticeably quieter while Manchester celebrated.

Halcyon’s path to the national final was yet again challenged by Scottish dreams in the semi-final. The University of St Andrews had put together a strong display throughout the tournament. Halcyon, fresh from the tumultuous experience of their quarter-final, produced an outstanding display of shutdown defence and ruthlessly efficient offence from the entire squad to move into an early lead that was maintained until the end of the game. The dominance of the performance was exemplified by a huge reception in double coverage by Pepe Espinosa to win the game 7-5.

After a long break, the team prepared well for the final. The University of Birmingham had experienced a far less dramatic route to the final and, being the only team to have beaten Halcyon indoors in three years, were the favourites. High class, clinical offence epitomised the entirety of the game and both defences struggled to produce turnovers. In particular, Steve Dixon dominated the statistics and united the offence. Unfortunately, on the occasions where Halcyon could produce a turnover, offensive inexperience of the defensive players in high pressure situations meant the team couldn’t convert the turnovers into points. Eventually, Birmingham’s defensive pressure told and a break in the offensive exchange meant that they took a one point lead to 7-6. Halcyon were able to maintain composure on offence and a huge layout score by Bart Garcia took the game to 7-7; however, Birmingham’s offense scored the subsequent third universe point of the tournament, despite enormous defensive pressure from Manchester’s Khoo Soo Thong, to win the game and the national title 8-7.

After a successful campaign, Mancunian heads now turn to the outdoor season, with the fantastic support of new sponsor, Wesser. After winning a silver medal indoors and bronze medal at last year’s outdoor national tournament, Halcyon will once again be one of the favourites to become national champions. The question remains as to whether ornot the dominance of the University of Birmingham can be broken. Again, watch this space, Halcyon will be back in April!