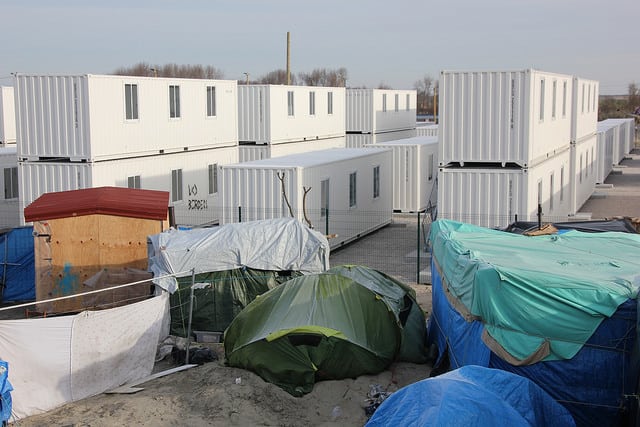 At the time of writing, France is preparing to bulldoze half of the Calais migrant camp, also nicknamed “the jungle”. Between 800 to 1,000 people will be evicted and ‘re-housed’ in adapted shipping containers. At risk of being bulldozed by the authorities are important communal spaces: churches, a mosque, shops, and schools—as well as other people’s homes. The current situation in Calais appears to be a remarkable one. But the few thousand living in the jungle are amongst a billion that live in informal, ‘slum’ conditions across the world. The situation is a throwback to our urban history, and might also be precedent for our future urban policy.

Slum clearances are a regular feature and important process of the urban history of the developed world. As the ‘first industrial city’, Manchester experienced very high levels of clearance itself. Even in the present day, authorities still come into conflict with informal settlements— the evictions at the Ark shelter near Manchester Metropolitan University, for example. From Rio to Istanbul, Cairo to Nairobi, slum clearance is the go-to policy in the present day of most developing nations. The policy has been, and is, painfully continued in urban policy, despite swathes of literature, campaigns, and protest that argue against it.

Some writers, such as Mike Davis (Planet of Slums), claim that the slum clearance projects of the developing world are inseparable from colonial power legacies, and that they have benefitted only the wealthy landlords. In this sense, it is assumed that those traditions are in the past for the developed world. But the Calais jungle is clear evidence that policy makers still do not understand slums.

The claim made by the prefect of Calais, Fabienne Buccio, is that by halving the number of people living in the camp would be “acceptable to the local population”. What she fails to note in this particular comment is that ‘the jungle’ inhabitants were originally evicted from the town itself and then directed to an area of wasteland outside of the town. The camp is already fairly severed from the local economy and also has divisions within itself—with claims of ‘Muslim-only’ areas being no-go areas for the police. Tearing down parts of the camp, and the intricate socio-economic relations in those communities, will only be to the detriment of the camp dwellers.

The greatest assumption in slum policy, as demonstrated by the French authorities, is that people prefer ‘nicer’ housing. One powerful example is the failure of re-housing of those in the ‘slum-like’ areas of Paris into tower block suburbs. The result was the loss of informal but important communal relations, and therefore poverty and violence continued. Thus, when it is claimed that the re-housing into shipping containers or the distribution of some of the camp dwellers across France will be beneficial, we must be very skeptical.

The terms ‘refugee’ and ‘migrant’ have been contorted and abused by the media and both ends of the political spectrum. Let me clear something up. A refugee is a type of migrant—a forced migrant. It is the left that frustrate me the most with the use of these two terms. ‘Refugee’ has become a term with connotations of sympathy and those cringe-worthy ‘we’re all humans’ kinds of slogans. This generalisation is disrespectful to the vast quantities of research into the processes of migrant integration. These connotations are used to support the narrative for European governments to accept more migrants, regardless of the fact that very little  EU refugee protocol has been followed properly, and that we know that the factors of war and persecution are not the only factors that result in migration—not all are ‘refugees’.

Encouraging migration is not the best long-term policy. Instead, those within Europe should be encouraged to stay in the country that they presently find themselves in, with the flexibility to migrate to urban areas. Aid should be given to those countries that will have higher numbers of migrants, such as Greece. By allowing roots to set down, communities will be created, markets will form, and with good government intervention—provision of water, transport, electricity, for example—stable communities will hopefully flourish. ‘Distribution’ of migrants is both disrespectful to their humanity and ineffective as integration policy. Therefore, the Calais camp should be invested into and it should be allowed to develop as a new French community. This would hopefully reduce crime, and control numbers of attempts to cross the channel in the long-term.

We may view the example of the Calais migrant camp as a stage and precedent for the future of integration policies. Within the next few decades, there will be a dramatic increase in the volume of migration resulting from environmental change (there is much academic dispute as to how many ‘climate migrants’ there will be). Many of these people will require the refuge and assistance of environmentally stable regions; of which, much of Europe can provide. We do not know how to deal with these questions, and I concede that I have avoided them. But what I do know is that, at what might be considered just the beginnings of mass-migration into Europe, poor urban policies are already in use.
The jungle says a lot about our societies. Quite simply, we are overly wary of poorer and more informal communities. In Manchester we clear out the homeless from the streets, in Calais, tents are cleared from wasteland, and the ill-founded consensus around slum policy rumbles on. We fail to respect the homes that don’t look like houses, and the communities that aren’t paved with concrete.