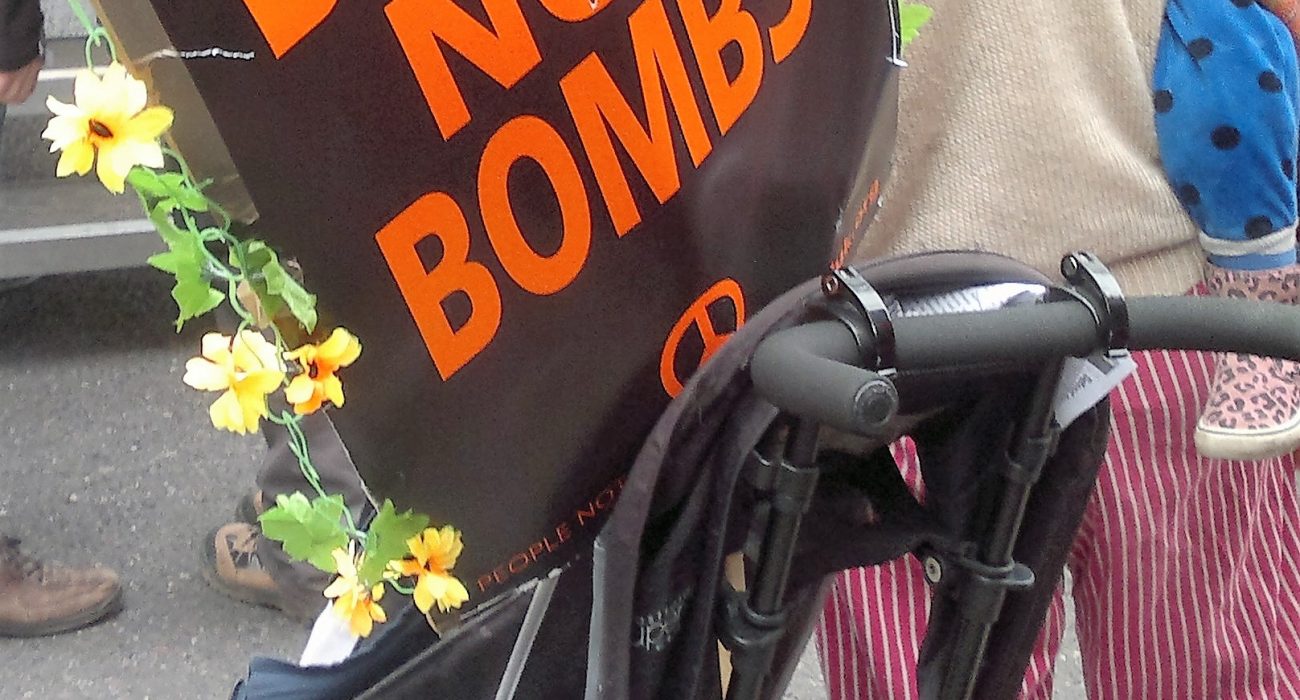 Students from Manchester joined protestors in London for an anti-Trident demonstration. Photo: The Mancunion

Anti-nuclear protestors from Manchester joined tens of thousands of campaigners in London this Saturday at the Stop Trident rally to dissent against government plans to build a new nuclear weapons system.

People of all ages gathered at the rally, organised by the Campaign for Nuclear Disarmament (CND). A strong Scottish contingent was distinguishable beneath the banners, and the sound of bagpipes encouraged demonstrators on through the city.

Many there appeared to be regular attendees at such events, with t-shirts and badges simultaneously highlighting commitments to other causes. One protestor, who had travelled from Wales, told the Mancunion how she had been involved with CND since the 80s and continued coming to anti-nuclear demonstrations to voice her view that such weapons are “illegal, immoral, and a waste of money”.

Others were newer to protesting. One woman revealed that she had previously been in the RAF, at times working with nuclear weapons, but had since changed her views on nuclear weaponry. This was her first protest, which she had chosen to attend in the belief that “we all have to do something”.

The march ended in Trafalgar Square where members of CND and ‘MPs Against Trident’ stood beneath Nelson’s Column as protestors filled the square. Kate Hudson, General Secretary of CND, rallied the crowd by describing the event as “the largest anti-nuclear demonstration for a generation”—a statement later echoed in the Guardian—before introducing speakers that included leader of the Scottish National Party Nicola Sturgeon, chair of CND and Green Party MP Caroline Lucas, and leftist writer Tariq Ali.

The Conservative government argues that replacing Trident will help create jobs and protect the UK’s security but those speaking criticised the plan – that will cost an estimated £167bn – for making the country more vulnerable and using money that would be better spent elsewhere, such as on the NHS and schools.

Sturgeon questioned how the UK could expect to persuade other countries to disarm whilst it continued to itself own nuclear weapons. Lucas, referring to Trident as “a reckless vanity project that makes us less safe not more safe,” argued for greater investment in environmental issues to increase national and global security.

Opinion on whether Jeremy Corbyn would make an appearance had been mixed throughout the day, after some Labour MPs had condemned his decision to attend, claiming it contradicted current party policy. Yet, true to his word, he appeared as the ultimate speaker to deafening applause, stating that his belief in “a nuclear-free future” was behind his attendance.

He announced that, if elected as Prime Minister, he planned to replace Trident with jobs that “retain the community’s skills.” He also implored fellow MPs, when voting later this year on whether or not to replace Trident, to consider the “humanitarian effects on wholly innocent people anywhere across this globe.”

According to recent estimates, 100–130 of Labour’s 232 MPs are planning to vote to renew Trident, despite their leader’s outspoken opposition to nuclear weapons. Only one Tory MP is likely to oppose the plan, whilst the SNP and Green Party have both declared their opposition to its renewal.

Manchester CND reported that they were pleased with the turnout of Manchester students among campaigners and said they will be holding a planning meeting in the coming week to discuss how to further engage with the local community. They also mentioned plans to form a young people’s group within Manchester CND.