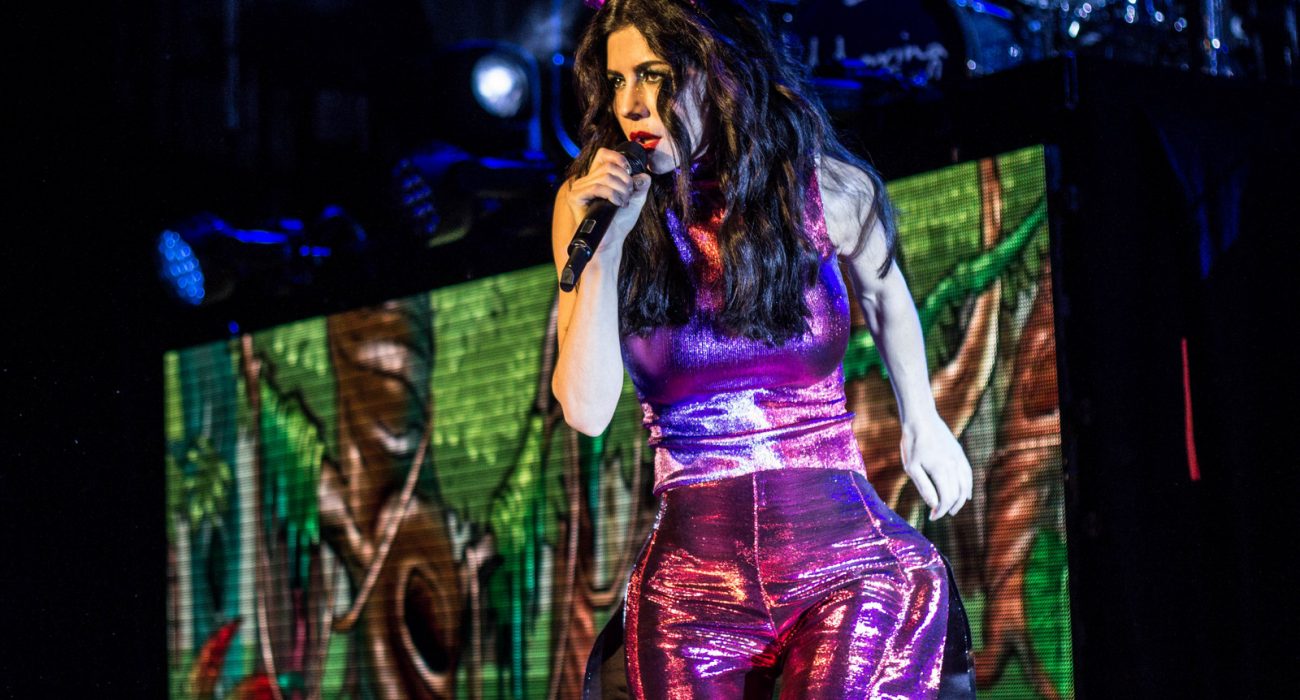 Fish out of Water: Marina and The Diamonds

It’s fair to say I didn’t know a lot about Marina and the Diamonds—unless you count the two tracks that I accidentally synced onto my iPod from my sister’s iTunes a couple of years back. Not really being a pop fan, and normally used to seeing DJs or predominantly male rock groups, Marina’s gig was certainly different from how I expected it to be. I have been lucky enough to see some of my musical heroes perform, but I can honestly say that this was one of the most fun moments I’ve ever had at a gig.

The first noticeable thing upon entering the Ritz was the crowd. The devoted level of fandom was unlike anything I had ever experienced. Alongside the expected teenage fan girls, grown men and crying teenage boys were going crazy to every single song. People on the front row were holding banners with messages for Marina. One even had a drawing of the singer; which after an hour of holding it in his outstretched arms, finally managed to give to her. To my surprise Marina wasn’t overwhelmed by such a hysterical crowd, despite it being a rainy Monday night in Manchester, she took it all in her stride.

The gig itself was loud, eccentric and brilliant. Split into three segments (each to cover one of her three albums) the set up was pretty mental. With each album change, came a costume change. Each one more elaborate than the last, the costume transformations were fantastic. Combined with the musical changes, the whole thing almost felt Bowie-like; yeah I’ve said it: Bowie-like. Thankfully the band carried on playing over a visual backdrop during the intervals so the gig never dropped in pace.

Marina herself was a star performer. She didn’t remain still for the whole set, and instead danced away enjoying herself and interacting with the crowd. It was a pleasure to see a singer enjoy their own music so much and treating their fans so well, and not as just walking wallets like most pop stars do these days.

Early music from The Family Jewels such as ‘Oh No!’ and ‘Hollywood’ may have been light-hearted and jokey, but it’s joyous. My favourite track of the night, ‘I Am Not A Robot’ was from this first segment.

The second transformation for Electra Heart was definitely the weirdest with Marina bringing out a strange toy dog and labelling it her crack addict pup. New music from album Froot is more serious and brooding. It’s ironic that ‘I’m A Ruin’, which starts as a sensitive piano ballad is surprisingly upbeat in its lyrics, while the bouncy ‘Blue’ has deep lyrics referring to her break up, but this is part of her genius.

If it hasn’t come across already, I thought Marina was great. Her voice was subtle yet powerful, allowing her to hit beautiful notes that captivate the audience. Compared to most other pop stars on the scene nowadays like Miley Cyrus or Nicki Minaj churning out crock after crock of shit, we should celebrate a homegrown talent like Marina more.