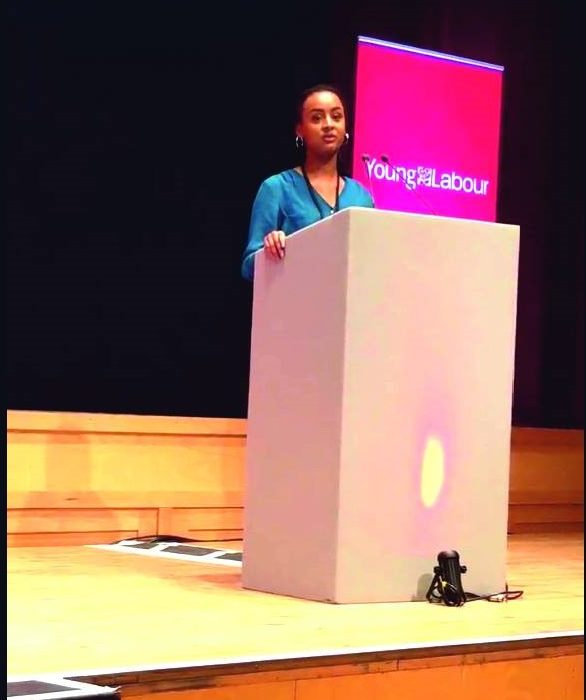 The youth wings of the Labour Party have been rocked by further allegations of “institutional racism” and infighting in the aftermath of the Young Labour and Labour Students Conferences in Scarborough over the weekend of 26th – 28th February.

Huda Elmi (pictured), who is the Black, Asian and Minority Ethnic (BAME) Officer of Labour Students, told The Mancunion that she and other BAME Young Labour members “felt invisible within the structures of the organisation.”

Elmi cited the fact that, at conference, a Labour Students vote was held whilst BAME members of the party were holding a separate caucus outside the conference hall.

She described the situation as “almost a joke… It was as if they were trying to prove that the major grievance of being invisible is true.

“How could they not notice that every BAME person was missing?”

Elmi also highlighted the fact that the position of BAME Officer at Young Labour is currently vacant, and has been for the last six months, after the incumbent stepped down for personal reasons.

She added: “Ever since being elected [as Labour Students BAME Officer], I have been left out of important discussions concerning the committee, refused the tools to act in any kind of autonomous way, and made to feel essentially like a token.

“It is blatantly obvious that we were not present bar in pictures used in brochures… We were not heard unless we were spoken for.”

A senior source from Nottingham Labour Students, who was also at the conference, told The Mancunion he believed the caucus issue was the result of “human error” and was not an intentional slight, but it highlighted the issues BAME members face in the Labour youth movement.

He went on to state his belief that “BAME members were particularly vulnerable to some of the negative aspects of factionalism and inter-camp bullying and intimidation that was noticeably prevalent at conference.”

Two separate conferences were held over the weekend: A Labour Students conference met over the Friday and Saturday, with delegates from Labour Students clubs across the country electing their national officers and deciding policy for the coming year.

Young Labour, which consists of delegates representing all members under the age of 26, met on the Saturday and Sunday to elect their officers and debate policy.

Mo Ahmed, the Co-Chair of Manchester Labour Students, resigned his position on the Saturday night of the conference. In his resignation statement, he lambasted the treatment of BAME students within the youth wings of the Labour Party, saying: “We don’t feel welcome. We are totally invisible.”

Ahmed was, according to Elmi, “one of the only Labour Students BAME chairs in the country” and the fact that he felt his resignation was necessary demonstrated “something is wrong with the system”.

Elmi and Ahmed both gave speeches at the Young Labour conference the day after the latter’s resignation. Their speeches received standing ovations.

In her speech, Elmi expressed her disappointment at Labour failing to live up to its reputation as the “party that promises to be at the frontline, fighting for marginalized groups.”

She also stated her belief that there is “no suitable infrastructure to make sure ethnic minority people are represented in internal politics.”

Following the speech, and as a further response to the racism allegations, BAME members of Young Labour took to Twitter and started the hashtag #IAMNOTATOKEN.

The allegations of institutional racism compound the issues engulfing Labour’s youth wing, following the resignation of the co-chair of Oxford University Labour Club (OULC) after the club’s decision to endorse Israeli Apartheid Week, and accusations of bullying and voting irregularities during the election of the National Executive Committee (NEC) Youth Representative.

Elmi drew a distinction between Labour’s national leadership under Jeremy Corbyn—whose summer leadership campaign she cites as her reason for getting involved in the party—and the “mess that is Young Labour”.

Despite these issues, Elmi hinted she was hopeful about the future, though warned: “Representation without structural change is simply tokenism.”

She said: “The incoming Young Labour committee has to listen to the voices of their BAME members so that we can succeed in our collective fight.”

A report into the bullying allegations is being led by Labour peer Baroness Janet Royall, whilst Elmi is also writing her own report into the events of the conference, where she is “collating personal testimonies and creating recommendations for Labour Students so as to help further integrate BAME members into the organisation.”

In a statement, Manchester Labour Students said: “This conference has raised important issues within our movement. We will support all four of our liberation campaigns—respecting their autonomy—in order to ensure that the diversity of our movement is fully and meaningfully represented.

“We would like to thank Mo for all of his hard work and dedication in what has been a difficult few months for Manchester Labour Students. He has been an invaluable member of MLS.”

“Investigations are currently underway into the conduct of individual Young Labour Party members. All relevant evidence will be considered.”