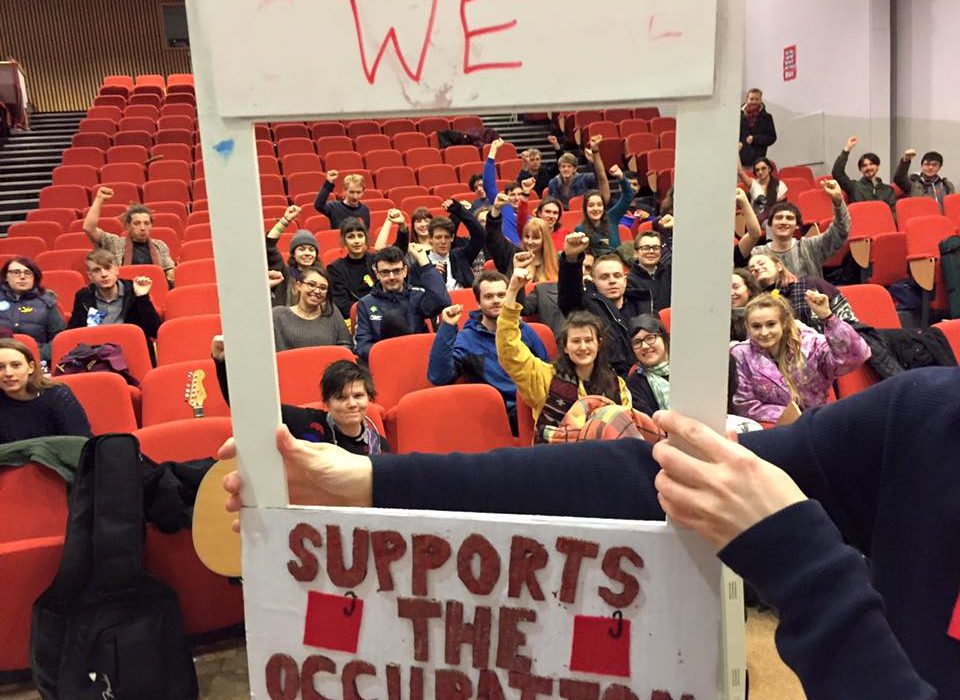 The students claim they have yet to receive an adequate response from management Photo: The Free University of Sheffield Movement

The Free University of Sheffield movement has been occupying the Richard Roberts Auditorium for over a week to demonstrate against “the current assault on higher education”. Shemina Davis, Sheffield’s Media Relations Manager, confirmed to The Mancunion that the university has in fact taken out a possession order against the protesting students.

Christy McMorrow, the Students’ Union President, appeared in court yesterday to represent the protesters. He said that some academic staff members supported the movement and that the demonstrators did not intend to disrupt teaching.

Reports indicate that the protesting students received an email from the University of Sheffield management on Thursday, 3 March stating that: “We would much prefer it if the occupation could be brought to a swift conclusion.” Judge Robinson was later quoted as saying that students have a “free and democratic right” to protest against the quality of higher education. However, since the University of Sheffield is the rightful owner of the Auditorium, Robinson would be willing to grant the university’s possession order.

In their press release, a spokesperson from the University of Sheffield said: “As a university, we fully support freedom of speech and the right of students to express their views peacefully and within the law. The university recognises the commitment of the occupiers to peaceful protest, however cannot condone occupation of a building that could cause disruption to our staff and students.”

The demonstrators have conducted general meetings to discuss their concerns about access and quality of higher education. Their aim is to protest peacefully for “an education that is free and fair.” Outlining their intentions to occupy the auditorium on campus, the students stated: “In recent years, we’ve seen the complete separation of the public from our ‘public’ education system.”

“In this era of marketisation, we’re seeing students treated as consumers – to be passive recipients of information for the sake of employability—rather than producers of knowledge.” The protesters claim that student fears of debt and competitive job markets have jeopardized the “reciprocal engagement between academic and student which should underpin learning in the university.”

During their occupation of the auditorium, the Free University of Sheffield movement delineated their four main objectives. Firstly, protesters advocate the university active resistance against the reforms of the higher education green paper.

Secondly, they are demanding regular open forums between the vice-chancellor and students and for the University of Sheffield management to “publicly pledge non-compliance” with the government’s PREVENT programme which they deem “racist and Islamophobic.” Finally, the students want to see an end to “unfair casualised teaching contracts.”

A spokesperson for the University of Sheffield responded to these demands, saying: “the university understands that the increasing marketisation of higher education is rightly an issue very close to the hearts of many of its staff and students and along with universities across the country, we have outlined these concerns in detail as part of our response to the government’s Green Paper on Higher Education.”

The protesters expressed their resentment against management’s hypocrisy stating their confusion that the university is “content to let us freeze” even though “excessive security provisions” were ordered for the students’ safety.

As part of the campaign, the students organised rallies, a poetry night, stand-up comedy performances, and also hosted a gig-night with special guests such as Grace Petrie—an activist and folk singer-songwriter. Additionally, the demonstrators have reached out to management on multiple occasions asking them to join them in a series of workshops set to take place in the week where the students’ objectives will be discussed in detail.

The demonstrators have yet to receive a response. McMorrow is hopeful, however, that talks between the protesters and university management will take place after the case is finished in order to discuss the students’ demands further.