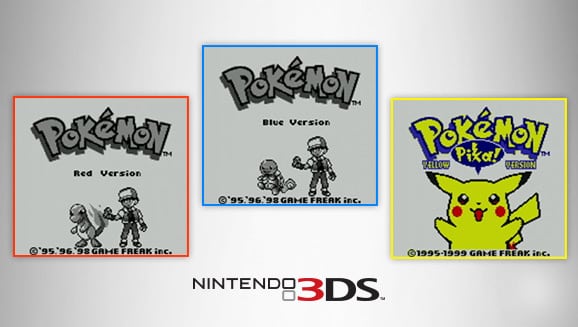 A few weeks ago we had what was collectively known across the internet as ‘Pokémon Day’. This celebration happened on February 27th, 2016, 20 years to the day after the release of the very first Pokémon games in Japan. Its amazing to see where Pokemon has come since then and this day was just one of the many planned events that Nintendo and the Pokémon company have laid out to celebrate the 20th anniversary of their beloved franchise. To go along with these celebrations, Nintendo decided to tap into the ever-fruitful nostalgia pipes by re-releasing the very first Pokémon games on the Nintendo 3DS eshop as a Virtual Console title. For us in the United Kingdom, this means getting to relive the original two Game Boy titles, Pokémon Red & Blue, as well as the third version of the game released for Game Boy Color: Pokémon Yellow. This is a game that many of us will have grown up with, regardless of whether we called ourselves a gamer or not, but after 20 years do these games still hold up? The short answer is just about, but for the long answer you are going to have to keep on reading.

The first thing to do when reviewing any Pokémon game is to specify why there are multiple versions of the game. As stated above the game has three different versions, all named after a colour, and these three different games are for the most part the same experience. The reason for having two versions initially was to emphasize the idea of trading Pokémon. The series slogan was ‘Gotta Catch ‘Em All’ but with just one version of the game this was actually an impossible feat. See, out of the 151 Pokémon included in the first generation of games there was 12 Pokémon missing in each version, 11 of which can be obtained by finding someone with version of the game you did not own and trading with them (while the last Pokémon was Mew who could only be obtained via a special event or through glitches).

Trading was a major part of the Pokémon franchise and its appeal and in these 3DS re-releases trading has been made even easier. You now no longer require a long cable to connect your Game Boys together as the 3DS can trade over wireless with one another. This with the promised addition of Pokémon Bank support in the future means that trading has never been easier. Pokémon Yellow also has its share of Pokémon that are unobtainable but the appeal of this third game was different. Pokémon Yellow not only had the addition of colour and slightly better looking graphics for the monsters but it allowed you to follow the story of Ash, the Anime’s protagonist. You are forced to start with a Pikachu, just like him, and certain Pokémon locations have been moved around to match how it was in the show. Apart from all these specified differences the games play exactly the same so when picking which version you wish to play you only need to take this paragraph into consideration.

If the gameplay of Pokémon  is not already ingrained into your body, right next to how to ride a bike and the proper way to hold your cutlery, then allow me to enlighten you. In Pokémon you play as a young boy who sets off from his home in Pallet Town to become a Pokémon master by travelling around the region of Kanto, capturing various different Pokémon, defeating the eight gym leaders and working your way up to battle the Elite 4. In order to do all this though you need a Pokémon and you need to train it up through battles. Everyone remembers their first ever Pokémon and in this game you get the choice of Bulbasaur, Charmander or Squirtle (or you get a Pikachu forced on you when playing the Yellow version). Each of these Pokémon have a special type being Grass, Fire and Water respectively, and this helps to show new players the type mechanic in a rock-paper-scissors style of gameplay. Grass beats water which beats fire, which beats grass. Taking advantage of these types and knowing which type your opponent has is the way you are going to win all the battles that come your way. Battles play the same as they always have done with your options being to attack, run, use an item or swap out a Pokémon. However, due to this game being the first in the series the battle system is very simplistic. This game does not follow the same rules as future installments and it has less types to consider. This is something that Pokémon veterans should keep in mind, but for brand new players it makes these games a great starting point as there is less to consider.

A big part of this game is its simplicity and while this makes it good for new players in some aspects, it also makes it a chore in others. While all the menus are simple and obvious in their layout there are some obvious missing features that are caused by this game launching when it did. There are not any quick-button options available and a lot of the benefits found in future games like the ability to run and not losing certain items after one use are completely absent in this game. For veteran players this will make this game seem like more of a chore than it needs to be and for newer players it may come off as just too out-of-touch for a modern audience. With all that said it does not ruin the game and I myself, as someone who has been following Pokémon for the last 20 years, did not find these issues as deal-breaking as some others might have.

My view could possibly be blocked by nostalgia but that is not necessarily a bad thing. Everything from the graphics and music in this game makes me think back to my childhood and the fun I had playing these games and it made me want to continue. This is certainly a good thing and I found myself enjoying the game immensely as I worked through it. If you are a big fan of Pokémon and had fond memories of it growing up then I almost certainly recommend re-buying these games, especially if you no longer have your old carts or if the battery died in them (an issue that you don’t have to worry about here). If you’ve never played a Pokemon game before then I also recommend using this game as an entry point. If you can stomach a few ageing gameplay mechanics then you will find a very enjoyable monster-hunting RPG. The game is simple enough that you will not feel overwhelmed by picking it up and may end up becoming a fan of the series yourself. However, if you are already a Pokémon fan and had no memories of the old games because you started later on then it really comes down to your motivation. If you are curious about where the series first began then definitely give this game a go, however if that is not your goal then you might be better off sticking to the more recent titles. A lot has changed in the last 20 years and the current games are certainly more user-friendly in some regards.

With the release of these games, Pokémon’s 20th anniversary is off to a great start and with Pokken Tournament and Pokémon Sun & Moon on the way, this is certainly looking to be a good year for everyone’s favourite collectible monsters.