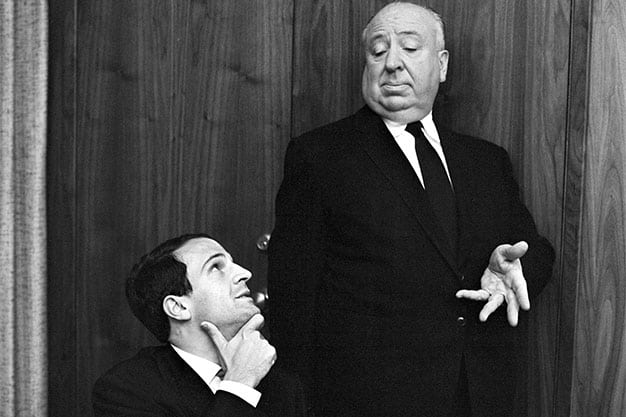 HOME Pick of the Week: Hitchcock/Truffaut

An enigma, genius and the ‘master of suspense’ all tip the iceberg upon the discussion of the man that is Alfred Hitchcock. The nature of Hitchcock is full well know in today’s society, but was something lesser known to his contemporaries. Yet fellow filmmaker, François Truffaut, saw Hitchcock for whom he really was—a true artist and auteur. This notion was developed in his 1966 book, Cinema According to Hitchcock. The book offered an in-depth insight into the mind of the director through transcribing the dialogue of extended interviews that were held between the two greats. Similar to their respective film, the text influenced generations of cinephiles into understanding the manner of Hitchcock’s work, alongside becoming a holy grail to many directors. The explorative nature that was at hand from Truffaut is centralized into Kent Jones’ latest documentary, Hitchcock/Truffaut.

As much as Jones creates an autobiographical piece for Hitchcock—outlining his origins as a title card designer and continual growth into the film industry—an atmosphere of critical appreciation towards such films like Rear Window, The Birds and many more is paramount. The narrator, Bob Balaban, is articulate in this manner. Through incorporating a wide variety of acclaimed directors as Martin Scorsese, Richard Linklater, Wes Anderson and Kiyoshi Kurosawa in the role of talking heads only serves to underline the cinematic importance of Truffaut’s book. Their discussion is not only key in developing the contextual background for the book, they also serve as significant reminder of the impact of the text, alongside both director’s works. Their passionate interviews place them amongst us—the audience—into our cinephilic nature.

Being an auteur, in theory, brings along with it boundaries in audience’s expectations for a director’s distinct style. Similarly, in regards to Stanley Kubrick, audiences of the time perceived Hitchcock as simply outstanding at one thing—suspense. Truffaut, however, saw past this social stigma in recognising and appreciating all of Hitchcock’s films as individual, and rejected to succumbing to audience’s stereotypes for Hitchcock as a director. In playing with audiences, Hitchcock transgressed the barriers of cinema in classics like Vertigo and Psycho. Jones is quick to draw attention to this particular factor in using them as a base for discussion and exploration.

Hitchcock/Truffaut is fully deserving of its subject matter and baring the title of two of the greatest film makers to have lived. Its deep focus on Hitchcock himself does not really leave any room for discussion up Truffaut as paramount to the French New Wave movement with films like The 400 Blows. Nonetheless, Kent Jones has created something that is a must see for any avid film lover and film enthusiast.