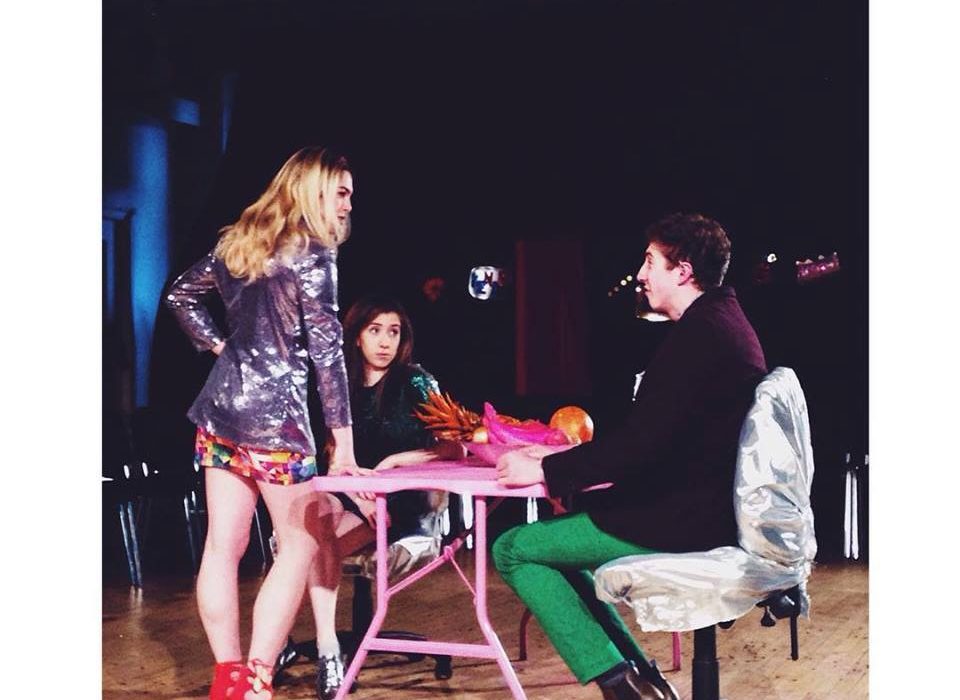 Review: An Evening With The Voices In Annie’s Head

Every year the University of Manchester Drama Society offers new theatre-making opportunities to students from all degree levels and subject departments as part of the Manchester In-Fringe Theatre Awards (MIFTAs). This year, An Evening With The Voices In Annie’s Head, a play written and directed by third-year music and drama student Sarah Teale, tackled pertinent contemporary issues surrounding young people and mental health.

Annie is a shy university student who can barely interact with her best friend, let alone the rest of the world. While her mouth remains firmly shut, her brain fizzes with activity. The contrasting worlds of Annie’s imagination and reality reveal to audiences why one should never judge a book by its cover. Annie handles her daily experiences and thoughts by imagining she is being interviewed and advised by two exuberant and boisterous television show hosts, Ken and Kendra Kenderson. As Annie becomes increasingly troubled by the influence Ken and Kendra have over her life and behaviour, she attempts to resist them and ignore their consistent cruel commentary. Teale’s play is a hyperbolic enactment of the inner experiences of an anxiety sufferer. Illuminating and thought-provoking, An Evening With The Voices In Annie’s Head is a disturbing reminder of how silently destructive mental health disorders can be.

The concept underpinning Teale’s play is complex and clever. It is inherently difficult to present on stage the intricate thought processes and complex goings-on of the human brain, yet Teale created the perfect framing device by which to put across the feelings of self-judgement and self-analysis that come with anxiety in her portrayal of Ken and Kendra. Scenes depicting Annie’s real-life experiences are interspersed with scenes presenting her being interviewed and interrogated by the presenters in her mind. As the play goes on, Annie becomes increasingly overwhelmed by her own feelings of self-doubt, to the point where she responds to Ken and Kendra’s criticisms out loud in front of her friends. The energy and wit of the two fictional characters that live in Annie’s head demonstrate Annie’s innate creativity and strength of character. Presented in contrast with the painfully awkward conversations Annie has with her friends, the crippling and repressive nature of anxiety come to light.

As premiere performances of student writing, MIFTA productions cannot be expected to be without fault. While Teale certainly succeeded in putting her overall point across about the profoundly harmful nature of mental health disorders, the execution was not flawless. The play was lengthy and overly drawn-out. While this added to the initial impact of scenes depicting the awkwardness Annie feels during social situations, the point had been firmly communicated far before the end of the play. The lengthy silences between sentences became painful in a less evocative way, and it became difficult to retain interest in the plight of the characters. Ken and Kendra were depicted in scene after scene relentlessly breaking Annie’s spirit, consequently their words became less and less shocking and intimidating as the audience became used to hearing their streams of cutting insults. The play often lacked a sense of plot progression and the audience’s interest in the piece was not consistently suspended. It seemed that Teale’s point might have come across more successfully in a concise one-act structure.

The acting and design aspects were well-executed, and the performances of Dominic Varney and Mia Nuttgens as Ken and Kendra Kenderson were particularly memorable. The characters were portrayed with unnerving convincingness, striking genuine fear into the hearts of the audience on behalf of Annie. Despite the use of minimal set, a massive contrast was clearly struck between the two separate worlds of Annie’s experience. This revealed a real ingenuity on the part of Sarah Teale and producer, Georgia Affonso.

Whilst certainly not flawless, An Evening With The Voices In Annie’s Head was hard-hitting and emotive. As with each of the plays presented as part of the MIFTAs this year, Teale’s play was a wonderful demonstration of the ever-evident potential of up-and-coming student theatre-makers in Manchester.