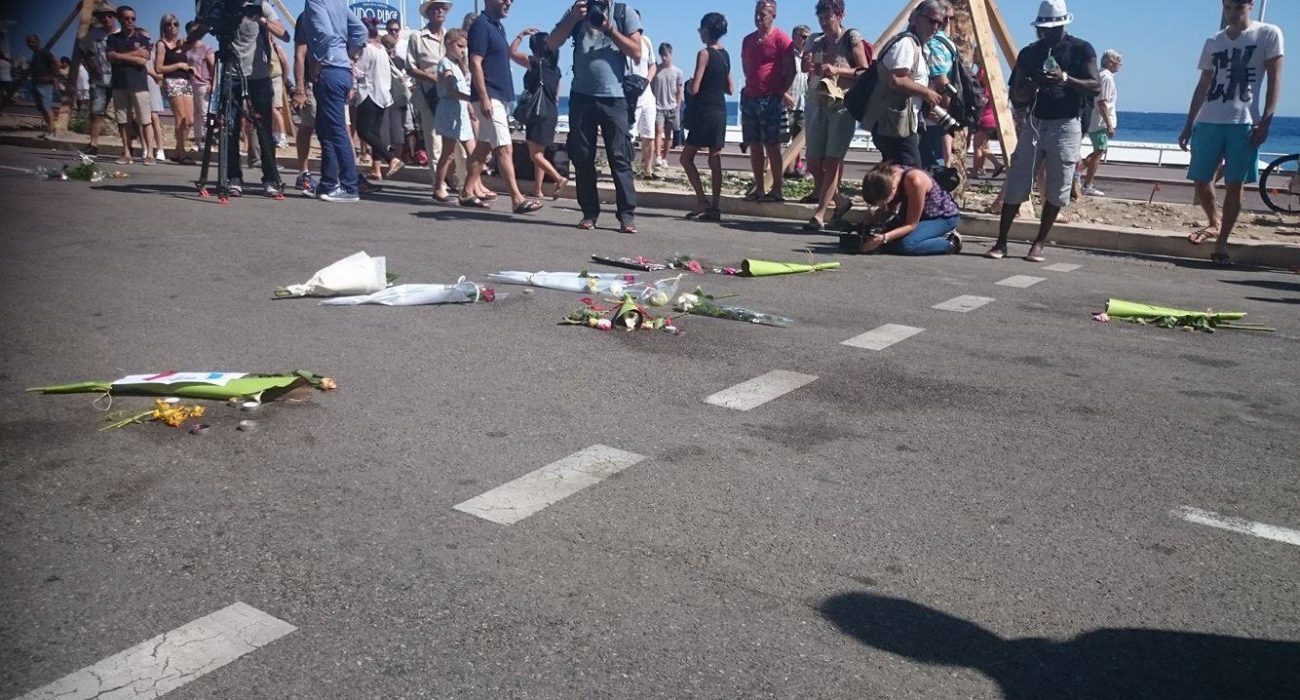 ‘Running for their lives’: A Manchester student on the horrors of the Nice attack

“This is the most relaxed place I’ve been to. It’s just so laid back. Nobody here has a care in the world.”

I was sitting at the Opéra beach on the Promenade des Anglais in Nice waiting for the Bastille Day fireworks display, talking to a Swedish friend, Jon, who I had met that week in the language school we were both attending.

“The climate, the sky, the colours… Everything here is perfect,” he told me. After six months of life as a Niçois, he had determined that this was the only place he could see himself settling down.

The major reason we both agreed that Nice was so pleasant was the people; the weather and culture combine to create a carefree atmosphere in which the vast majority seem naturally happy by default. Locals and tourists sit side-by-side on the beach during the day, and eat together in the same restaurants come the evening. The cynicism, individualism and self-absorption of life in Paris is completely alien here.

Some Spanish classmates who we were supposed to meet were still eating a late dinner, so we arranged to join them afterwards for the celebrations. Heading past the fountain at Place Massena, we passed four soldiers armed with heavy weaponry, the likes of whom are now commonplace across France after last year’s terrorist attacks in Paris and Saint-Denis.

“I’m still not quite used to bumping into people carrying machine guns,” I said.

“At least you know that if anything goes wrong, they’re there to stop it.”

“But it makes you more aware that something might go wrong.”

As it got towards 10pm, when the fireworks were due to begin, we headed up to the Promenade, which was now filled with thousands more people than when we arrived. The first flash of light pierced the pitch black sky and a golden glow fell over the Mediterranean. We stayed to watch and recorded videos to send to friends and family, and a cheer went up as the final illuminations burst into the night and drizzled down onto the sea.

Afterwards were made our way to a nearby bar for one last pint before bed. After thirty seconds or so a few people began to jog past from the direction of the Promenade. Then a few more. Then running. Then sprinting. Then screaming.

Some dove into the bar as quickly as they could and we followed. The bouncer tried to stop any more people entering as it became overcrowded, but he was pushed aside as people began to step over each other in complete desperation. I asked frantically, “What’s happening?” and the only response I got was a scream of “Someone’s there!”

We walked out on to Place Massena once more after deciding to head home, before a surge of hundreds, if not thousands, of people came bolting from behind us, like they were escaping an oncoming lion. Their eyes were wide and the screams were incomprehensible. The vast majority had no certain idea what was happening, yet knew they were running for their lives.

The urge to move as quickly as possible completely took control. My muscles went tense and all conscious thought left my brain as it concentrated on survival—simultaneously the most mortal, fearful, and alive I have ever felt. We dashed through side streets as restaurants pulled down their shutters and residents locked their doors. Once in the safety of our home, we sent messages to relatives and turned on the news to try to establish what exactly had caused such sheer panic.

At first the news was threadbare; rumours of a car crash and gunman dominated the initial drip-feed of information. As the hours ticked on the body count grew and the details became clearer—scores of people had been purposefully run over by a lorry. The total dead reached 60 and the television reporters announced the driver as a 31-year-old French Tunisian living in Nice.

President François Hollande began delivering what must be a nauseatingly familiar speech condemning the violence and pledging to reinforce military efforts in Iraq and Syria. How that is supposed to stop atrocities perpetrated by French nationals in France I’m not sure. The odious Front National leader Marine le Pen used the horror to further her fascist diatribe and call for a declaration of war on Islam. The #PrayForNice hashtags and tricolour filters were dusted off again.

Images and videos began to flood in of the dead lying on the Promenade. I learnt the French word for bowling pins as witnesses began to describe exactly what they had seen. Footage of similar incidents in recent years has desensitised us to incredible levels of gratuitous violence, but watching as people lay in pieces covered by sheets where we and so many others had stood happily in celebration hours beforehand strikes home the revolting reality that this is the real world, not a television show.

Now Nice is left to pick up the pieces. People still mill around and shops remain open, but nowhere near as many as usual. The weather has turned cold. The smiles have been replaced by an air of bewilderment. The colours have faded to grey.

The Promenade is lined for two kilometres with flowers, candles, and soft toys which cover receding pools of blood, slowly fading into the tarmac, each one the last remnants of a human. Was this a woman, a teenage boy, a baby? Where did they come from? What did they do with their lives? Were they happy?

The tranquil, amiable city we loved has been irreparably damaged in the most brutal and chaotic way. People left their houses with their loved ones to enjoy a celebration of freedom and equality and returned with their lives changed forever, or did not return at all.

The worst thing is the reality that whether in Nice, France, Europe, or beyond, it is only a matter of time until it happens again.