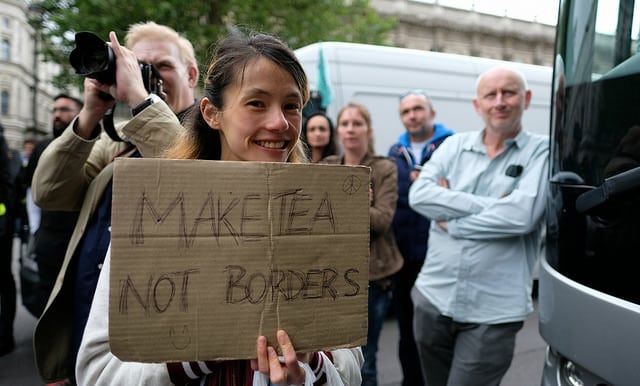 The Calais wall is no solution

An imposing fortification of grey concrete towers above, extending as far either side as the eye can see. From the top, triumphant nationalists wave their flags and cheer in celebration, hell-bent on making their country great again. Sounds familiar, right? But this isn’t the dystopian border envisaged by Trump supporters in America. It’s 2016, and you’re in the Jungle: welcome, ladies and gentlemen, to the great wall of Calais.

The UK government’s decision to spend £1.9 million on a wall protecting the road to the Channel Tunnel has been met with intense skepticism. This is unsurprising. After all, the logical solution to a wall that extends only so far is to go round it. This 1km-long goliath may be easier to conquer than Robert Goodwill, Minister for Immigration, would hope. The policy merely stands to benefit the human traffickers, who will raise the price for those desperate enough. We would be foolish to think that this will stop them trying.

What is our obsession with building big, solid things to try and keep the ‘Other’ out, anyway? The appeal, I would argue, lies in the physical security so often provided by barriers found in the natural world: The Himalayas between India and China; the Channel between Great Britain and the Continent; and the Pacific and Atlantic oceans flanking the United States. In contrast, the Low Countries and Poland in the 20th Century were turned into the equivalent of the imperial powers’ sandpit (except with artillery).

So we try to replicate this natural physical security with the artificial. I’m not knocking forts—forts are awesome. I would love a fort. But the nature of these types of walls is inherently different, and doomed to failure. The most famous example of this structure is the Great Wall of China: thousands of miles long and immensely fortified, it has stood watchful over China’s northern border since 206 BC. Not bad.

But during that time it’s been overrun, outflanked and penetrated countless times by anyone who had the slightest inclination to launch a serious invasion of China from the north. Take your pick from the Mongols, the Jurchens after them, or the several Japanese triumphs of the wall. Even the Chinese themselves got back through to quell rebellions in the heartland. And the list need not stop here: Chinese records are littered with endless reports of incursions by ‘barbarian’ hordes from the south. How? They went round or through, multiple times. The Great Wall of China didn’t work.

Arguably, Hadrian’s Wall and the Berlin Wall both worked for a time. But there are two common factors between all these historical examples: They didn’t last, and they no longer exist as a form of deterrence. Walls of this type, it seems, are made to be broken: Their existence merely consolidates our fear of what lies on the other side.

Some say that those critical of the policy may be overreacting. After all, it’s only 1km long and 4m high. But the government’s position is clear, and reveals a dangerous precedent: We have done the fences, now we are doing the wall. What happens when this wall fails and the Channel Tunnel remains vulnerable? Moreover, the root principle of the policy is worrying: Simplistic, knee-jerk, and reactionary. It fails to deal with the fundamentals of the refugee crisis currently gripping Europe.

Finally, it’s exactly the attitude that our country prides itself on avoiding. We’ve openly mocked Donald Trump’s demands for a wall on the USA’s southern border, and riled uncomfortably as fences went up in Eastern European countries. But despite all that, despite all the talk of British tolerance and our commitment to those in need, we have managed to come to the same disheartening solution: We, too, need to build a wall.

Walls rarely stop desperate people. Those that did had to resort to sentries, bullets, mines, and a senseless waste of human life. Still, at least it’ll have flowers to dampen the visual effect—that is, on our side of the wall.