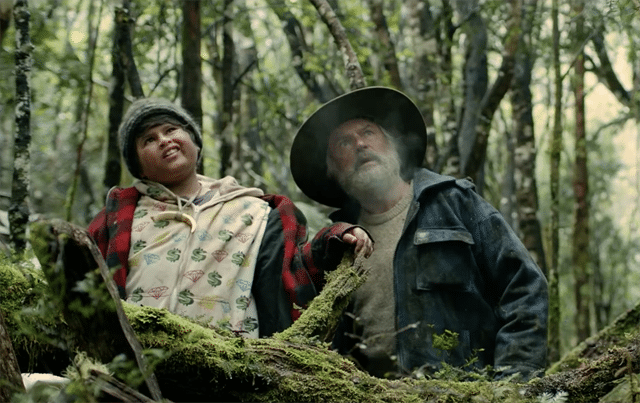 Review: Hunt for the Wilderpeople

New Zealand’s relationship with the natural world is well known around the world. Whether it is the luscious snow glazed tops, or breath-taking lakes of beauty, the iconography of the two islands is embedded into culture. Yet, something not necessarily associated towards the country is the genre comedy. Director, Taika Waititi, in recent years, has brought to the forefront of independent cinema a rise of indigenous Kiwi comedic talent- particularly orchestrated masterfully in horror mockumentary, What We Do in The Shadows. However, his latest film, Hunt for the Wilderpeople, draws towards a sentimental narrative, with comedy spread on top to pay homage to the works of fellow film-makers such as Shane Blacks’ buddy films.

Ricky (Julian Dennison) is your typical rebellious youth. Dressed like a kaleidoscopic gangster, he styles himself on rappers . Yet, behind the colourful aesthetic, Ricky is an orphan. Transported out to the New Zealand bush to live with his caring aunt (Rima Te Wiata) and her reclusive husband Hec (Sam Neil), Ricky finds a new home. Delivered by the highly macho social worker Paula (Rachel House), Ricky quickly realizes that his ‘gangster’ lifestyle will swiftly come to an end. As time passes, the boy becomes attached to his aunt and his new way of life. In this intimate relationship, Waititi’s script flourishes with graceful moments of comedy. Whether that be the overtly grotesque killing of a boar or his aunt’s electro birthday song for Ricky, the hilarity of these scenes add depth to all characters, especially our protagonist. After an unexpected tragedy that threatens to destroy Ricky’s new idyllic life, he runs away and attempts to fake his suicide in hilarious fashion, only to come across his Uncle in the wild bush. What ensues is a nationwide manhunt for the two after the law declares that Ricky must be returned to his orphanage.

With only the wild to live off, the two bond over time with paternal sentimentality at its core- of which becomes the foundations of the film. Instead of resorting to simple comedy through the dialogue of the film, Waititi additionally uses the editing of Tom Eagles, Yana Gorskava, Luke Haigh to benefit certain amusing storytelling. With self-references to Lord of the Rings and Terminator, the Kiwi director is not afraid to blend intertextuality into his world. With this comes the formerly discussed iconography of landscapes, as so associated with Middle-Earth. Nonetheless, cinematographer Lachlan Milne does not shy away from numerous drone shots of the magnificent landscape. The inclusion of these shots adds awe and gravitas to Ricky and Nec’s journey escaping the law.

Similar comparisons will be drawn towards classic buddy movies as Thelma and Louise due to their shared rebellious nature. Even so, the film thankfully avoids the seriousness of The Revenant’s brutal approach towards nature and survival. With his next two projects involving both Marvel and Pixar, Waititi’s rise will surely continue and Hunt for the Wilderpeople demonstrates a maturity in his film-making approach.