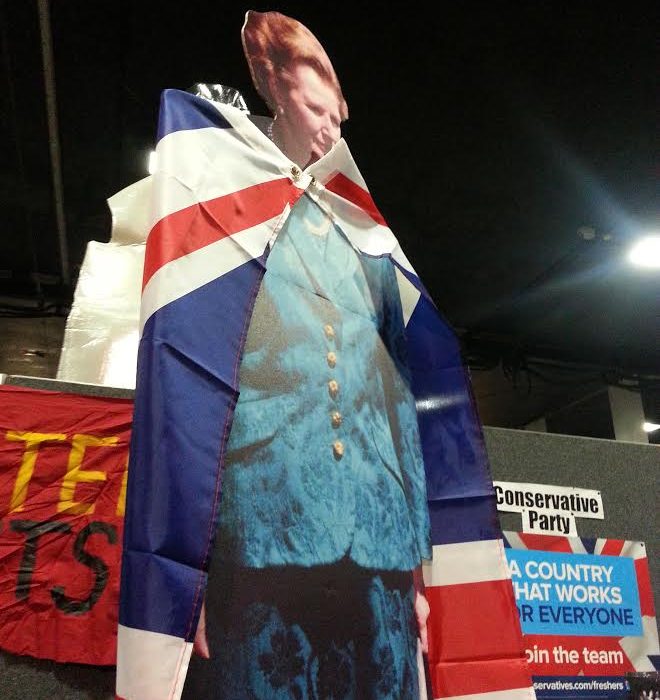 Last week, The Mancunion published an opinion piece by freedom of speech advocate Elrica Degirmen, where she attacked the student left’s “double standards” over freedom of speech. The article centred on a placard made by Freya, bearing the slogan, “the only cuts we need are Tories on the guillotine,” along with the cardboard Thatcher head that people may remember was stolen from the University of Manchester Tories during the Welcome Fair.

Firstly, we wish to correct an inaccuracy. Contrary to what the article claims, Freya is not an University of Manchester student—a fact made clear in a number of news articles following the incident. Therefore, no relation may be drawn between her and the SU’s safe space policy. So much for the ‘regressive’ left—at least we do our research.

Secondly, we wish to take issue with the statement, “I would wonder how people of her political views would react if those on the right called for those on the left to be executed. I presume that they would not be all too happy about it.” In case anyone does not remember, back in November 2011, then-Top Gear presenter, Jeremy Clarkson, called on national TV for 2.6 million striking public sector workers to be “executed in front of their families.”

When people on the left complained that joking about trade unionists being slaughtered on a scale that would rival Nazi Germany was rather bad taste, we were told it was a just a joke and to get over it.

The idea that it is only the left that makes statements like this is frankly ridiculous. Furthermore, there is a marked difference between someone with a national profile saying something on national TV and an 18-year-old taking a placard for a demonstration.

It is also frankly ridiculous for the right to claim that they are somehow the chief defenders of freedom of speech. It was the Tories who made the Prevent strategy—which, amongst other things, threatens the freedom of speech of thousands of Muslims in the British education system—a legal duty. It was Margaret Thatcher who told General Pinochet, a man guilty of mass execution of political opponents, that he had done excellent work in bringing democracy to Chile. That is just one example of the political and material support that Tory Prime Ministers have given to a whole variety of dictators and despots.

It is the right who frequently attempt to silence supporters of the Palestinians by smearing the entire Palestine movement as anti-Semitic. Only this week, the Home Affairs Select Committee published a report into anti-Semitism, which, despite finding that the far right are responsible for 75 per cent of Anti-Semitic incidents, devoted most of its content to attacking Labour leader Jeremy Corbyn and NUS President Malia Bouattia, despite both being principled anti-racists.

We would also like to address the argument that goes something like this: “Why are the left so intolerant of Tories when they’re supposedly so into diversity.” We are not entirely sure why those on the right do not understand that there is an important difference between someone attacking you based on issues of identity, such as gender, race, or sexuality, and attacking you for political opinions. A person’s identity  has absolutely no impact on anyone else’s life. Slashing welfare to the disabled, dismantling the NHS, and leaving refugees to drown in the Mediterranean does.

Now, to address the issue of the decapitation itself. We cannot help feeling that people are getting unnecessarily worked up over this. In reaction to the decapitation, a number of people commented online some absolutely ridiculous things. For example, some people—who have clearly never heard of the 1930s, the National Front, or Anders Brevik—decided that Lauren and Freya were “fascists”. But perhaps we reached peak absurdity after the news broke earlier this week that vandalism had been committed against two students running to be the BME officer, as well as other BME candidates. Online, someone wrote, “When Thatcher’s head is decapitated and property is destroyed at the Fresher’s Fair, there’s no outcry but when it’s Labour Students, the SU suddenly care.”

Is the beheading of a cardboard cut-out of the voted-“worst PM in the last 100 years” seriously being compared to racist abuse?

Lastly, on the point about destruction of private property. We understand that this did make a number of Tories rather upset. But when we compare it to the destruction of communities across North and South Wales, the dismantling of the Welfare State, and the whipping-up of toxic racism (that this week saw sections of the national press demanding child refugees have their teeth tested to prove their age) we have to say that we are not sorry.