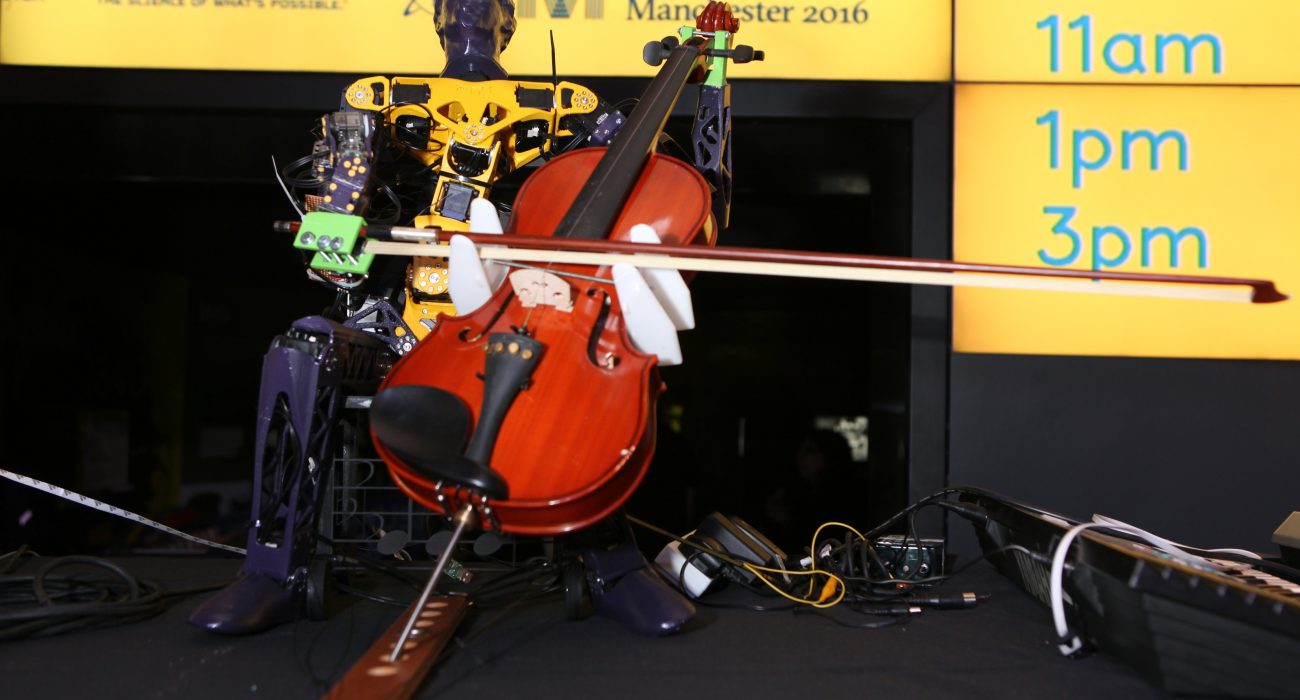 Alan Turing is well known as one of the pioneers of computer science and for his work in code-breaking during WW2. What most people do not know about is his contribution to electronic music. In 1951, while Deputy Director of the Computing Machine Laboratory at the Victoria University of Manchester, he managed to program some musical notes into an early computer. What better setting could there be for a performance by the Robot orchestra than in the city where it all started, Manchester?

The Robot orchestra is a citizen science project built by volunteers from schools and community groups across Greater Manchester. The robots were made from an incredible array of recycled materials and came in all shapes and sizes. There were arms beating drums and glockenspiels but also a cello with a moving bow and several violins played by rotating material hitting the strings. All in all, it was a creative and eclectic collective hooked up to a central computer through metres of wire.

Amongst the most impressive creations were ‘Robo Drummer’ by Scared Heart RC Primary School in Gorton, built from an old computer system unit, and ‘Breakfast Bot’, made from cereal bowls by New Islington Free School, who used the opportunity to teach children about the importance of breakfast as well as learning about technology and engineering.

The Mancunion was lucky enough to speak to Professor Danielle George MBE, lecturer of Radio Frequency Engineering at the University of Manchester and the brainchild of the Robot orchestra.

Speaking of the inspiration behind the project she says that it was because she wanted to “take people out of their comfort zones” by involving the arts. Using music exclusively “really captures the imagination of everybody” and “it doesn’t matter what your background is, or your passion is, or your subject, and what your age is either”.

The orchestra was led by a computer named Graphene as we were assured “he was a good conductor!” They opened with a classical piece alongside Gavin Osbourn, a solo flautist. Electronic music producers and performers Caro C + Uno Prism performed ‘Robotopia’. We were also treated to an electronic cover of Pharrell’s song ‘Happy’ made by sampling the orchestra and backed up by a sizeable xylophone. Manchester-based Lay Full Stop performed her unique style of urban soul with background beats from the Robot orchestra and the whole event was rounded off with groove-fusion, hip-hop band Family Ranks.

This year marks the 10th anniversary for the Science Festival and coincides with Manchester being awarded the title of European City of Science 2016. A fitting year then for the citizens of Manchester to show off their skills and build a recycled Robot Orchestra. The crowd was made up in part of the adults and children who participated in the project. They looked happy and satisfied to see the fruits of their labours in action.

However, it is far from the end of the Robot orchestra after this event. Prof George went on to explain about “an explosion of requests”, from various media outlets and science festivals across the country, about future performances and possibilities.