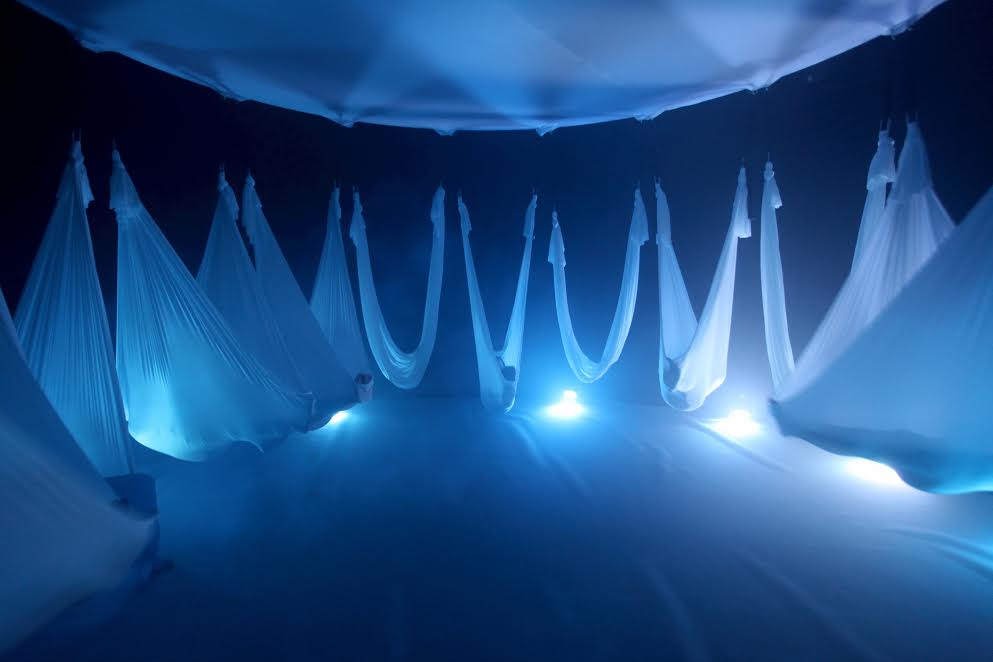 In the middle of the Arndale Centre, amongst the hustle and bustle of busy city life, sat the Chronarium. Designed by Loop.pH, it was one of the highlights of the Manchester Science Festival and explored our relationship between relaxation and modern life. From the outside it looked like a large black circus tent, beckoning passers-by to come and investigate. Its location was no coincidence as Antonio Benitez, director of the Manchester Science Festival, explained: “We feel very strongly that science is not just part of what the University does, not just part of what the Science Festival does; there is science in everything that we do, every day.”

He believes that it’s important to take the festival to unexpected venues and reach members of the public who may not feel comfortable visiting the museum or feel as if the festival isn’t for them. Engaging with the public in this way is “a good opportunity to really build that curiosity in science” and gives people a chance to find out more about it.

Antonio has been working for the Museum of Science and Industry (MSI) for the past ten years, and whilst having previously been involved in the Science Festival, this is his first year as Director. One of the main goals of the festival is to make science both physically and intellectually accessible. Something as fundamental as sleep is, as Antonio says, “relevant to every human being.” Taking an installation like this into a public place will undoubtedly draw people in — not least because of the booming bass reverberating around the Arndale.

Before entering the Chronarium, you have to take off your shoes. You step into a white floored circular space with hammocks hanging from a large silver ring. It looks like the set of a sci-fi film and a gravelly voice directs you to choose a hammock and instructs you on how to get in. As soon as you lie back you lose sight of the other participants and the experience becomes more introspective.

For around 20 minutes you experience an interesting blend of instrumental music and projected colours. The music is an Enoesque soundscape, slowly changing between deep bass sounds and higher pitched synthesised notes with occasional birdsong. As you gently rock in the hammock enjoying the wash of pinks and purples, the outside world fades into the background and even the noise of the Arndale Centre recedes to a dull background hum. The same voice brings you back out of the experience, then, blinking and hopefully a little more relaxed, you leave the bubble and head out into the shopping centre once more.

Art and science working hand-in-hand is the prevailing attitude of the Science Festival. At the Chronarium launch, two Ph.D. students from the University of Manchester were there to provide some insights into current sleep-based research.

Jack Barton is studying the potential link between sleep loss and mental health, relating to things such as schizophrenia, depression and bipolar disorder. He says that research in this area is still in the early stages and the main question is: “What is it about poor sleep that potentially puts us at risk?”

This isn’t just related to how we get to sleep and how we wake up but also the quantity and quality of that time. We may have the best alarm clock in the world but if it wakes us up after five-six hours sleep and we need eight, then we are not getting enough. Perhaps more surprising than this is the fact that even when we are getting the right amount of sleep, if we fail to go to bed at our normal times the quality of that sleep is also diminished. We all have a natural rhythm to our sleeping patterns and when that is broken we feel less rested, although over a longer period of time we may eventually adjust to a new pattern.

Alasdair Henry is studying the potential link between psoriasis (a chronic skin condition) and disrupted sleep, specifically what kind of factors might predict poor sleep as a result of psoriasis. These are things such as the fact that the condition can be very itchy and painful, which could cause people to wake up more frequently than normal. Alistair said in the modern 24-hour society “we often don’t take the time to think about the importance of sleep, we’ll sacrifice it to go to work commitments or social commitments.” An awareness of the importance of sleep is particularly highlighted by the effects of failing to sleep well.

Rachael Wingfield, one of the artists from Loop.pH, says that the Chronarium “isn’t a design solution … it’s about the dialogue, asking people: why do you sleep? what are your attitudes to napping? how much do you sleep? and also just asking questions about the future of the city.” So whilst we shouldn’t expect Chronariums to be popping up all over the country, it might help open up the debate about sleep. Loop.pH previously ran this installation in Singapore and the attitude to napping is, if you’ll excuse the pun, much more laid-back over there. “They’re really used to this idea of napping to optimise their work output … It’s really different here, people are quite ashamed to say they nap or they’ve been sleeping a lot.”

Having met some researchers during the project, Rachael added: “I would love to be able dig a bit deeper with the work and actually start to conduct some proper experiments to see the benefits of these different sort of environmental controls on the body.” So there may be some long-term installations on the horizon.