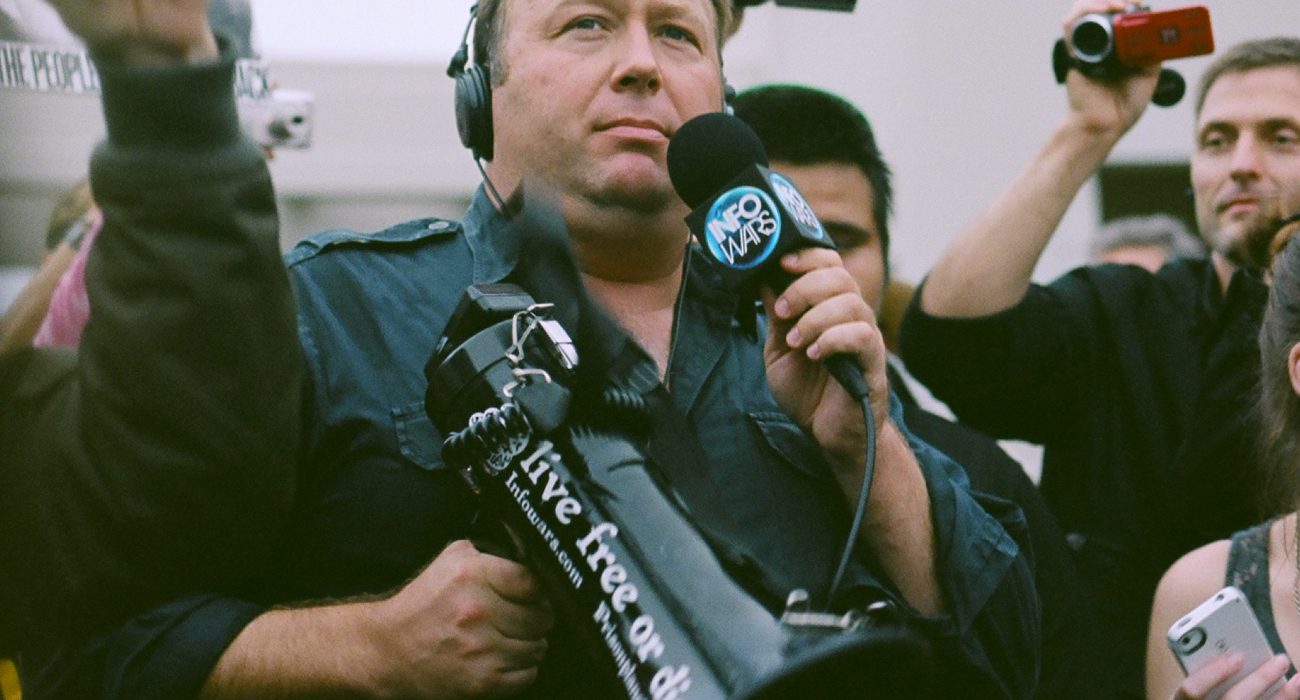 The recent US election saw the conspiracy theorists come out to play. Two online purveyors of such theories were Infowars and Breitbart News. The latter enlightened us with revelations with articles such as ‘Racist, Pro-Nazi Roots of Planned Parenthood Revealed’, while the post-truth hub that is Infowars is now ‘suggested’ by Google before the word ‘information’.

Infowars‘ main man, Alex Jones, played the role of “Barking Object No. 1” in the Donald Trump nativity play. He would have offered Trump some frankincense were it not for his belief that Obama added mind control chemicals to it. That last statement is pure fantasy, Infowars has merely said that food, water and air contain mind-controlling chemicals.

You may remember when Alex Jones shouted about the second amendment so obnoxiously on CNN that Piers Morgan metamorphosed into a decent person. In the presidential election, the Infowars leader was concerned that Hillary Clinton had connections with an artist called Marina Abramavić who uses blood and gruesome imagery in some of her pieces. This, Jones suggested, meant that Hillary Clinton performed satanic rituals and could speak to the dead. He then concluded that these were actually paedophilic satanic rituals, citing images of Marina Abramavić’s art instillations as evidence.

Many are allured by this wondrous combination of complexity and simplicity. The ease of simply saying ‘NO!’ to mainstream media provides a welcome break from actually having to analyse current affairs — it is time-saving and feels revolutionary. The subsequent complexity of the theories may initially mystify, but soon acts to heighten the intrigue. Before bewilderment starts to push the audience back over to the mainstream narrative, they are reminded that instead of getting bogged down in details all they need to do is say ‘NO!’ and the United States is one step closer to being saved.

Conspiracy theories have been a prominent feature of modern political discourse, especially thanks to the birth and growth of the internet. The magnitude of the event often determines the amount of theories which run counter to the central explanatory narrative. In the case of 9/11, the surreal horror reached such extraordinary levels that it came into intense conflict with people’s minds. “It was an inside job”, naturally. But also, “did you hear that no planes were used? And don’t forget that those shape-shifting reptilian overlords had a scaly hand-claw or two in the disaster”.

The moon landing, going back further, similarly reached beyond conceivable norms in its beauty. Just as terrorist attacks have the unreality of a hideous nightmare, so too did the moon landing have a dreamlike quality. The two towers fell to the ground, one after the other; two human feet dropped down the surface of the moon, one after the other. These seemingly unreal occasions demanded the questioning of the conspiracy theorists.

This argument pays respects to Adam Curtis, whose melodramatic collage poetry shows us that it is not only the alt-right who equates volume of Wikipedia tabs to validity of argument. Perhaps my research into conspiracy theorists has itself taken on the qualities of a conspiracy theory. Perhaps — to be read in Adam Curtis’ voice — that is precisely the point.

Some needed the extravagance of the moon landing to question reality. For David Icke, on the other hand, the moon itself is too far-fetched. So, keen not to be fooled by the government or the moon, he locked himself in his study with an empty pin board. Within a month it was covered with odd scraps of paper, maps, pictures of Egyptian pyramids, and mirrors reflecting his face. These were all connected with a piece of string which signified logic. He emerged with the answer: the moon is a spacecraft.

Like ineffectual game-show hosts, these people do not accept the first answer they are given, or the second, or the third. When we walk down the street, we only perceive the surface level appearance. Those, however, with such a divinely-appointed visionary gaze, just like William Blake, look at what we think of as reality — a person driving by in a car or a collection of ants carrying a tiny bit of leaf — and their mind is at once awash with images, quotes, numbers, statistic-based graphics, and everything starts making sense.

In a neat summary of his research process, Alex Jones recently declared: “I’ve known for a long time from sources what the Clintons are into and basically, if you can imagine it, they’re into it.” But to read his words is not to experience the full force of his sentiments, which only come alive when you listen to his tortured voice. It is loud, angry, carnivalesque. He screams, he cries, he snorts. It all seems so hideous and nightmarish, almost to the point of unreality. In many ways, Alex Jones is precisely the embodiment of every kind of event that a good conspiracy theorist must not accept at face value.

And indeed as Trump thanked him for his help in the election victory, it appears Alex Jones is becoming the insider. Meanwhile executive chairman of Breitbart News Steve Bannon is now Trump’s chief strategist. These are no longer outsider conspiracy theorists. If we are not careful, this will be mainstream media.