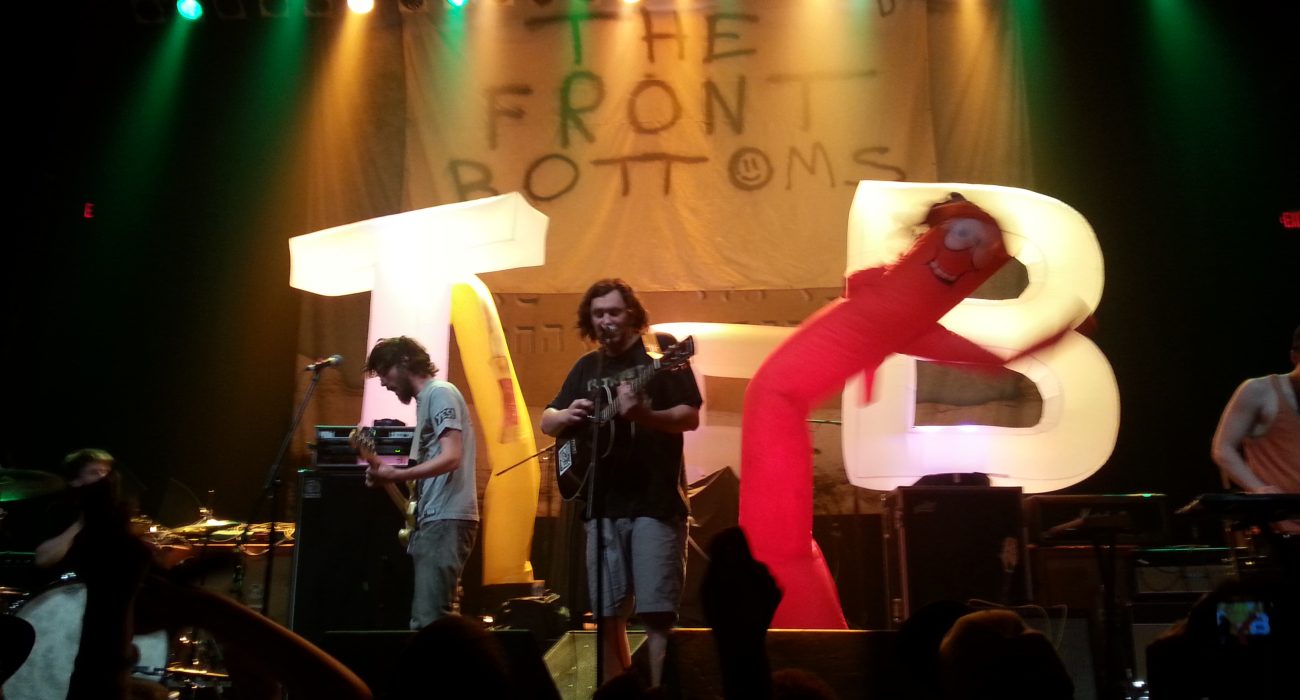 I missed the Front Bottoms at Academy 2 in February, something I have been sore about since: no matter though, because only a few months later the folk-punk four-piece have returned to Manchester, this time headlining the larger Ritz. From the outset, it is easy to see why they came back: it is not often you see that romanticised rock & roll image of arms in the air and strangers hugging, and it is even rarer to see such a scene a matter of seconds into the show.

The band opens with the punchy ‘Skeleton’ from 2013’s Talon of the Hawk. One of their catchier, more memorable songs, it is a fine choice, and captures the band’s ‘getting-stoned-and-crying-on-a-skateboard’ appeal. They continue by playing a lot of songs really fast, bolstering their teen angst credentials with lyrics like “I’m scared I’m gonna die as lonely as I feel” and “would you kick me in the face please, it’ll make whatever I say sound like poetry”. These relatably juvenile sentiments are reflected in the domestic scene on stage, decorated with lamps, sofas and a small television, bringing to mind a small-town small world where every emotional hurdle feels like the end of the world.

It is potent stuff, and despite the propensity of the Ritz to overwhelm bands of The Front Bottoms’ stature, Brian Sella and co. do it justice: the songs are bold, loud and clear, and the venue is packed with devout fans shaking the floor while howling every line back at the band. The Front Bottoms have clearly built a strong rapport with fans through extensive touring: Sella is confident joking around, responding sharply to the surprise appearance of a toilet roll tossed onto the stage (“if you hit me in the head, we’ll play ten more songs”).

It is just a shame that, despite their endearing presence, the Front Bottoms are let down by their choice of songs. Much of the set is pulled from last year’s disappointing Back On Top, which completed a move away from needly acoustic guitars and horns for a heavier, generic pop-punk sound. The songs sound better live than on record, but there’s little of the eclecticism which made cuts like ‘Maps’ and ‘Swimming Pool’ so charming. Save for the all-too-rare plinking of cheap keyboards or blaring trumpets signifying older cuts, the new material is dominated by straightforward drumming and swaggering riffs. It is also a shame the bubble machines and inflatable mascots associated with the band’s live show are absent.

This may be unfair: my dissatisfaction with the material clearly placed me in the minority, and it is hard to argue with the crowd’s rapturous response. It is testament to the band’s performing chops that they created an exciting performance and enjoyable atmosphere even from what I would consider to be a fairly uninspired setlist. Fair play to them – it is just an odd feeling to see a crowd lose it for songs I would receive as nothing more than a fine opportunity for a loo break.