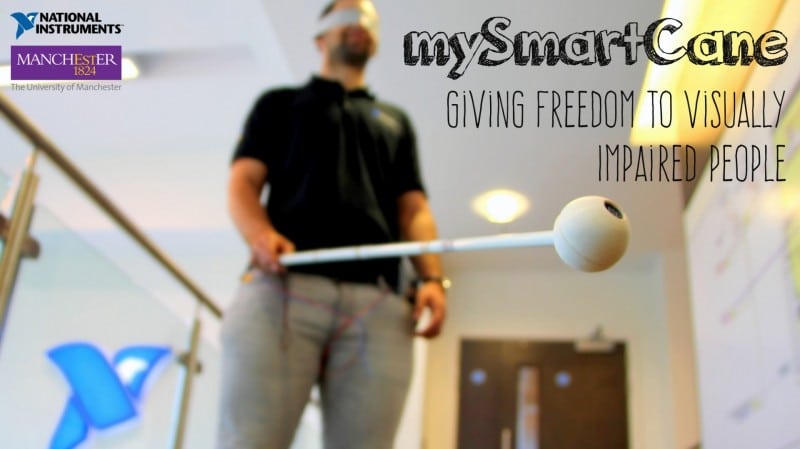 Vasileios Tsormpatzoudis, a PhD student and the University of Manchester’s School of Electrical and Electronic Engineering, has upgraded the traditional white cane used by the blind and visually impaired by adding a sensor.

He explains, “mySmartCane allows visual impaired people to sense their environment beyond the physical length of their cane.

“The user is alerted to approaching objects using gentle audio, rather than waiting for the cane to physically bump into the object. Navigation is therefore easier and much faster.”

Mr Tsormpatzoudis explained that this project felt very personal to him. He said: “My main inspiration was my mother, who has retinis pigmentosa. I have seen first-hand the struggle visual impaired people have to put up with when they try to navigate with the traditional white cane.

“In preparation for the project, I conducted many conversations with existing white cane users. The key takeaway was that my modernised white-cane had to be as simple and low-cost, so I used 3D printing and cheap sensors to create an ultrasonic sensory ball, which attaches to the bottom of most existing white-canes.”

The sensor used is an ultrasonic ball that can measure the distance of the cane from surrounding objects. It then converts the data into a sound that can be heard with a bone-conducting headphone.

This means the user can gauge the object distance by the frequency of the sound without becoming too distracted by the environment and reliant on support from others.

Talking of the future, Mr Tsormpatzoudis said: “I do have many ideas to refine the design further. For example, I want to add an additional sensor to detect overhead obstacles such as sign-posts or doorways which could cause injury and are impossible to detect with a normal white-cane. Another innovation could be using vibration rather sound.”

Mr Tsormpatzoudis’ project supervisor at National Instruments, where the design was made, Richard Roberts has said: “It’s also a testament to practical engineering skills taught at The University of Manchester, the power of National Instruments technologies and, of course, Vasileios’ unbounded creativity. I think this highlights that Manchester is a hotbed of engineering talent.”