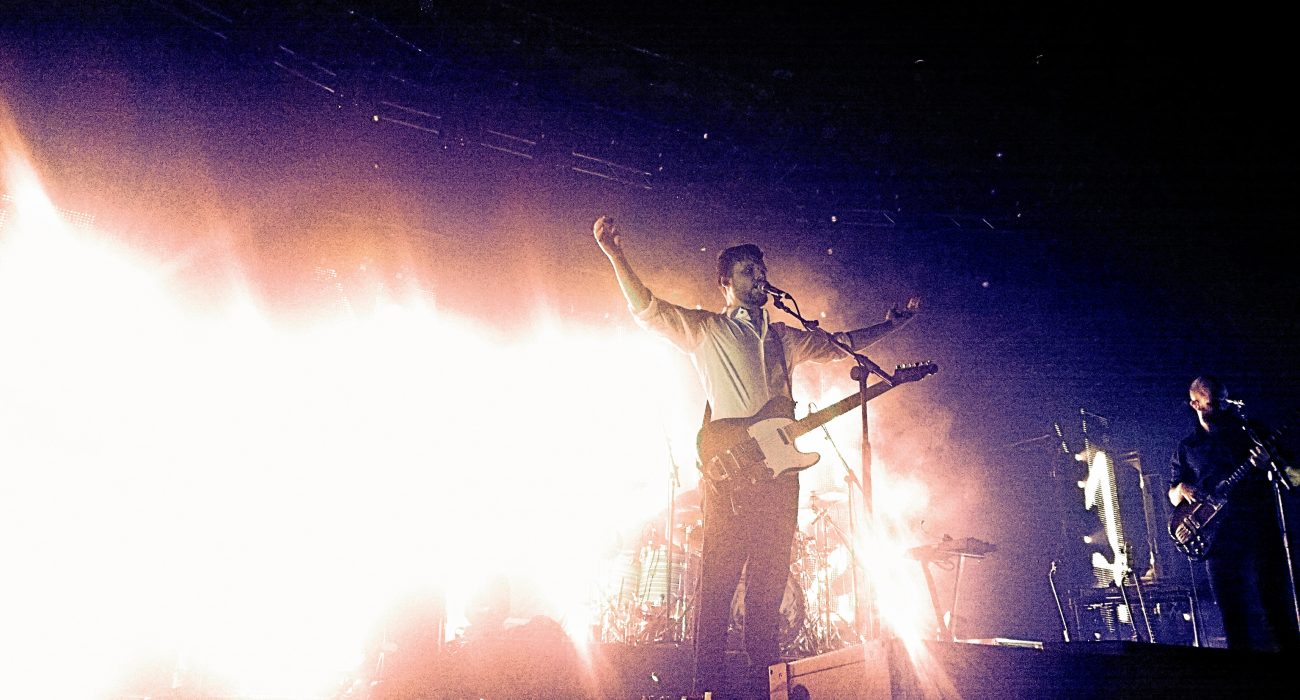 25th November at The Albert Hall

By the time White Lies take to the stage, The Albert Hall is bursting at the seams with 2500 hungry fans packed into a sold-out show. Launching into ‘Take It Out On Me’, lead single from latest album Friends, they waste no time blowing more than just the proverbial ‘bloody doors’ off of the venue. Sounding huge and with a light show bombastic enough to set off a seizure in someone a kilometer away, the atmosphere is like that of a scaled down arena show.

A few songs in, you can count the number of people still sitting on both hands. The stained-glass windows and organ behind the stage make a suitable setting for what certainly feels like a mass religious experience. Minus the speaking in tongues, White Lies have a faith healer-like ability to whip up an audience, with tracks from 2009 debut To Lose My Life… noticeably receiving the best reactions. The building positively erupts for fan favourites such as ‘To Lose My Life’ and ‘Death’; the reaction to the latter likely to make any building inspector shudder at the thought of it taking place in what is, a grade II listed building.

As the show progresses though, there is a sense that White Lies have played all their cards. Anthem after anthem with variable reactions from the audience starts to dull the experience. As massive as they sound, without enough contrast, parts of the set fade into one another. There is an obvious appeal to playing the songs with the most energy, but without the change of pace, without quieter moments, the highs just don’t consistently feel so high. There is a lack of danger, for the most part you know what is coming and it is the moments when they deviate from this rigid formula that really shine through. ‘The Price Of Love’ is a welcome change of pace and sees front-man Harry McVeigh actually come across as dark and subdued. It may not be the biggest singalong of the set but it is one of the most captivating points and it elevates the impact of what follows it.

While it is impressive how big just four musicians can sound, with the exception of drummer Jack Lawrence-Brown, they rarely seem to get as lost in the performance as their audience. With a talent for writing such mammoth tunes as they do and provoking such a reaction out of an audience, it is a shame to see some of their contemporaries graduating to playing arenas without them. In another world, one which they aren’t let down by such a one-dimensional back catalogue and aren’t as afraid to take risks, it would be easy to see them playing to twenty thousand people rather than two and a half. Overall an hour and a half spent with White Lies is undoubtedly an enjoyable experience, but one can’t help thinking of the gig it could have been.