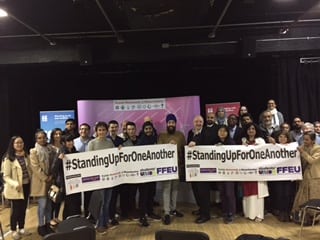 The University of Manchester Students’ Union held an inter-faith event at the Students’ Union on Wednesday 7th of December, bringing together people of all faiths for an evening of discussions to celebrate diversity across Manchester.

Representatives from the Students’ Union as well as inter-faith advocates from across Greater Manchester, including those from Faith Network 4 Manchester (FN4M), came together and discussed integration and harmony between different faith communities.

“The event is part of community week here at the University” said Saffa Mir, the Students’ Union Community Officer and organiser of the event: “It’s in collaboration with the Faith Network 4 Manchester and aims to celebrate the diversity of Manchester.”

Saffa later delivered a speech to guests, which encompassed representatives and students from the seven different religious societies at the University of Manchester Students’ Union.

“We want to really link up with the students. We are living through very very difficult times – there’s a lot of hatred.”

“One of the biggest things on my agenda upon being elected Students’ Union Community Officer was to set up an inter-faith committee — we need that representation.”

Guests listened respectfully as different representatives approached the stage to speak about their involvement with the inter-faith initiative.

“Religious intolerance is a growing problem in the world” said Carl Thomas, Christian and student at the University of Manchester. “I think it’s a great privilege that we can all meet. I found some statistics that 322 Christians are beaten and killed a month globally — just for their beliefs. 214 properties destroyed and 772 accounts of rape, beating and forced marriage.”

Carl also added to his address “I hope that this is a thought-provoking evening where we can all learn something from each other”. Carl commented on the event “it’s a really nice atmosphere and everyone’s really friendly”.

Patrick Johnson, Head of Diversity for Greater Manchester, said: “It’s a real privilege for us at the University of Manchester to have such a wonderful secular institution. I think an event like this is really important.”

Sima, a Muslim and student at the University of Manchester said: “We’re all humans. One species. Things that make us different is our variations, the way we look. When I first came to university, people asked me ‘are you enjoying uni?’ and I told them I loved the diversity”.

Representatives from the Sikh Society, Simerdeep and Chandini, also delivered a speech: “Students come to Manchester, leaving their families behind and they rely on us. Students approach me and it’s really important that we take them seriously.” They embraced the inter-faith community and mentioned their involvement with the Hindu society “[Hindu Society]… came to our event and in turn we went to theirs”.

Asha Buch, Co-chair of FN4M, was next to deliver an address to attendees at the event, beginning with a witty reference to the University’s involvement with the inter-faith community within Manchester: “I’m a student of life-long learning. I can’t stop learning”.

“I visited Bosnia in January on the 21st anniversary of the genocide. 45 percent of inter-faith marriages are between Muslims and Christians and yet the genocide happened. What’s happening?” Asha paused, creating a dramatic effect. “We need to reach out. I believe in this intergration. I believe in this harmony.”

Jonny Wineberg, Co-chair of We Stand Together, addressed Greater Manchester Police’s initiative to encourage inter-faith integration in Manchester and discussed the ABCDE headings which summarise the initiative.

“A for advocacy — Advocating what you believe in but also for those people who can’t. B for Building bridges. C for Challenge — when you see people being inappropriate, speak out. D for Doing — getting people together. What can YOU do to make things better? And E for Education — Educating others but also educating ourselves”

For more information and to get involved, visit FN4M’s website and it is promised that there will be more inter-faith events organised by the University of Manchester Students’ Union in the future.