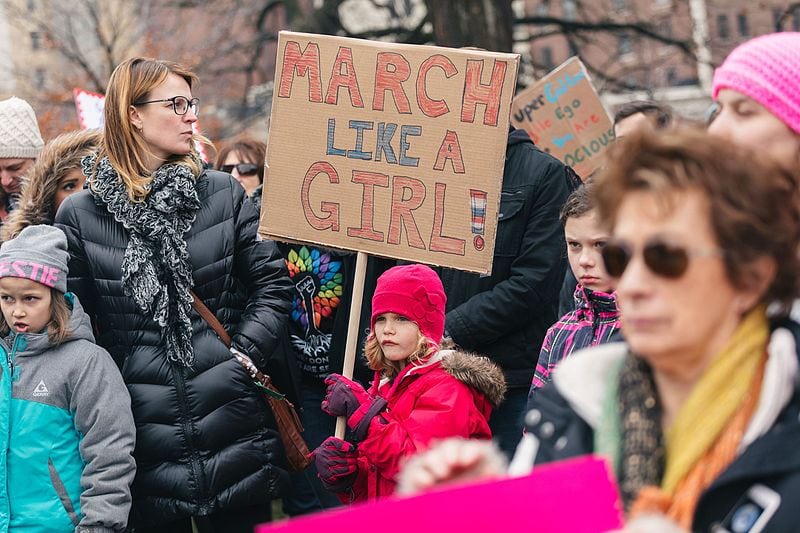 Women’s marches: a cathartic movement with the wrong targets

Supposedly, the women’s marches aimed to have women “join in diversity” whilst at the same time relay “a bold message to our new government on their first day in office, and to the world that women’s rights are human rights.” What this has to do with extremely privileged women from across the pond screaming “not my President” is something that I found confusing. No doubt this confusion is sourced from my own white and male privilege that I obtained on the 22nd of June, 1995.

Nevertheless, these marches faced further justification because “the rhetoric of the past election cycle has insulted, demonised and threatened” women. This, ceterus paribus, is genial. This spirit was further exemplified by the exclusion of “New Wave Feminists”, a pro-life women’s group, as a sponsor of the march.

It is a little known fact that early feminism, to which the modern disease owes its existence, was based around such pro-life views towards abortion. Founded by Mary Wollstonecraft in 1792, there is an organisation, based around this specific issue, called “Feminists for Life”. It has campaigned for the rights of unborn children for over 200 years. Wollstonecraft did not condone those who “either destroy the embryo in the womb or cast it off when born” and further went on to say that “nature in everything deserves respect, and those who violate her laws seldom violate them with impunity.” It would be dishonourable not to mention that Mary Wollstonecraft died from complications following the birth of her second baby girl, who was subsequently named Mary in respect to her mother. Younger Mary would later become a great writer, producing one of the greatest novels to ever address to issue of violating nature: Frankenstein.

Nevertheless, this made it clear that the notion of diversity, to these women, does indeed have limits — dependent on the diversity of your opinion. This inclusion, to a certain degree, is something that has been beautifully campaigned for by leftists and is a direct reason for the rise of the diversity they despise. Ironically, the website for the movement calls “on all defenders of human rights to join” them, whilst ignoring and denying human rights to unborn children. Although babies can be born as early as 22 weeks, this is a philosophical distinction that will never be devoid of diversity.

Despite this educated effort to celebrate diversity, this whole series of marches reeks of a simple notion of privilege defined under the notion of “not in my back yard”. Here, we have a group of well-organised and privileged women speaking about alleged sexual assault. Where were these women when Bill Clinton was settling rape cases against himself?

This is a state of biographical identity politics. On one side, we have those who we can actually define as victims of economic uncertainty, job insecurity and widespread mockery of their opinions by snobby leftists who do not seek and wish to define themselves as victims. On the other side, we have those who are, only, victims of their own perceptions — who in fact exist in stable employment with far too little free time to gallivant around Twitter.

These marches demonstrate that those with unconvincing victimhood complexes are enraged by the choice made by millions of men (and women) who have genuinely been victimised by an Obama administration. The former administration killed more American citizens, bombed more countries, suppressed free speech and persecuted more whistleblowers than any of its kind. These co-exist with the fact that the Obama administration enriched the top five per cent more than under George W Bush.

Where were the Women’s marches when one of Obama’s military strikes in Yemen killed scores of women (and their children)? We have justified anger at Trump imposing a visa ban on Yemen, but where was the anger at Obama’s killing of Yemenis and the support of a Saudi war that formed vast pockets of poverty and famine in the former? We have justified anger with Trump for starting temporary bans on Syrian refugees coming into America, but where was this when Obama instigated policies that ripped Syria apart and saturated it with weaponry, doing little to help refugees? There is further justified anger with Trump for his beginning of the wall building process, but there is systemic radio silence on the fact that Obama kicked out more Mexicans than any president in history and the fact that Hillary voted for the building of a 700 mile security barrier between America and Mexico (essentially, a wall).

This hypocrisy and stupidity is why, despite being equally sceptical of Trump, I sympathise with the “white trash” women that voted for him rather than the “diverse” and genial women that voted for a woman who made extensive efforts to suppress the victims of Bill Clinton’s sexual escapades.

I wonder if Iraqi Yazidi girls look at these western women and sympathise with their oppression while they are being sold as sex slaves by the Islamic state.