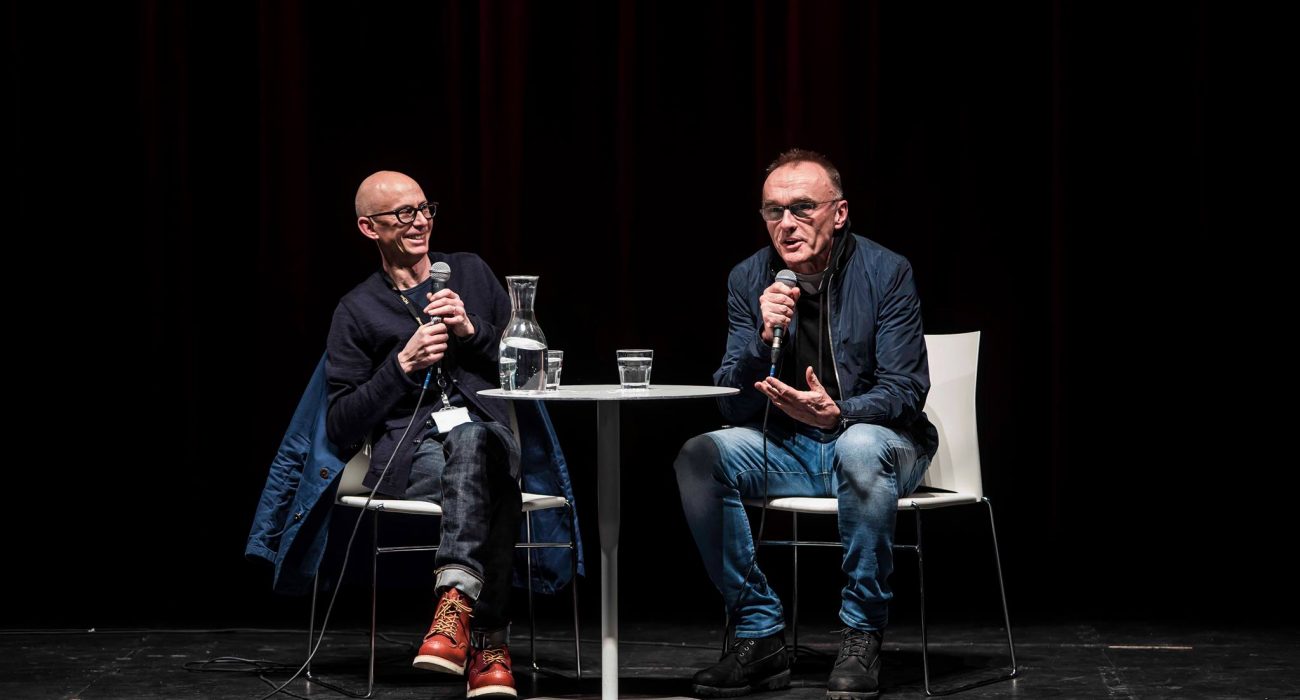 Looking at any advertisement board, it is almost impossible to miss a T2 Trainspotting poster. Like the posters, the film’s director Danny Boyle has continually promoted his new work across the likes of The Graham Norton Show and Kermode and Mayo’s Film Review Show. The former provides great viewing as it showcases Boyle’s ability to go toe-to-toe with Norton himself, one the best chat show hosts on the market. Inevitably, as a patron of HOME,  Boyle required a more intimate discussion with Manchester.

Arriving at 6:30pm, I sat quietly on the second floor equipped with a lethal combination: a pint and a book. At the same time, Danny Boyle and HOME’s Artistic Director Jason Wood conducted a live Q&A via Facebook in Cinema 1 to soften the blow to all those who were unable to purchase a ticket for this premier event. Selling like hot barm-cakes on a Saturday morning, tickets sold out in early January. For those fortunate enough to have a golden ticket, HOME had prepared three screenings of T2 in Cinema 1, 2, and 3- with Boyle’s post-film discussion taking place in Theatre 1.

Taking my place in Cinema 3 at roughly 7:35pm, the film promptly started. Startled at this swiftness, its opening music distorted my surroundings. Thankfully, the projectionist had been a wee bit trigger happy and prematurely pressed the start button. As the lights signalled my return to normality, I returned to my state of anticipation…

Walking out of the cinema overjoyed at the film ‘’not being shite’’, as Boyle later suggested, I rushed to the toilets. My consumption of that beer had been a novice error and for half the screening I had contemplated relieving my bladder of its discomfort. The sobriety and poignancy of T2 pinned me to my seat. Fortunately, HOME’s toilets were up to HSE’s standards, unlike those that Renton encounters in Trainspotting. I had not missed the start of the Q&A and to my relief I was greeted with Blondie’s ‘Atomic’ on Theatre 1’s sound system. As the music cut out, it was time for the pièce de résistance of the evening.

Walking out onto the stage’s spotlight, Boyle looked delighted at audience’s thunderous applause. As Jason Wood calmly took his seat an early announcement was made: ‘’Any jokes or questions that you see that were on the Graham Norton Show are purely incidental’’. After this, Wood asked the big question on everyone’s lips, ‘’How much trepidation was there on your part?’’. Describing that a script had previously been created by John Hodge — the man who adapted Irvine Welsh’s Porno which is set ten years after Trainspotting — Boyle suggested that the script fell through due to the original ”passing into the consciousness of people” and wanting to do the characters justice. It was not until 18 months ago at a workshop in Edinburgh that Hodge ended up writing “something much more personal”. It was after the completion of this script that Boyle sent the work out to McGregor et al. “I knew it was about something and when it is about something it’s everything’’. Logically, the script takes place 20 years after the events of the first film “so when Renton stands there and says I’m 46 and fucked that’s John who’s 54 and fucked. That’s where it came out from’’. The “logistics of getting all these people together’’ was moderately simple, as a result of Hodge’s powerful script and the original’s “power in attracting them back’’. Due to Jonny Lee Miller’s contractual obligations on Elementary and Robert Carlyle’s commitments to Once Upon a Time, the crew were only able to shoot in the Scottish summer months. “It was fine because it is about something — the script — you just know you are gonna do it’’ Boyle declared.

Naturally, Boyle expected his cast to ‘‘tip-toe back into it’’. To his surprise, Miller and Carlyle were ‘‘blazing straight away’. ‘‘I knew then, and the crew knew, that we needed to raise our game as they are now much more experienced actors than they were the first time’’. The 60-year-old constantly referenced the ‘’blazing attitude’’ of his actors and the whole team. This attitude can be felt from the first scene to the last and clearly benefits the actors emotive performances.

Interweaving the past into the present, the film’s editing was essential in creating T2’s poignant melancholy. To him ‘‘the really creative bit in this was the editing’’. Editor Jon Harris and Boyle treated the original like ‘‘an artefact’’ and wanted to open a direct conversation between the two films. ‘‘It was really fascinating as I had never done anything like that before’’. Alongside the iconic shots of the previous film, the music of the past also helps to echo and distort the present. Underworld’s ‘Born Slippy’ and ‘Iggy Pop’s Lust for Life (The Prodigy Remix)’ rarely get going at full throttle, yet, when they do, they intensify Anthony Dod Mantle’s cinematography. A clever technique from a visionary director and his crew, these sounds suggest that the past can never truly be experienced again by Renton, Spud and all the rest. Similarly, in scenes such as the one featuring Renton’s mother’s shadow the ghosts of the past are felt more literally. Boyle alluded towards the imprint of the past upon the present and its Proustian loops. “[Renton] has to live with that and try and find some atonement’’. ‘‘It does look at change in a very physical sense’’, Wood later observed, and these fragmented songs and shadowy visuals represent humanities’ worrisome mortality.

Revisiting the locations of Trainspotting ‘‘was a smart way of referencing’’ in Wood’s eyes. Boyle revealed that one minute of the original had been embedded in editing. This duration felt ‘‘weird’’ to the director as the ‘‘muscle memory’’ of the previous film is now embedded into audience’s minds. Even I was shocked at this fact. Still, these moments take on a whole different meaning with the decay of time.

Broadly speaking, a sequel can be burdened by the silhouette of the original that deprives the follow-up of individuality. “T2 is much more set in the present and that enables you to make some really smart observations. The reason I like this film — as I told you in the wings — is because it is its own film’’. Wood’s astute examination is a near perfect reflection on T2. Although the editing, music and other cinematic components pay respect to Trainspotting, the nostalgia of the original does not affect any of T2 but adds a deeper layer of nuance.

As the dialogue between Wood and Boyle transitioned to the audience, one member in particular referenced the director’s visual style in using multiple formats for shooting. “There is a real mixed bag there, there’s CCTV footage, mobile phone, film, digital go-pros. And you mix them all up, even in scenes where you might not think you would’’. Replying: “I think that is a modern audience that will take that, I think nobody is interested in the absolute purity of the visual expression anymore’’. Instead of capturing the “aesthetic” of these images, Boyle suggests that he shoots scenes to capture their tangible energy. At this point, the audience and I recognised that we were in the presence of a director who is still able to push the boundaries of film. After further intelligent audience questions it was inevitable for Boyle to receive a deafening ovation. Walking out into the cold Manchester evening, what was absolute, unlike the weather, was that I had witnessed a director who embraced the spirit of celluloid.

Wood explained that on HOME’s opening weekend Boyle solidified the philosophy of this great place: “Culture is our life blood, it runs through all of us and we should all celebrate it and have access to it.’’ After their busiest ever day with sell-out screenings after sell-out screenings, I personally could not think of a better way to conclude them than with a director who understands not only cinema, but wider culture and life. 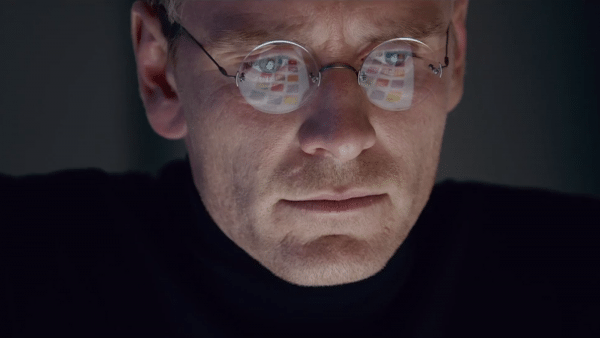 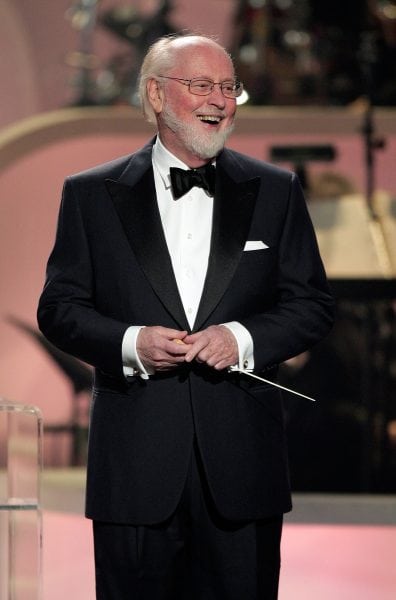