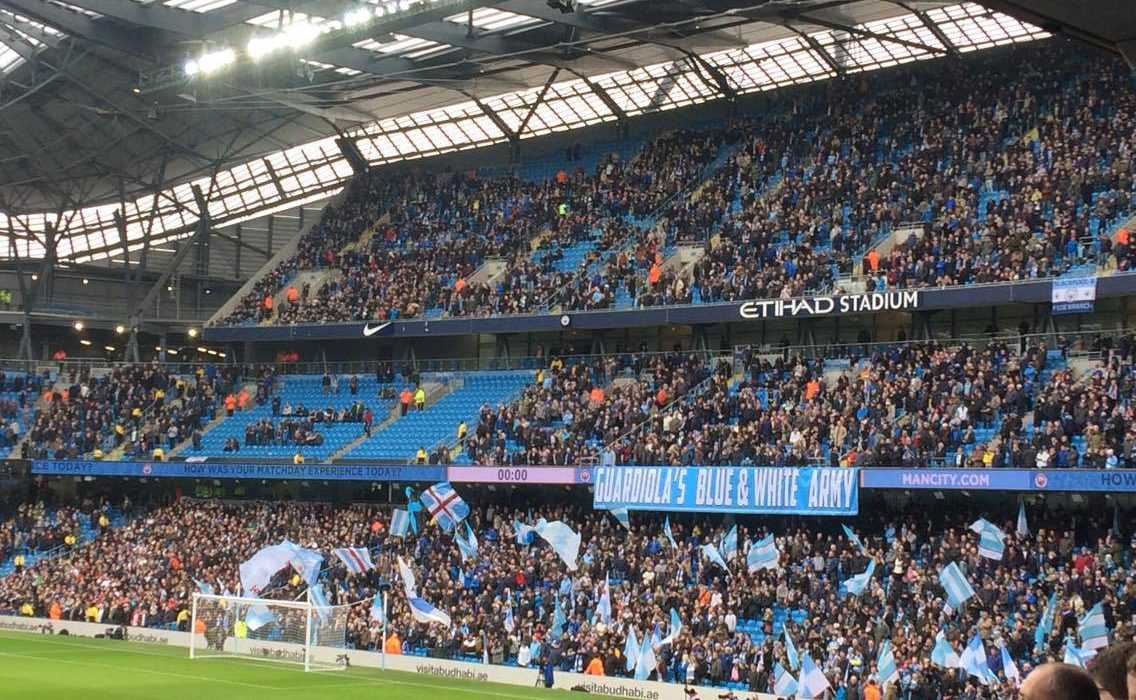 Photo: The Manchester City fans turn up with a fine display, as not many Swansea fans made the long trip

With a Welsh team coming to town I’ve been excited to use a Tom Jones reference all week. I once saw Tom Jones in a Costa in Salford. Swansea fans however, will be looking forward to going back to the green green grass of home, after just missing out on their comeback.

The relegation battling Welsh team came to the Etihad and were outclassed in the first half – City taking 66 per cent possession and bombarding them with shots and incredible pace from Leroy Sané and Raheem Sterling. Sterling was also booked for a clear penalty when brought down by Fabianski, and Jesus had a call for a penalty when Mawson dragged him down. Paul Clement afterwards said being only 1-0 down at half time was a “bonus to us”.

The Swans came out fighting in the second half though. Within minutes Willy Caballero was called into action to brilliantly save a free-kick from Gylfi Sigurðsson. On the 80th minute Sigurðsson capitalised on Swansea pressure and scored from a long-range drilled shot. Swansea won many ‘second balls’ and demonstrated the fight they will need in the relegation battle.

No, this isn’t the new property development show on Channel Four (although I personally would love a Kirstie Allsopp sports show), this is me telling you all about Guardiola’s fantastic world of formation.

The fluidity that Pep Guardiola has instilled into this City team means that everybody plays everywhere. Kolarov and Stones started at centre-back, but would occasionally sprint away into the final third, whilst Yaya Touré dropped back into centre back.

Feranandinho was playing right-back when out of possession – but dropped into a more midfield role when attacking. As for the front five, they were interchangeable throughout: Kevin de Bruyne, Sané and Sterling especially. It was all very difficult to defend against.

Man of the Match – Gabriel Jesus

With three goals in three games – not to mention his two assists – the 19-year-old wonder kid that is Gabriel Jesus could be giving Sergio Agüero a run for his money.

Jesus’ defensive work-rate is perhaps what sets him apart from many other strikers, and means that he suits Guardiola’s fluid style of play. He was quickly retrieving the ball to start attacks again – especially in the first half – and his flair and skill is only outdone by his surprisingly impressive strength. He provided a throwback to the days of Robinho at one point, as he stopped on the edge of the box to show us all a few step-overs before crossing the ball.

His first goal came from a bit of David Silva magic. Whilst the referee was tying his shoelaces, Silva collected a pack of blu-tac from the stands and blu-tac’d the ball to his foot. He then led a merry dance on the left wing, upset Martin Olsson, and cut into the box to cross. Sterling made slight contact, for Jesus to smash the ball into the back of the net.

Goal number two came on the 93rd minute from a bit of Silva magic again. Silva sent a fabulous cross into the box, and Jesus headed the ball down. Fabianski spilled – despite having a good game – and Jesus tapped in for the winner.

Special mentions to: Leroy Sané for his ending of Kyle Naughton’s career, and Alecksander Kolarov for a strong display at centre-back again with some pinging balls. Whatever pinging balls means.

Pep Guardiola: “Sergio [Agüero] remains one of the most important players in our squad… what we have to do in the [rest of the season], he will be so so important.”