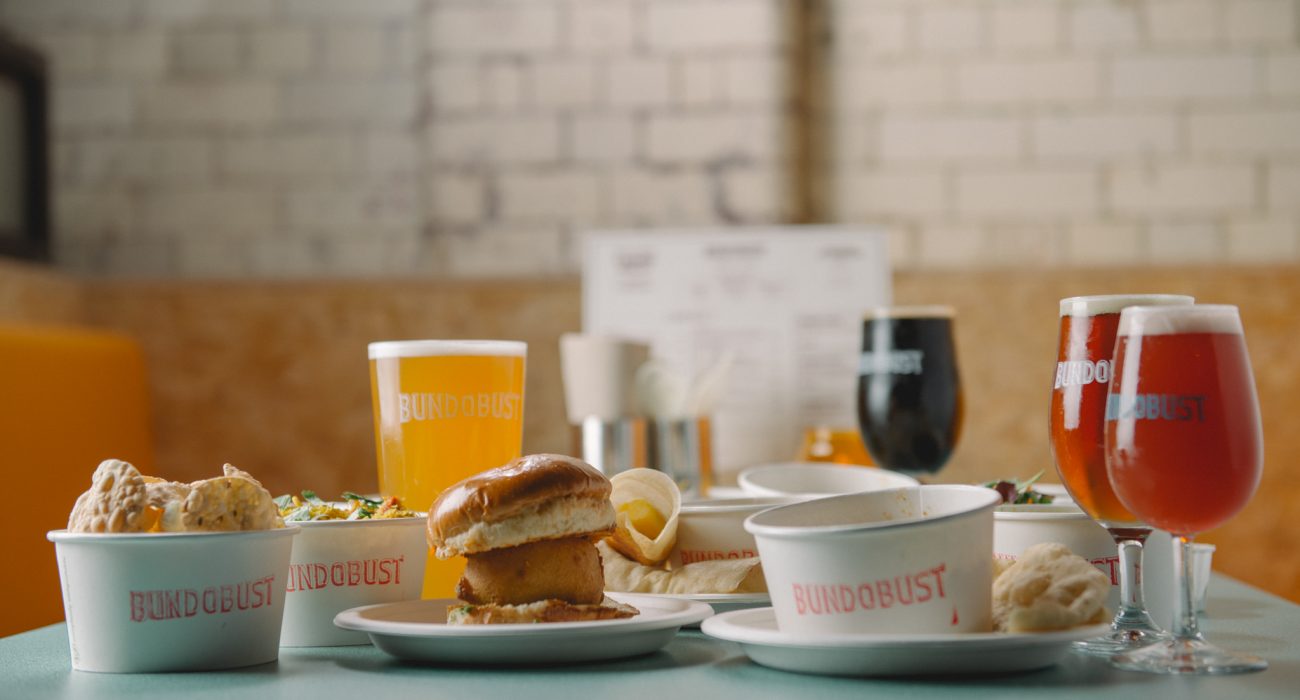 The Manchester branch of Bundobust finally opened their doors at the end of 2016, proof that the year could produce some positives.

Bundobust first opened in Leeds, a collaboration between two award-winning establishments: the restaurant Prashad, a finalist in Gordan Ramsay’s Great British Restaurant series, and The Sparrow, named by The Guardian as one of the UK’s top Craft Beer Bars.

They have quite a legacy to follow, but seem to be doing so effortlessly.

Finding this new Indian street food and craft beer bar off Piccadilly gardens was a bit of a task, with scaffolding surrounding the entrance and stairs down to its basement home — but it was well worth the few minutes it took to realise we were standing in front of it.

Once able to make my way down the stairs, I was greeted with a mess hall-styled restaurant, its décor dominated by exposed brick, bright signs, and a wonderful skylight offering a view of the rain-speckled typically Manchester scene of old brick buildings with broken windows.

At three o’clock on a Saturday afternoon the place was bustling, the energy of the upbeat music and our lively dining partners creating a contagiously enjoyable atmosphere.

After deciding to sit at one of the long shared dining tables — if you are looking for an intimate meal then perhaps look elsewhere — we began to look through the extensive and entirely vegetarian menu.

If you are an ardent meat eater I would advise against letting this aspect put you off, especially due to the very student-friendly prices on offer.

While we waited for our food we ordered a beer snack of popcorn and mini poppadums drizzled with green chilli and garlic oil, just one example of how Bundobust can transform simple dishes — it is not often popcorn gets a mention in a food review.

One of the standout things about this restaurant is the focus they place on their drink as well as food. The house Indian witbier ‘Bombay Dazzler’ was the perfect accompaniment to our food. Brewed with coriander, ginger and cardamom, it was a highlight of the meal.

Our five small dishes of Indian street food were presented to us in disposable paper bowls, and we quickly got stuck in.

The dishes included punjabi kadhi, a warm yoghurt soup with bhaji dumplings; paneer and mushroom tikka served with a red pepper ketchup and spinach chutney; and one of the specials, pav bhaji, a deconstructed bhaji with brioche buns, all equally delicious and original, unlike any other Indian food I had ever eaten before.

But I have to admit, despite the wonderful reprieve this dish gave to my delicate taste-buds, the best dish of the meal has to be the okra fries, described confusingly (perhaps just for me) on the menu as ‘fried lady’s fingers’ — tip: they do not mean the cake part of tiramisu.

Coated in chickpea batter and seasoned with black pepper and mango powder, this wonderfully flavoursome side-dish was the perfect alternative to your average side of fries, yet another example of how Bundobust manage to turn a modest dish into something you can print on a T-shirt — yes, they actually print okra fries T-shirts.

When a restaurant is able to sell T-shirts with one of their dishes printed on, you know they are probably doing something right.