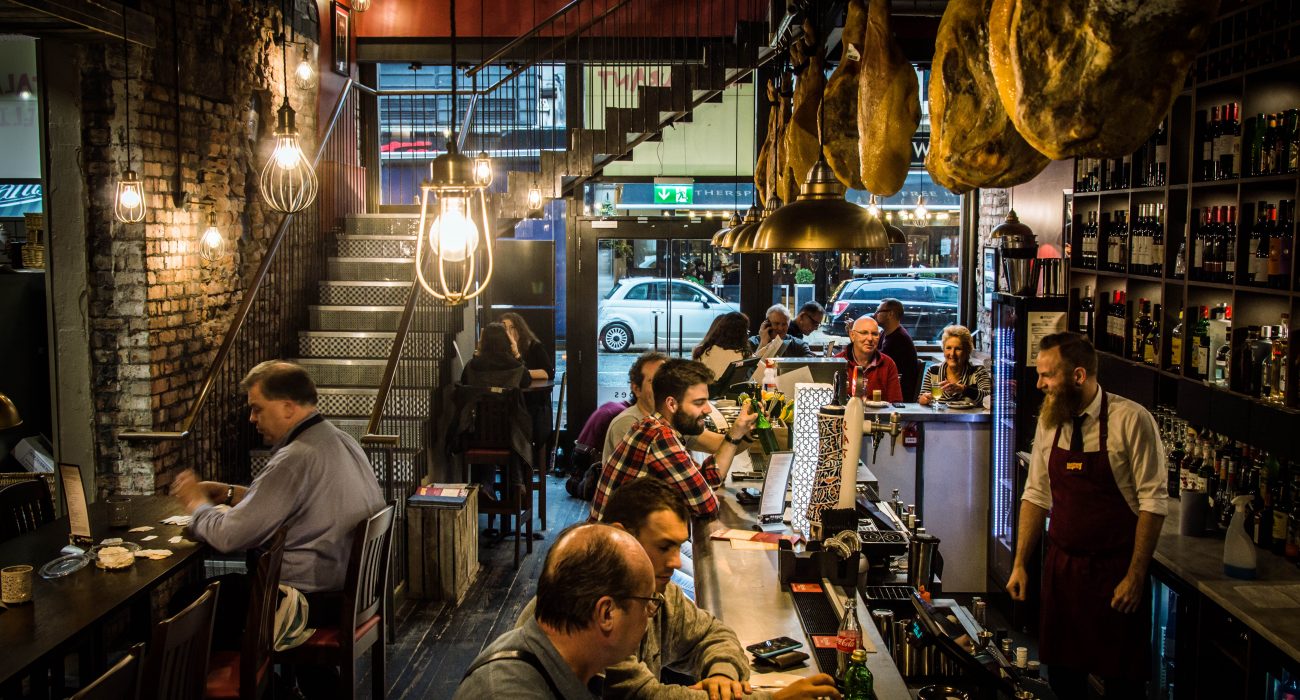 There’s a little hotel tucked in the hills above Ronda in Southern Spain that my parents have been going to since before I was even a thought. In fact, my grandparents stayed there the first year Molino del Santo opened. We returned last Easter for some much needed R&R and to enjoy their phenomenal food. It was there that, for the first time, I ate secreto ibérico, a succulent cut of shoulder from acorn fed pigs.

The memory of the taste flitted through my head when I visited a tapas restaurant in Liverpool but I failed to pin it down. The meal was excellent and I was happy to find that another had opened in central Manchester. It was called Lunya. I promptly forgot all about it. Fast forward to my return to Manchester and a chance shortcut through Barton Arcade bought me face-to-face with a sunshine yellow Mini Cooper with Moritz logo decals and a sign that had Lunya swirled across it. Remembering my trip to its sister restaurant, I promptly found a friend, Z, who was willing to visit and off we went.

Left in charge of the menu, I was delighted not only to find, but to recognise, the elusive secreto ibérico. I chose not to mention to my companion that it was served pink (perfectly safe with certain cuts and a chef who knows what they’re doing but can be off-putting) and ordered it. My other choices? Albóndigas (pork and beef meatballs), the classic patatas bravas, calamari, Catalan tomato bread, and my favourite, croquetas.

Despite the comparatively early hour (we arrived at 12:30), we thought a bottle of wine was the best way to start our catch up. I asked the sommelier to base his recommendations on the memory of a full-bodied red drunk at Molino. Peter Kinsella, chef-proprietor and resident wine expert suggested a Catalan wine with a similar flavour profile and after tasting it, we happily took his advice. If you ever want to get the most out of a wine list then make sure you ask for the sommelier, they are generally very approachable and eager to share their knowledge in order for you to chose the perfect bottle.

The tomato bread arrived rapidly, slightly warm and drizzled with an excellent olive oil. It had a fresh, clean taste — just as it should. The albóndigas, patatas bravas, calamari and croquetas followed in quick succession. Speaking as one who dislikes squid, their calamari is a revelation; slightly chewy but not in the least bit rubbery, unlike the horrors of my childhood. The rings of squid have been fried in a light yet crisp beer batter and are served sprinkled with sea salt, a well flavoured mayonnaise on the side.

To my advantage, Z announced he didn’t like allioli so I scooped up the top layer of crisp patatas bravas and enjoyed them alongside the small but perfectly formed albóndigas, the spicy sauces blending well with the cool allioli. The ham and cheese croquetas, normally the tapa I reach for first, were perfectly tasty morsels but could not stand up to the earlier, more punchy dishes.

As we came to the last of the potatoes, I reflected that it was nice to have a well executed meal that left me sated but not unpleasantly full. Then came the pork that, despite my delight in it’s presence on the menu, I had forgotten about. Six little slices, glistening with fat thanks to the diet of acorns, were arranged on top of a smooth beer and shallot purée and a tart red onion marmalade. As I ate the first slice, those wisps of memory became fully formed. This was the pork of my Spanish tinted dreams.

Despite proclaiming myself full, I never could resist a dessert menu, and summoned up even less restraint at the appearance churros on the list. We agreed to share as I dislike the chocolate on its own. Four pretty little churros soon came to the table, stacked next to a mug luxuriant hot chocolate. It was the sweetest full stop to the meal.

Half drunk bottle of wine tucked into my bag, we went downstairs to the deli attached to Lunya, exclaiming over an Aladdin’s cave of Spanish treats. With the bill came a feedback card and that gave 10 per cent off deli items, an impossible thing to resist when faced with so many quality ingredients. Z bought a Great Taste Award winning olive oil and I picked up some wonderful Catalan almonds, a firm favourite and excellent snack.