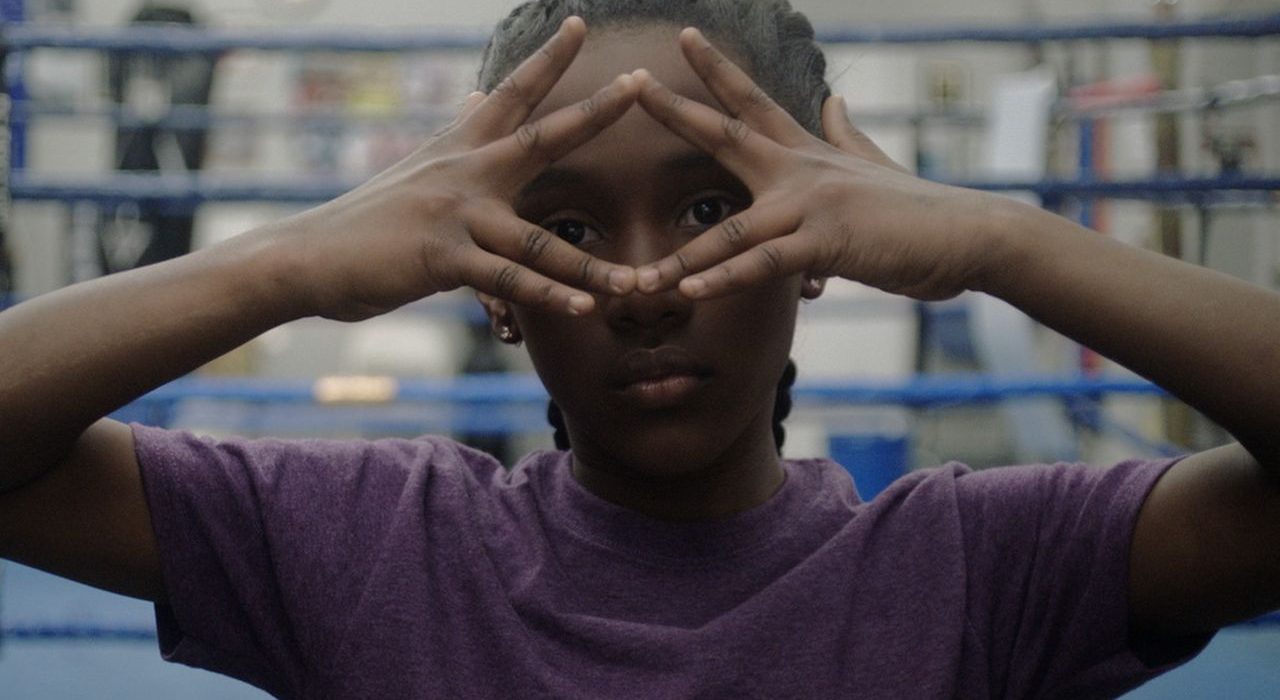 Thinking of a cliched coming of age dance film doesn’t instantly spring to mind as thought provoking raw cinema. Looking at the likes of the Step Up franchise and unavoidably the iconic Dirty Dancing, dance films are saturated with the same cliché tropes; a final liberating dance number where said boy and said girl restore a new equilibrium etc. Yet, Anna Rose Holmer’s feature debut The Fits rejects all these generic conventions.

Following 11-year-old tomboy, Toni’s (Royalty Hightower) movement from her brother’s boxing group to a dance troupe at their local community centre, her change of groups provokes numerous girl’s to experience the titled fits. Clocking in at tight 72 minutes, Holmer’s first piece of film channels the atmospheric feel of Mica Levi’s scores, as well as The Shining’s eeriness, whilst be able to present contemporary African-American adolescent communities.

Toni is an outsider in many regards. Being the only girl in her brother’s boxing class, she seeks to be like male counterparts. Strong, athletic, and agile; she is a binary to the girls she voyeuristically views in the neighbouring dancing class. Her idealised gender equals are tall, confident, and expressive in their dance. The distant she feels towards her fellow females is expressed in Hightower constantly being shot through barriers, window incision doors, and the ropes of a boxing ring. Working out with her brother on a motorway bridge — confined by a steel barrier —  Toni enjoys bonding with her brother through exercise. Yet through the cinematography, she is separated from each group.

Royalty Hightower’s performance captures a teenagers awkwardness and reserve. In one of her first dance sequences, the audience gain the sense that she is unable to fully let go of her body and resorts to tight boxing movements, juxtaposed to the aggressive yet flowing dancing. Practice makes perfect and as Toni develops her rhythmic movements everything comes tumbling down.  Holmer is not afraid to push the camera right into Hightower’s face. As a result of shooting Hightower in such a manner, the confined space of the community centre is specifically stressed. Extending this compact illusory atmosphere is the overall lack of paternal figures — enabling the attention to be focused on the girl’s, instead of cutting away to a domesticated environment.

As one girl suffers the first fit, Holmer decides alongside her DoP Paul Yee to move across a crowd of huddled girls. In another fit sequence, numerous girls cram around with their phones recording the events — Yee focusing his action through the phone screens. Not only does this work as a nuanced piece of cinematography; it works to reflect the reliance we as a human race now have towards phones and the problems that arise from social media et al. At first, it is unsure if these fits are parts of impulsive dance or not. The continual repetition of such fits take on different means for different girls. Sexual connotations natural orientate such events, yet each fit is expressionistic of each girl’s adolescent personalities. It is only until Toni’s newly found friends have all experienced these out of body experiences that she openly searches to be part of this particular group of girls.
The Fits’ snappy running time makes it inexcusably to avoid watching. Unlike previous lengthy releases like Scorsese’s masterful Silence and Toni Erdmann, Holmer’s film lacks any unnecessary fat and positively impacts the sustained ethereal eeriness.

Josh Larsen from FilmSpotting recently compared Holmer’s debut to another feature debut from Robert Eggers’ The Witch. The rawness of film-making on show in both works merges into the ominous ambience. The Fits is worth 72 minutes of your day and will play upon your consciousness long after the final credits have rolled.