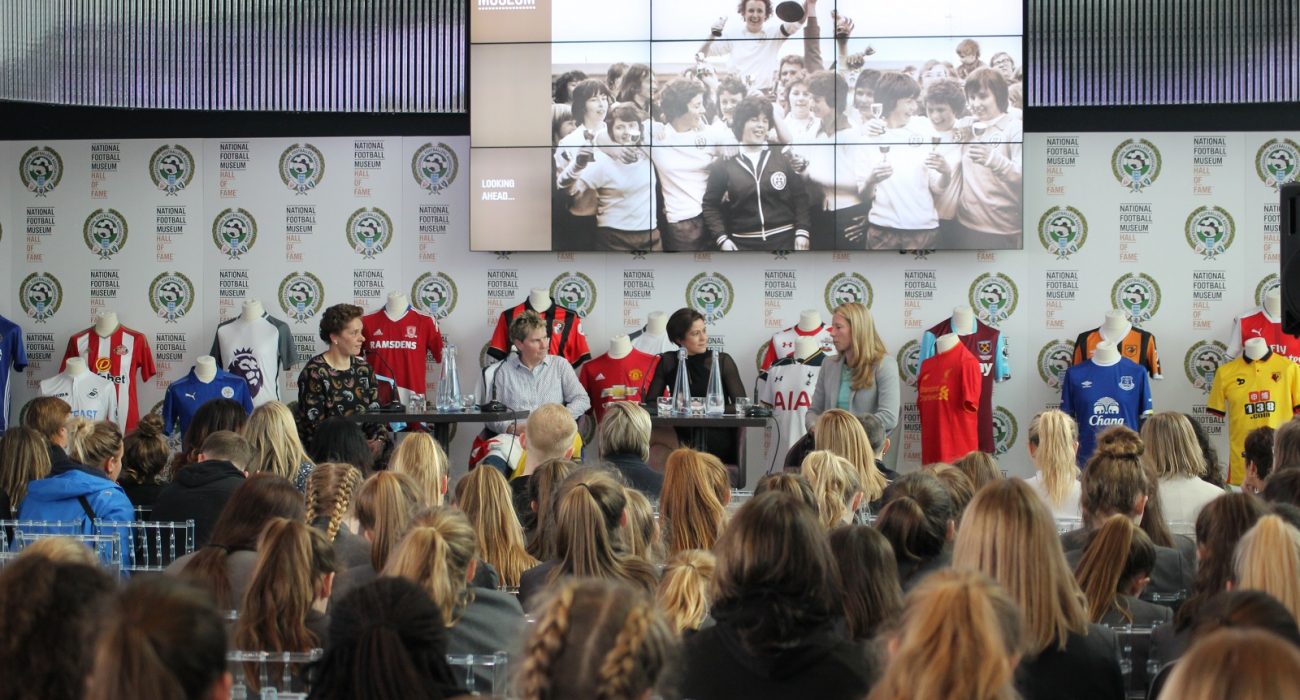 The suspension of male football league matches during the First World War allowed for women’s football to take its place as the nation’s sport, with Clubs forming up from the munition factories. After the war the sport still flourished, Boxing Day 1920 saw 53,000 spectators cram into Goodison Park to watch women in a charity football match.

Fast-forward a year to 1921, and the FA ban women from playing football. It became the man’s game. Women couldn’t play at most grounds and received no funding.

At the National Football Museum’s talk on ‘Suffragettes in Football’ on the 7th of March, Patricia Gregory talked of how she was one of those who pioneered women’s football and brought it back.

“My father wouldn’t take me to the football, because absolutely it wasn’t a place for girls” she says to an audience consisting mostly of school girls.

Patricia talked of how her local newspaper published her letter protesting that women should be able to play football. This resulted in her letterbox being flooded with letters from other young women wanting to play football, so she formed a Club just for girls.

Despite the ban, the Women’s FA was formed in 1969 with help from Patricia Gregory, but the English FA would not be affiliated with them until 1972 when the ban was lifted. The FA still gave the Women’s team no money.

“For the first 12 years of our existence we were run entirely by volunteers… running the club, the league and the association, putting big time constraint on people… when it came to setting up the England team… we couldn’t even get sets of kit.”

England goalkeeper Rachel Brown-Finnis, who retired in 2014, said of the pioneering women, “they set the standard as it was and set the foundation for my generation… it’s for the next generations to reap the rewards.”

The panel, hosted by BBC Sport’s Eilidh Barbour, had ex-England midfielder Liz Deigham present. She stated that she could not go to America on a scholarship because her employer would not guarantee her job when she returned. This was echoed by England’s second ever captain, Carol Thomas, who reminisced on how the England team all had jobs in the day, and met up at the weekend, travelling all over the country to train in the 70s and 80s.

Despite this, in 1984 the team managed to get to the European Championships Final, just missing out on penalties against Sweden.

Rachel Brown-Finnis on the other hand was of the next generation of footballers and was able to change her working life from full-time to part-time due to getting a professional contract. The added professionalism of women’s football in the 21st century has allowed for an increase in quality to the English game. It was under Finnis’ generation that Women’s football really started to take off, and now we can see it improving even further.

The FA had taken control from the Women’s FA in 1993, and brought more funding to the game. Since then there has been slow but steady improvement in the game. In 2015 England had their most successful World Cup, finishing third in Canada.

On the 4th of March this year, Ellen White’s 89th minute winner for England saw them beat Women’s Football powerhouse USA. Two days after this, the BBC announced that they had won the rights to showcase the 2019 Women’s World Cup, and BT Sport are continuing to show highlights for every Women’s Super League game.

2016 FIFA World Player of the Year Carli Lloyd has recently signed for Manchester City’s Women’s team too, as the English game is becoming more attractive to the world, and the money is being invested back into the game.

The only way is up for women’s football now, but sexism is clearly still a problem in the game. Carol Thomas said of her 1974 playing days that, “some of the comments we got from the men in the game… I’ll leave that to your imagination”.

Sexism is still alive in football, as is evident from the high-profile cases of referee Sian Massey-Ellis’ when she entered the male game in 2011, and Eva Carneiro as the first team doctor at Chelsea in 2015. With a steady influx of women entering the game, they could be a force in changing the attitude of many.