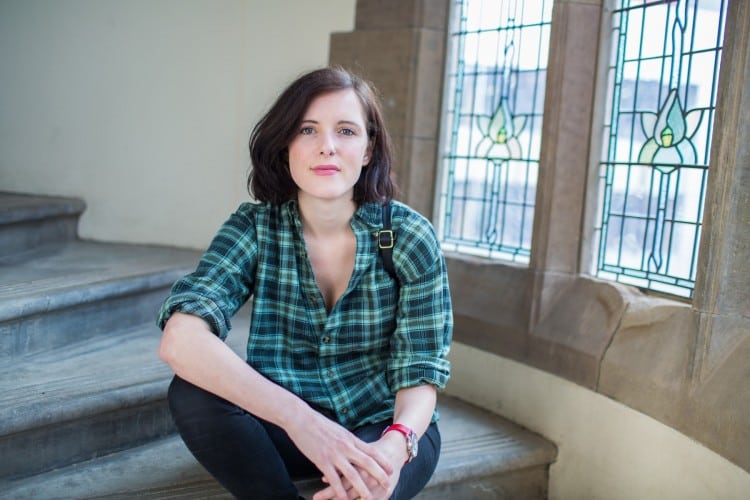 Inspired by online sensation ‘Humans of New York’, Archer came up with the idea after winning an online public engagement competition, ‘I’m an Engineer Get Me Out of Here’, in 2015.

From here, she has used the money to market her campaign, bringing out a website, social media channels, and leaflets about women in STEM that will be distributed in schools across Manchester.

Asked what inspired her to start the campaign, Archer says that she has also been heavily involved in public engagement and schools outreach since she came to the University of Manchester in 2009.

“I think there is a really good culture at the university that promotes social responsibility and working within the community, and so really I think that I have been largely inspired by my time here to continue to work with schools and the public and try to use my skills and expertise to help others.”

She says that she originally only had the intention to create leaflets for school children but “it was really through talking to the young people that I decided to make it a more interactive, online campaign as well as the physical leaflets.”

The campaign’s online presence and visualisation of subject’s stories seems to be popular, with Archer remarking that “the combination of a quote and a photograph on Twitter have been an incredibly effective way of telling the stories of people in a relatable way.

“For me that’s how we should be communicating role models to those who will benefiting from them — not sharing their job profiles but instead sharing who they are as people.”

“A really nice impact that we weren’t expecting so much was just how many female scientists and engineers have engaged with the campaign, and how important that has been for those women – to hear these real stories about other women in STEM”, says Archer on the overwhelming support she has received since the campaign launched.

The ‘relatability’ of these stories is a huge reason for their popularity. Archer explains that being a woman in science isn’t just about the job. “Sometimes [the story] can be relating to struggle — feelings towards PhD’s that perhaps aren’t always said, or struggles with mental health that can be invisible and hard to talk about”, she says.

“It has also been great to see how supportive that community have been, congratulating the women when they speak of their achievements and ambitions.”

But Archer is adamant that the campaign isn’t just to inspire female scientists, but to showcase the responsibilities scientists have to encourage women to enter the field.

“Both [female and male scientists] are crucial in being supportive and encouraging mentors for young women interested in STEM subjects. On an individual scale, I think it is about being role models for others.”

And she makes clear “that [this] isn’t about being perfect” and that for her, “it’s about being honest and open – just having a chat, sometimes that can be all it can takes to help someone feel like they belong, or that they are not alone in what they want to achieve.”

Greater authorities should also “question the gender gap — challenge conference leaders if there is an unequal amount of female speakers, challenge universities on what they are doing to support and encourage Women in STEM, challenge policies that have a disproportionate affect on female workers,” she explains.

Whilst the original project is still underway, Archer already has plans for the future. She says: “I am also planning a few events in the future to bring the campaign more into the public view, in the first instances based in Manchester but perhaps in the future even further afield.”

“We also have a few collaborations coming up that I am excited about”, which includes Prof Danielle George’s story featured in the campaign on International Women’s Day itself. Archer remains tight-lipped on revealing any more exclusive projects, explaining that details with be revealed in their newsletter in the near-future.

On her favourite story so far, Archer says that “although all that is seen through the campaign is 4 quotes and images, I feel that privileged that I get to see so much more about these women” and that the time she spends with each woman in valued. For that reason, “no story is above another in my opinion.”

So what does International Women’s Day mean to Archer? She explains: “It’s a day to celebrate the work and lives of women around us — that could be the accomplishments of those at the IWD Manchester awards”, at which Archer has been nominated for this year’s Outstanding Woman award, “the achievements of our mums, sisters, daughters, friends — and also remembering the work of those women who fought for our rights, who fought for the chances we have now to accomplish those things.

“It is also a day to look forward to the future, and the work that still needs to be done, and looking at how each of us, men and women, can help support women and girls both in the UK and around the world.”