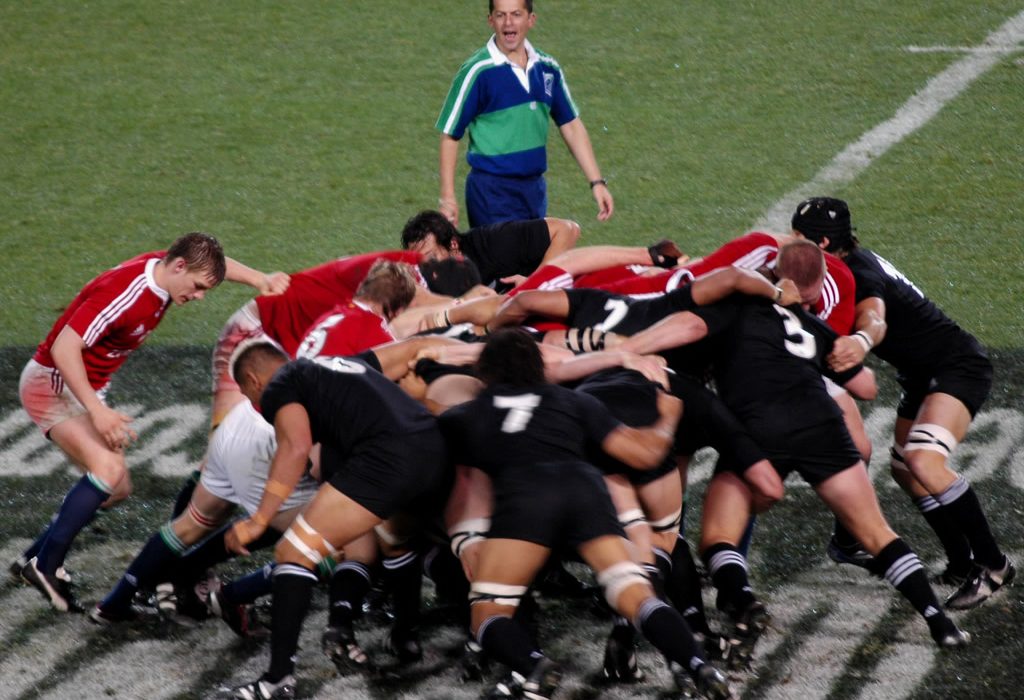 The Lions on their last tour of New Zealand in 2005, Photo: Wikimedia Commons

Despite this bad omen, the Lions come off the back of a victorious tour to Australia in 2013. This year’s 6 Nations was the last competitive international rugby for the players from the home nations, England, Scotland, Wales and Ireland, to stake their claim for squad, or even starting, places.

Warren Gatland will be the head coach for the summer tour, having fulfilled the role in 2013. His experience in bringing players from different nations together to form a winning side will be crucial.

In 2013, with Wales the dominant team in the 6 Nations, the Lions squad was largely made up of Welsh players.

However, given England have won back-to-back 6 Nations titles, the squad is likely to be dominated by English players. Assuming there are no major injuries, here are my predictions.

With the forwards, there are positions with real strength in-depth and positions deficient in quality options; Gatland must consider his starters, as well as who can make an impact off the bench.

At loose-head, despite being injured for most of the 6 Nations tournament, I expect Mako Vunipola to start, pipping his England teammate Joe Marler and Ireland’s Cian Healy, who will likely make the squad, to the jersey.

Moving on, no hookers have made a real statement this year. One would assume Dylan Hartley, England’s captain, will get the nod considering his experience, however, his England teammate Jamie George has arguably been playing better when coming on as a sub. The Hartley-George combination provides a good change of style and should be incorporated into the Lions.

Unless blighted by injury, it appears Ireland’s Tadhg Furlong is set to secure the tight-head position, with Scotland’s WP Nel providing solid back-up assuming he recovers from injury.

There is some real quality in the Second Row. Alun Wyn Jones, a Lions veteran and the likely candidate for captaincy, has proven quality and is a certain starter. England’s Joe Launchberry and Courtney Lawes have been immense this tournament, the shining lights in often average performances; Maro Itoje, although playing flanker under Eddie Jones, usually plays here too.

Also staking a claim is Jonny Gray, who has been fantastic in an upstart Scotland team. I expect these five to all make the squad. While I would love to see Itoje start, I think Gatland will look to experience, with Launchberry playing alongside Jones. Itoje offers real impact off the bench.

There is strong competition in the back row. At No.8, Billy Vunipola has arguably been the most improved player since Jones became England coach: his blend of dynamism and power will be important against a fierce NZ side. Assuming full fitness, he will start, with Ireland’s Jamie Heaslip his backup.

There is less certainty in the flanker positions.

At blind-side, CJ Stander has been Ireland’s exceptional player in the tournament, yet, Sam Warburton has looked rejuvenated without the burden of the Welsh captaincy duties. While Warburton has Lions experience, I would like to see Gatland use both against NZ. Wales’s Justin Tipuric and Ireland’s Sean O’Brien will contest the open-side position, with Gatland likely to favor the familiar Tipuric.

Moving on to the backs, it will be intriguing to see how much precedence Gatland gives to national partnerships, the chemistry between certain individuals.

At scrum-half, Ireland’s Connor Murray, England’s Ben Youngs and Scotland’s Greg Laidlaw are viable options, with Wales’s Rhys Webb a dark horse after good performances in the tournament. While I expect Murray to start, Youngs will be crucial to providing impetus off the bench.

Although he is injury-prone, Ireland’s Jonny Sexton will secure the fly-half position, linking up with teammate Murray. Wales’s Dan Biggar will likely secure the back-up role, while England’s Owen Farrell can also fill the role if needed.

Farrell will be the starting inside centre. Along with Vunipola, he has improved massively under Jones. While his kicking, both points and place, has always been exceptional, he has added incredible nuance and poise to his attacking play; he was instrumental in England’s rout of Scotland.

However, if Gatland intends to stick by his ‘Warrenball’ philosophy, Ireland’s Robbie Henshaw will play 12. However, given his quality, Farrell has to start.

At outside centre, there is competition between the Welsh household name Jonathan Davies, a Lions starter in 2013, and England’s Jonathan Joseph: Joseph’s performance against Scotland (scoring 3 tries) will likely give him the edge.

I expect Wales’s George North, back in form, and England’s Anthony Watson to start on the wings. North was talismanic for the Lions in 2013: his try in the first test was immense. Watson, a classic speed merchant, provides the perfect accompaniment to North’s power.

Moreover, it seems destined that Scotland’s Stuart Hogg will start at full back. He has been the diamond in an electric Scottish backline in this year’s tournament. However, concerns over his defensive capabilities, as well as his ability under the highball, will mean Ireland’s Rob Kearney and England’s Mike Brown are necessary inclusions in the squad.

Finally, as a veteran of the 2009 and 2013 Lions’ tours, Alun Wyn Jones will surely be named tour captain.

The Lions’ tour of New Zealand will be a fantastic spectacle, especially given the strong English contingent likely to occupy starting positions.

Eddie Jones, with designs of taking England to the top of the world rankings, will be intrigued to see how the English contingent plays against NZ.

Yet, despite the quality the Lions will take on tour, I expect New Zealand to win the series 2-1.