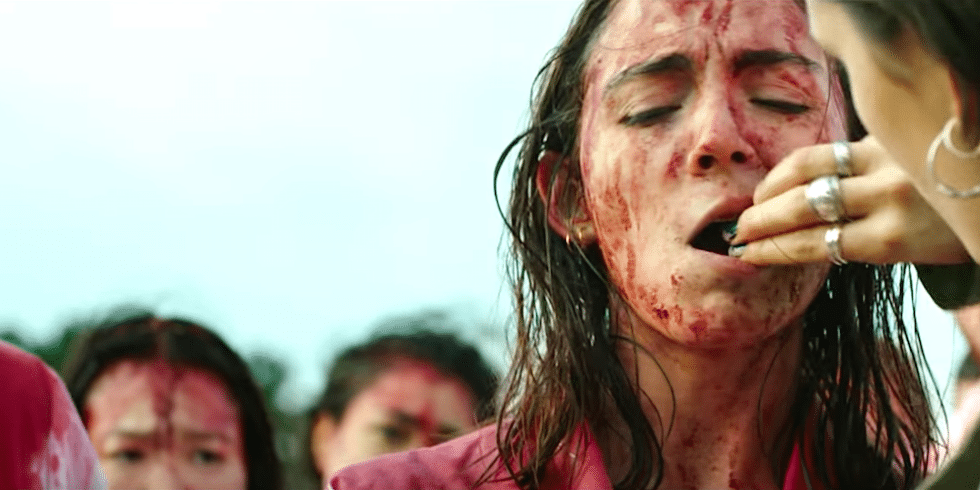 Viewing cannibalism and cinema, they share a close relationship with one another. Most famously springs to mind Hannibal Lecter and his conniving schemes. Working to unearth humanities darkest side, the consumption of human flesh has mostly served something greater and more meditative than simply shock horror entertainment.

Similarly, in Cannibal Women in the Avocado Jungle of Death, cannibalism is used as a vice to explore the boundaries in which women faced in 80s consumerist society. Also adopting the use of cannibalism as an allegorical study of humanity is Raw, created by first time feature writer-director Julia Ducournau.

Not only does the film analyse what it means to consume fellow humans, but too works to explore the strangeness of university, the discovery of one’s own sexual identity and the restrictions that our social environments place upon us.

Although this appears a mouthful of thematic elements when listed, Raw deals with such issues in nuanced manner — perfectly merged with the horror elements. Like any great horror genre piece, Ducournau’s first feature film does much more than scare you — it fascinates and seek to be much more than entertainment.

Opening in a longshot of a misty road, iconic of the horror genre, Raw appears to be going in one straight forward direction, like the road itself. Yet, with an abrupt cut, the narrative shifts to Justine (Garance Mariller) who is travelling to veterinary school in Belgium. Her campus is isolated and no traces of society can be found surrounding the university.

Stopping at a road side restaurant with her parents, all Justine gets to eat is a plate of mash potato. Like her parents, she is a vegetarian. Arriving at night, her new environment is obscured by the darkness. After being inaugurated into the veterinary fraternity via glorious red gloop, she proceeds to the final stages of being accepted into this frat group.

Confronted with jars of rabbit liver, she is forced to eat a small piece. Her new life instantly challenges all the ideas to which her parents have created for her. Eating the meat, she proceeds to throw it all up, leading to the appearance of a grotesque rash.

Awaking an inner urge for human flesh, eating this rabbit liver is the start of Justine’s discover of self-pleasure and indulgence. Yet, the boundaries of the fraternity dictate her life. Students are constantly awoken in the middle of the night and are forced into acts of humiliation and mockery of their innocence.

Extending the atmosphere initially felt after arriving at university, Justine’s isolation in the frame extends such an impression of her loneliness. It is only until Justine is reunited with her party animal sister Alexia (Ella Rumpf) at a student party, in one of the decaying sections of the campus, that she starts to open up.

Alexia is at the same university as Justine and is one year ahead, both in terms of education and recreational activities.  Like Mia-Hansen-Løve’s Eden, Ducournau in numerous party scenes creates a visceral experience of youth nightlife. Like the youthfulness reflection of house/ garage music on Félix de Givry’s Paul in Eden, Raw’s diegetic soundtrack reflects the lively vigour of its student setting.

Using The Dø – Despair, Hangover & Ecstasy in one sequence demonstrates the liberation and freedom experienced at university. The aggressiveness of Justine’s cannibalism is expressed through ORTIES – Plus Putes que toutes les Putes. Working in harmony with the demented movement of Justine in her bedroom mirror, this hip-hop song works to emphasis cannibalisms freeing of her female sexuality and inner desires.

Lastly, the orchestra score of Jim Williams harks back to classic horror. Used in one of the film’s best scenes, the music’s emphatic qualities further Laurie Colson production design and lighting. Taking an Argentina and giallo approach, lighting the grey walls of the halls with deep reds alludes towards the iconography of the horror genre. Moreover, it represents Justine submersion into her obsession with human flesh.

As her cannibalistic urge grows, so does her sexual desire for her gay room-mate, Adrian. Similarly, Justine’s bond between her sister also develops. Strengthened in a waxing scene, the best since A 40-Year-Old Virgin, it is chiefly through this pampering that unearths a commonality between the two sisters.

Using the vacuous spaces of the university to her advantage, Ducournau’s eerie corridors and rooms filled with living and dead animals evidently references the nightmarish quality of Texas Chain Saw Massacre.

Ducournau doesn’t see her film as a gore fest, and rightly so. With moments of dark comedy, family drama and bildungsroman, the film covers a wide spectrum of genres. Raw has been labelled as a ‘barf fest’ by some audiences and critics alike in the US. One theatre in LA gave out ‘doggie bags’ before some screenings.

This publicity could be seen as a positive in it is mainstream attention towards an independently created film. Yet, it holds a negative impact in my eyes as its ignores the film’s intelligence in being more than just blood and guts.