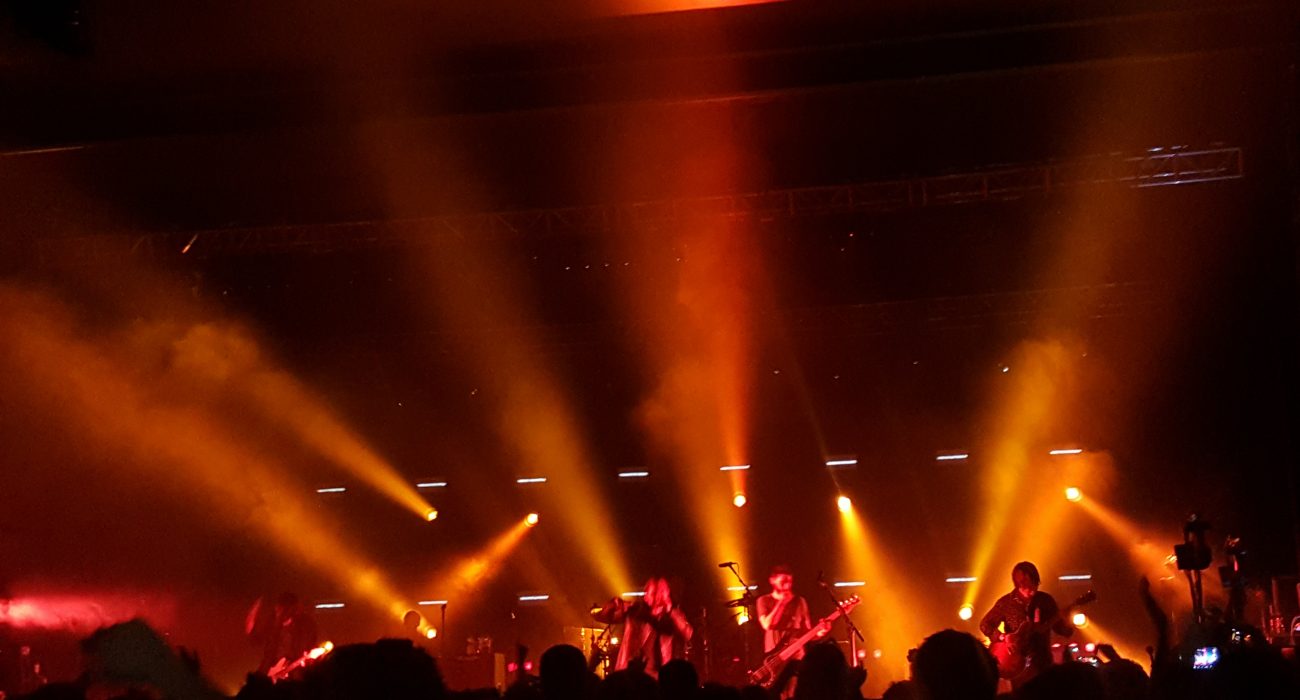 Live: You Me At Six

I entered Manchester Academy last Sunday with a need for that cathartic chaos, that invigorating energy and that sweaty sense of unity amongst strangers that only a gig can truly satisfy. And boy, did You Me At Six deliver.

The band kicked off the set with the title track from their latest album, ‘Night People’, which immediately channelled the crowd’s energy in the right direction with its stompy beat and gritty chorus. This was sharply followed by the anthemic ‘Underdog’, and from then on the set was a brilliantly chaotic and energetic celebration of the band’s generation-defining career.

The show was consistently exceptional in its deliverance and reception, with this year’s ‘Swear’ inciting the same intensity and fervour amongst the crowd as pop-punk favourites like ‘Save It For The Bedroom’ from the band’s debut, Take Off Your Colours, due to turn a decade old next year. This milestone was picked up by vocalist, Josh Franceschi, who even hinted at the possibility of a ten year anniversary tour.

Josh’s performance ranged from the sultry tones of ‘Spell It Out’ to the growling drama of ‘Bite My Tongue’ in a compelling display of the front-man’s talent, while guitarists Max Helyer and Chris Miller masterfully maintained the balance of volatility with refined riffs, capturing the room.

One thing is for certain; Rock’s not dead. Rock is alive and kicking. Rock just evolved, like all good things must. And in that room, in the middle of a crowd that was dripping with enthusiasm (and sweat) I knew what ‘rock’ meant, what rock means now, because it was right there.

And while rock has evolved, You Me At Six evolved with it. You Me At Six have, at the very least, proved that they will not be filed away with the rest of your CD stack of bands you used to listen to. The attitude they brought to the stage was as refreshing as it was reminiscent, and the result was proof that this band, just like the genre they represent, is sticking around for a good while yet.

I could, quite easily end this review here. Certainly, word count suggests I should. However, I wanted to bring up something that Franceschi himself paused the set to draw attention to.

It is often the case that a band will draw a momentary lapse in their set to make a ‘speech’, say a few words about the current state of the world. And it is often the case that this is met with the odd few guys at the back groaning about how the band should just ‘play another song’. But when Josh stood on stage and he spoke about being anti-racism, and anti-homophobia and anti-Trump, it really hit me just how important that was. As an LGBT+ female, that had actually experienced homophobia horribly close to home that day, I saw just how powerful it was to have a band pledge their support for you, in front of thousands of people.

So, going back to my point about You Me At Six carrying the banner for British rock music, there really isn’t anything more rock than calling people out on their shit, and using your platform to help make this world just a little bit better.

But regardless of all of that, there is a reason underneath it all that You Me At Six’s success has endured for a decade; they are fucking good at what they do. So good, in fact, that a few days later I bought myself a ticket to see them again in Birmingham!

Tags: Live review, Manchester Academy, night people, take off your colours, You Me At Six