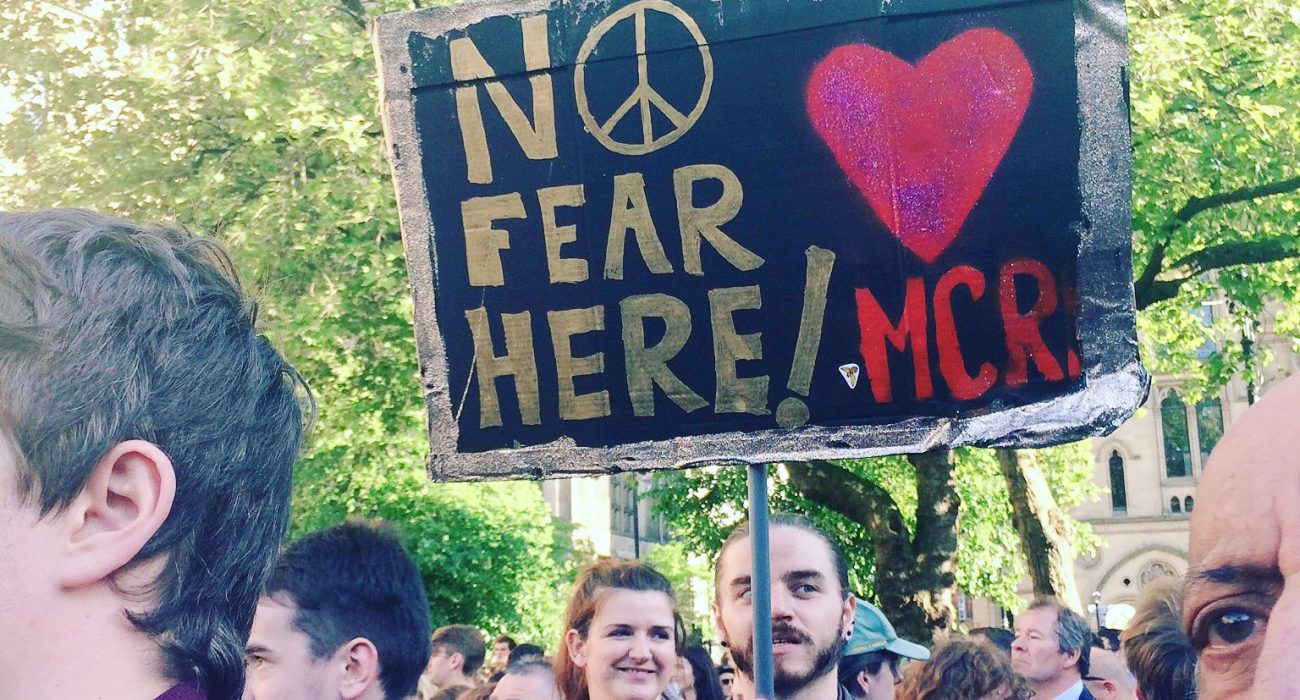 Albert Square was packed with thousands of mourners on Tuesday evening, as Mancunians came together after the horrific attack that took place at Manchester Arena on the night of Monday 22nd of May.

Placards throughout the crowd read “I heart Manchester” as a diverse range of people stood in silence, many in tears, to remember those lost. Listening to speeches by the Lord Mayor Eddy Newman, Greater Manchester police chief Ian Hopkins, and the Bishop of Manchester David Walker, many were visibly moved.

Frankie, a 19 year-old student who spoke to The Mancunion at the vigil told us how important she thought it was for the city to come together at the vigil, including students, “to show that we don’t stand for this kind of terrorism and that the city is stronger than what they are trying to divide us into”.

Flowers left behind after the vigil. Photo: The Mancunion

The loudest response of the evening was for Tony Walsh who performed as Longfella, reading his poem ‘This is the Place’.

Walsh’s passionately delivered lines lifted the spirits of those in the crowd, with the poem celebrating everything that makes Manchester so unique, with many lines receiving outbursts of applause including: “So we’re sorry, bear with us, we invented commuters. But we hope you forgive us, we invented computers.”

The poem also celebrated the welcoming nature of Manchester, which has become the home of so many diverse communities over the years: “Some are born here, some drawn here, but they all call it home.”

This sense of diversity and community spirit was seen from the Manchester Sikh community. Sikhs from five different temples attended the vigil and as one person from this group explained to us, they were “gathered here as a Sikh community trying to help humanity… we can’t do much but we are trying to be helpful and trying to be a part of the community.”

Manchester Sikh community handing out free food to those at vigil. Photo: The Mancunion

The final lines of Walsh’s poem read: “We keep fighting back with Greater Manchester spirit, northern grit, Greater Manchester lyrics/ And it’s hard times again in these streets of our city/ But we won’t take defeat and we don’t want your pity because this is the place where we stand strong together with a smile on our face, Mancunians forever.”

Walsh’s inspirational poem received rapturous applause and cheers from the thousands gathered in the crowds, and has now been shared widely on social media with many commenting how much the words resonated with them.

Cooper also commented on how the vigil showed how “all ethnic minorities [are coming] together as a team and showing support”. This was highlighted as the crowds were dispersing after the vigil when a old woman hugged young people from Muslim Aid, while a paramedic approached them to shake their hands and thank them for their support.

A woman hugs young people from Muslin Aid at Tuesday’s vigil in Albert Square while a paramedic shakes their hands Photo: The Mancunion

Maureen, who came with groups of Samaritans from across the North West, shared her personal perspective on the attack: “I’ve got a Grandaughter who’s 10 years old who thinks Ariana Grande is the bees knees, and it could quite easily have been her… so I felt that I needed to do something to show that I cared.”

She added that if anyone needs to talk to someone in the aftermath of the attack the Samaritans are available 24 hours a day, urging people to never “sit and think that you don’t know who to talk to or how to talk about something”.

James, 26, who described himself as a local lad from Manchester, summed up the atmosphere and spirit of the Mancunians at the vigil: “We’re united together, it is a tragedy and it is something we need to face together regardless of where we come from, regardless of who we are, we just need to stick together and be strong.”