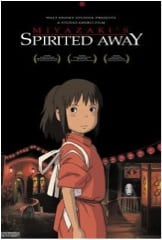 Sweeney Todd meets Gilliam’s Brazil (1985) in  Jean-Pierre Jeunet’s post-apocalyptic, cannibalistic French black comedy.  This foreign language film is set in a decrepit apartment building in a dystopian France where the ground floor butchers is ran by a murderous landlord.  He lures budding employees through job adverts into his shop, whom he then kills and uses as a cheap meat to sell to his customers.

However, when his daughter Julie falls in love with the butcher’s latest potential victim — the failed circus clown Louison (Dominique Pinon) — she seeks help from a group of rebels named the ‘Troglodistes’.  Consequently, all-out war ensues between the revolutionary faction and the homicidal landlord, with the central lovebirds caught in the crossfire.

Delicatessen is a stylish and innovative caper which merges constant giggles — the “squeaking spring” scene is hilarious — with the grotesque and dark.  Love and vegetarianism emerge surprisingly as the film’s dominant themes, and the feature was the perfect debut for director Jeunet.

Before Christopher Lee’s Dracula, and the consequent flood of sexy, cliché-ridden ‘vamp-dramas’, there was F.W. Murnau’s Nosferatu: A Symphony of Horror.  Not to be confused with the 1979 Werner Herzog remake (albeit similarly impressive), Max Schreck is absolutely terrifying in the film which firmly established vampirism on the big screen.

Cited by many critics as one of the scariest films ever made, Nosferatu is a nightmarish, expressionist work in which protagonist Thomas Hutter travels to Transylvania to visit a new business client named Count Orlok.  However, after darkness falls, Hutter suffers horrible night terrors whilst staying at Orlok’s castle, as well as noticing strange puncture-marks on his neck upon waking.

The age of the film might deter some, but I cannot emphasise enough the true horror and ingenuity of Murnau’s German horror.  The hollow yet piercing eyes of Schreck’s eponymous vampire will play on your mind way beyond viewing.

Dubbed by many as the Brazilian Goodfellas (1990), City of God was nominated for 4 Oscars at the 2004 Academy Awards, and was unlucky to leave empty handed.  Director Fernando Meirelles set his electrifying tale of gang warfare, love and coming-of-age in the unforgiving environment of the Rio de Janeiro favelas.

Centred on Alexandre Rodrigues’ Rocket, it follows the young Brazilian boy and his proximity to the local gang-life.  The erratic and explosive Li’l Zé (Leandro Firmino) is disconcertingly tyrannical as an equally juvenile resident of the slums who unlike our protagonist, longs to be involved in the hoodlum lifestyle.

The film spans the 60s and 70s, showing Rocket’s transformation from infant into aspiring photographer, whilst chaos and crime rise to unprecedented levels in the favela.

City of God is exhilarating and charming, and for a foreign language film which offers such a gritty and unfiltered portrait of life in the Brazilian slums, is uplifting and visually stunning.

Amores perros marked the directorial debut of Alejandro González Iñárritu, known now for Oscar magnets Birdman (2014) and The Revenant (2015).  This Mexican drama/thriller – marketed in the US as “Love’s a B*tch” – is split into three different stories, which are all seemingly connected by coincidence and fate.

The first is titled ‘Octavio and Susana’, the former played by Gael García Bernal, and the latter his character’s sister-in-law, who he is in love with.  In order to gather funds for the pair to elope and leave Susana’s abusive husband Ramiro, Octavio becomes involved in the dog fighting business with his brother’s dog Cofi, leading to altercations with local crime-lord and dog-fight tyrant Jarocho.

As tensions rise to boiling point with Jarocho, Octavio is involved in a car collision, and it is this accident which joins together the two succeeding stories.

Amores perros is a powerful anthology in which love and canines (“Amores perros” literally translates as ‘love is dogs’) act as the glue between the film’s characters and events.  Powerful, spirited yet tragic, Iñárritu’s Mexican masterpiece is a deserved Oscar nominee and BAFTA winner.

Studio Ghibli are responsible for some of the greatest and most enchanting animated films to be released on the big screen, and Spirited Away tops the pile.

Directed by Ghibli veteran Hayao Miyazaki — the man behind several other classics by the studio, including My Neighbour Totoro (1988) and Princess Mononoke (1997) — Spirited Away is a fantastical tale which tells the story of the young Chihiro, voiced by Rumi Hiiragi.

Upon moving to a new home with her family, she discovers a secret, magical town which is occupied by various weird and wonderful creatures, overseen by the sinister witch Yubaba.  After Chihiro’s parents are taken by the sorceress, she is helped by the enigmatic Haku to confront Yubaba and find them, so she can return to the real world.

Near perfect, Miyazaki’s 2001 Oscar winner is a moving, beautiful fairy-tale, with a certain degree of darkness which allows it to transcend age groups, entrancing both toddlers and adults.  It now acts as a nostalgic and stunning reminder of the age of hand-drawn animation, before CGI and 3D usurped the paintbrush.