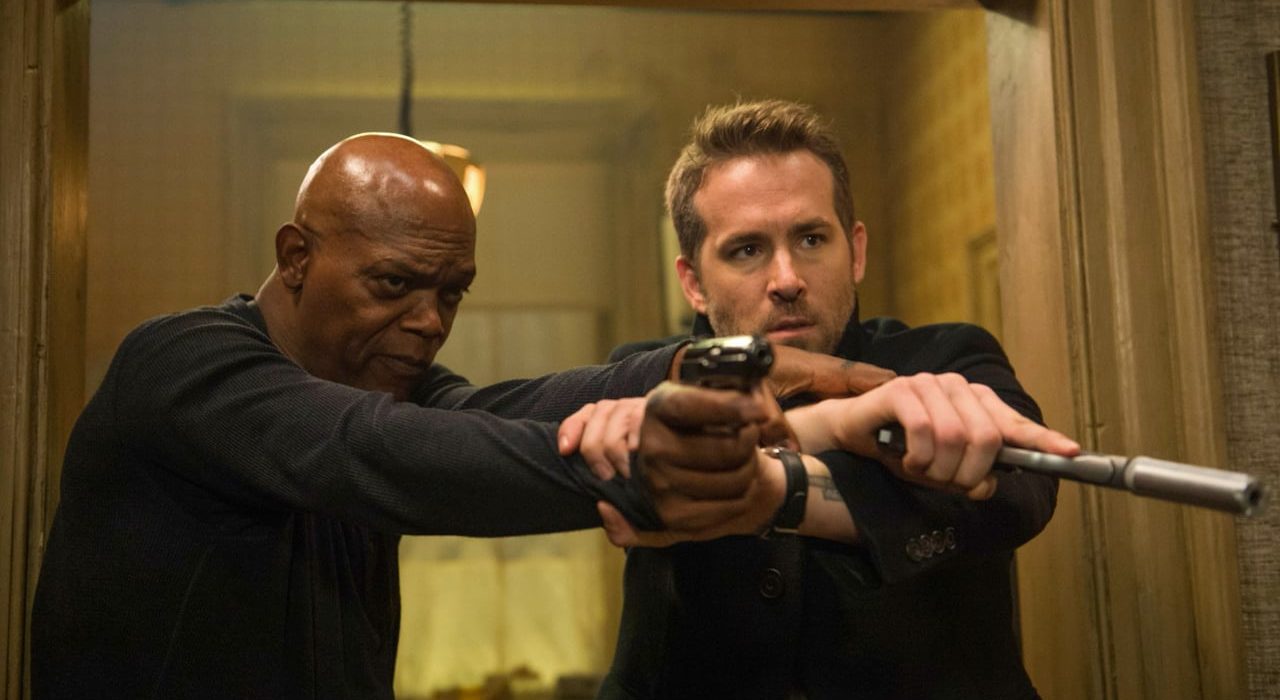 ‘Triple A’ bodyguard to criminals Michael Bryce (Ryan Reynolds) finds himself having to protect professional hitman Darius Kincaid (Samuel L. Jackson) on an excessively violent road trip to Amsterdam so he can testify at the International Criminal Court.

The first scene shows us a successful, sharp Bryce bid farewell to his client, Japanese arms dealer Takasi Kurosawa. At the last minute, Kurosawa is shot, and from there the film fast forwards to Bryce two years later who has experienced a steep downfall in his status and career. Here, the brilliant Richard E. Grant has a not so brilliant minor role as a cocaine addicted CEO under Bryce’s protection that has perhaps three minutes of screen time, never to be seen again.

For the rest of the film, we follow the same formula of intensive gunshot scenes and car chases immediately followed by soporific emotional drivel that could be described as “character building”, always about Bryce’s love interest — played by Elodie Yung — who apparently ruined his career and broke his heart. We’re also presented with Kincaid’s explosive imprisoned wife, played by Salma Hayek, who dialled up the hot-headed Latina stereotype to the point of derision.

Attempts at intrigue are constantly made, that regrettably could never actually be intriguing because of the persistent use of music to emotionally spoon feed us. There is a distinct formula to the buddy-genre, which Hughes follows religiously offering nothing new. It is a tried and tested method that works with audiences, thus explaining the continual funding of such films, but this is a particularly bad example and hints towards diminishing returns. That is of course until the next one, where hopefully someone will add something to the genre.

Awful acting paired with dialogue just as unenticing made watching Ryan Reynolds painful. He appears to be going for the lovable sarcastic hipster — one who is morally conflicted when he starts to contemplate what is worse: protecting criminals or killing them. The amount of violence for the sake of violence was exasperating, even though it was obviously meant for comedic effect. Samuel L. Jackson’s performance was awful, as if he was told to play “himself”, or in other words, playing the character of his character. Playing an exaggerated version of his already exaggerated demeanour came off as ridiculous.  It’s all been done before, and often quite a lot better.

There are many films that are so poor in their execution that they become enjoyable to watch, and many that are well aware they are not brilliant cinema and want the audience to know that too. But this one wants you to know it so badly that it is frustrating to sit through. It would be instantly forgettable if it didn’t leave you wondering why it was made, or why anyone in the production process thought any part of the movie was worth a watch.