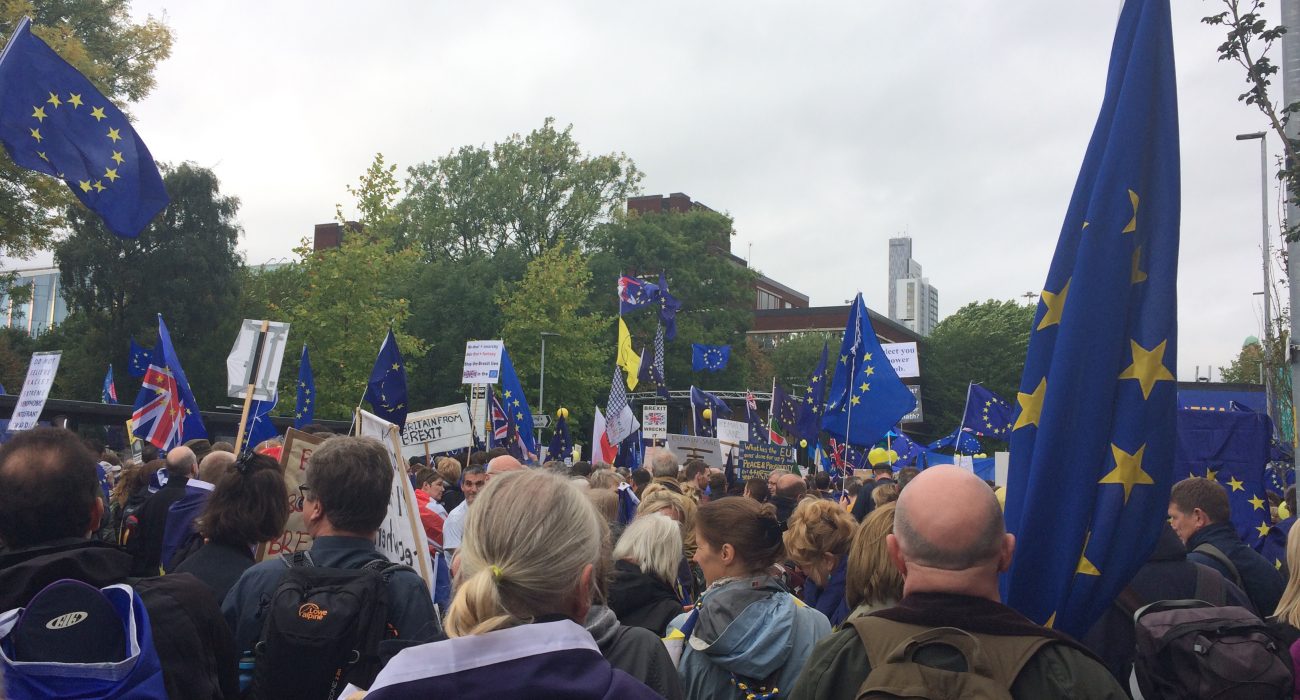 Before the march was about to proceed along Oxford Road (Image: Cameron Broome)

Part of the ‘Autumn of Discontent’ organised by opponents of Brexit, the event began in All Saints Park at around 11:30AM with keynote speeches from high-profile figures including Alastair Campbell, Sir Vince Cable MP, Alison McGovern MP and A.C. Grayling.

At around 1:30pm, the march then departed from All Saints Park, progressed along Oxford Road and Whitworth Street West to the Conservative Party Conference, ending at Princess Street.

Sir Vince Cable MP, leader of the Liberal Democrats, told The Mancunion why he believed the event and Brexit mattered to students and Universities: “For students, it’s about freedom of movement, having a European identity as well as a British identity, it’s about the funding of the universities which depends very heavily on free movement of students and staff so there’s a lot at stake for Universities.”

Vince Cable’s comments about students having a dual identity were echoed by University of Manchester student George Rice who also attended the event.

The 18-year-old Politics and International Relations student told The Mancunion he’d “always had a collective sense of Europeanism”, and suggested he was “British and European” and that the “two don’t contradict each other”.

The Liberal Democrats weren’t the only political party to have a presence at the march.

Labour’s Alison McGovern, MP for Wirral South, was a keynote speaker at the event and spoke to The Mancunion about the message she would give to students that had chosen to attend the People’s Assembly demonstration on the same day, instead of the ‘Stop Brexit’ event.

She said: “If we crash out of the European Union and the Single Market, our country’s public finances will be in dire straits so you can’t really be anti-Austerity and be against our membership of the Single Market. The best way to secure our country’s future so that we can properly invest in our health service and our schools and our young people is to make sure our position as one of Europe’s trading nations is secured.”

Though most attendees were likely to identify as being on the left of the political spectrum, the march attracted people of diverse political persuasions, all united by a common interest in opposing Brexit.

When asked why he had chosen to oppose Brexit when many of his former Conservative colleagues had been reluctant to do so, he told The Mancunion: “When the Conservative Party left the EPP for a hard right group, I thought that was a step too far.”

Felix Milbank, President of Students for EU, told The Mancunion that despite the day’s event, students needed to continue the campaign.

Explaining how, he said: “They can sign up to the newspaper, The Young European, they can sign up to ‘Students for the EU’ which is actively campaigning to maintain educational programs for young people and students in the UK, and they can get involved with other campaigns such as the votes-for-16.”

The ‘Stop Brexit’ march took place on the first day of the Conservative Party conference, coinciding with the usual People’s Assembly demonstration believed to have involved a similar number of protesters.