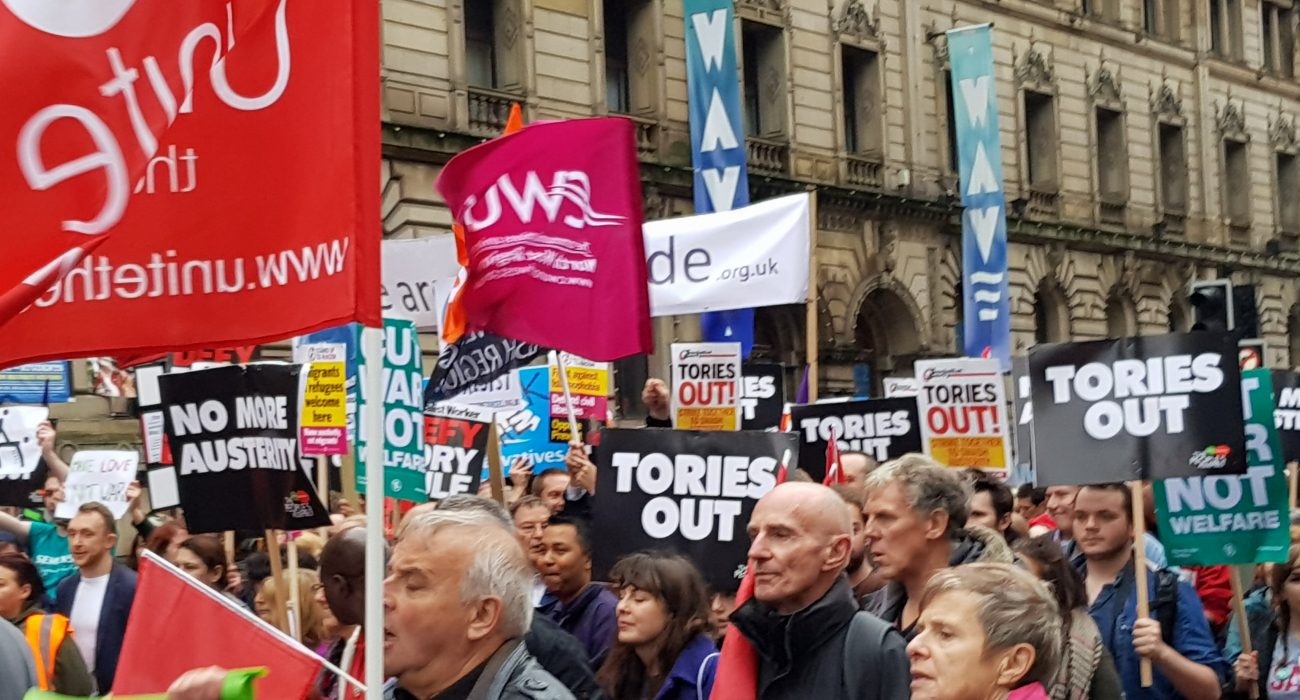 On Sunday the 1st of October, an estimated 30,000 people marched a mile from Castlefield to Piccadilly Gardens to demonstrate against the current Conservative government.

The march took place on the first day of the Conservative Party conference and was the midpoint of five days of protests and events organised by the People’s Assembly.

The marchers were advocating for an end to austerity and the Conservative government.

Halfway through their one-mile journey, protesters were joined by thousands marching as part of the Stop-Brexit march which took part on the same day. The two protests ended in a round of closing speeches from trade union activists and local politicians.

“They’re saddling our children with debt, at the same time they jack up tuition fees” Will Paterson, the Green Party’s 2016 Manchester mayoral candidate, said to the crowd at Castlefield in the opening address of the demonstration.

Mr Paterson’s speech was met with applause as he channelled the concerns of the assembled masses, with chants of “Tories out” providing a constant backdrop to the message espoused by the local Green party member.

Before his speech, Mr Paterson explained to The Mancunion that the demonstration “isn’t just about Tory austerity today, it goes all the way back to the right to buy in the 80’s taking away our right to social housing.”

Marchers appeared to echo this sentiment. Local resident Richard Bolam calmly proclaimed that today’s march was about “30 years of misrule”, going on to say that he was “very angry” at the state of the country. Mr Bolam said The People’s Assembly united him with like-minded people and organisations.

Over 70 busses brought people to Manchester from across the country. Not officially affiliated with any political party, the People’s Assembly gathered supporters from multiple parties, as well as trade unions and student societies.

The Manchester Labour Society was one such society. They could be seen waving banners and holding placards during the one-mile march. Medical student Emma Runswick, who was there protesting the Conservatives’ management of the NHS, stated: “There is absolutely nothing that’s good about this government, absolutely nothing.”  Ms Runswick’s concerns were carried above the heads of the hundreds of protesters who wielded “NHS not Trident” signs.

While the atmosphere of the march was generally one of unity and good intentions, this was not reflected in everyone.

“When I arrived they were shouting at anyone wearing anything like a suit or smart casual clothes who were in the area,” a Conservative-supporting student from the University of Manchester, Ed Bird, stated.

Mr Bird went on to say “I don’t think such protests, and the people attending, are using their time and effort in the most productive manner.” The hostility was kept to chants, however, and the strong police presence was left peacefully watching the protesters march past.

In the closing speeches, Kevin Nelson, Unison’s regional secretary for the North West, declared: “We need to fight back!”

Sunday’s protesters agree with Mr Nelson, but not all of Manchester does.

It is arguably a testament to the city of Manchester, and its citizens, that so many people chose to demonstrate their views in a peaceful and powerful way.