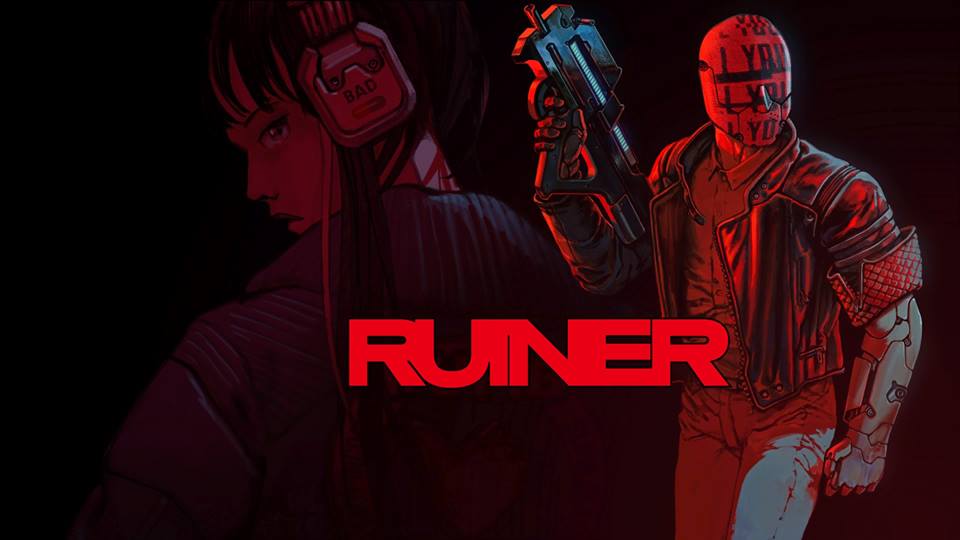 As my character entered another grim hideout full of tooled-up cyberpunk maniacs, the words “DIE” are emblazoned across his LED-facemask. And die I did. A lot.

RUINER is a brutally unforgiving top-down shooter developed by Reikon Games and published by Devolver Digital. You might remember Devolver Digital as the guys who used their stage time at E3 this year to satirise the gaming industry, poking fun at money-hungry developers by showing a gamer throw literal money at his computer screen.

This lovable reputation garnered by Devolver Digital — that they are comprised of honest people who really love games — is very much upheld by RUINER.

From the niche gaming slang used by your hacker guide (simply named ‘Her’) to the immense faith the game has that you’ll stick out its infuriating missions without much help, RUINER plays like a love letter to hardcore gamers of the genre.

The premise of the game is pretty simple – your brother has been kidnapped by an evil corporation, and you must rescue him with the help of Her. If you needed any confirmation that RUINER is all about gameplay over story, look no further than its very first mission which throws you right into the midst of enemies with no introduction other than a simple command: “KILL BOSS”.

RUINER’s roughly 6-7 hour duration will see you follow a pretty similar pattern: travel down a corridor, enter a room, get locked in that room with waves of enemies, fight your way out.

While this did get rather repetitive, the huge arsenal of guns and melee weapons combined with various abilities with their own skill trees means there is plenty of variety between the many chaotic gunfights you’ll encounter.

Visually, the game is striking. RUINER’s bleak dystopian world is drenched in neon red lighting, and everything from the bustling town which serves as the game’s hub to the factories and dens that make up the game’s combat areas look fantastic.

The art designers have done a tremendous job of capturing the classic cyberpunk aesthetic of Blade Runner and Judge Dredd whilst forging their own unique style with bold uses of colour and cartoony character models.

RUINER’s world is one in which technology has beaten nature into submission, and the music choice reflects that. Every track is heavily electronic and often deliberately dissonant to the point of sounding more like noise than music.

The intended effect of keeping players constantly on edge whilst conveying the hopelessness of RUINER’s world is certainly there, but there were times the jarring soundtracks actually detracted from my experience.

RUINER doesn’t just refuse to hold your hand, it snatches away from you and then laughs in your face. They’re pretty clear about their stance on difficulty; the official twitter for the game tweeted: “we received complaints that RUINER is too hard. We know it. It was meant to be.”

I like a difficult game as much as the next guy, but too many times RUINER’s vague feedback mechanics meant I died without really understanding why. This reduced a large portion of my countless deaths to annoyances rather than the learning experiences they were no doubt intended to be.

That’s not to say that RUINER was never a rewarding experience. One of the game’s bosses in particular – Shadow – gave me a really hard time; killing me over and over whilst the game’s incessant teasing made me want to throw my controller at the wall.

“That was embarrassing to watch”, says Her after my character falls dead to the floor for the 20th time, whilst the subsequent loading screen passive-aggressively reminded me that I “can lower the difficulty at any time”.

Without the teasing, I probably would have lowered the difficulty. Instead, I gritted my teeth and redistributed my skill points (something you can do at any time) to try out some new tactics. After some more attempts I managed to kill Shadow, and my 28 deaths netted me a pitiful ‘E’ rating for that level.

This didn’t matter though — I felt like a king. RUINER had forced me out of my comfort zone and given me no choice but to get creative with new abilities and adapt to the challenge.

In short, RUINER offers an enjoyable but somewhat unremarkable twin-stick shooter experience. Its fast-paced, punishing gameplay will be a hit with some, but its biggest strength lies in its immensely cool cyberpunk style.

Be warned, though: this is a game that very much knows its audience — fans of the genre who love a challenge — and will do little to ease outsiders into the experience.