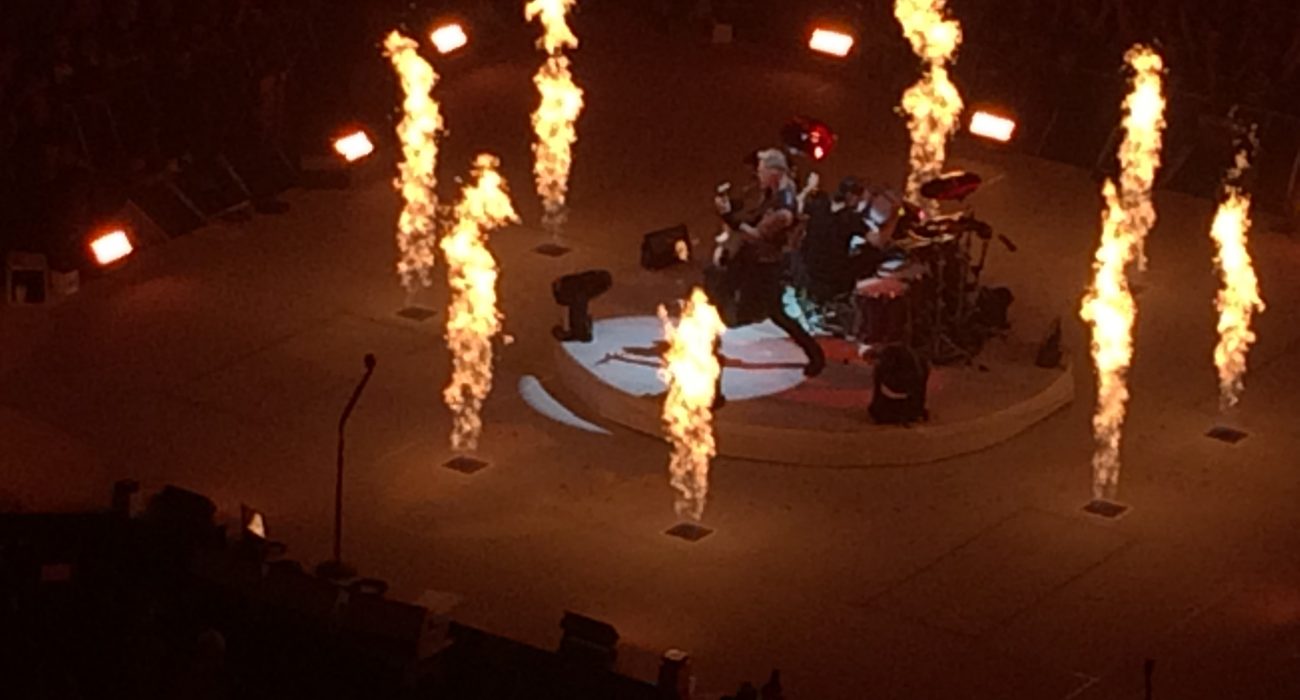 The 28th of October, Manchester Arena

There’s only one place in Manchester that could host Metallica and do it justice for all. And that is the Arena. Because Metallica don’t offer gigs, they offer battlegrounds. Violent performances for thirsty crowds, with only one rule: leave no witness disappointed.

The 36-year-old metal pioneers bring a ten-album career, including fresh cuts from last year’s Hardwired…to Self-Destruct, to the North of England for one of only a handful of UK dates.

A combination of the band’s exclusivity and legacy means the 21,000 capacity venue is packed with the most die-hard of fans. For many it is their first time, for many others, it’s another ‘best night ever’ courtesy of their all-time favourite ever artist.

In traditional Metallica uniform – black t-shirt, white skin, a look of impenetrable adoration – the hoards swarm around a stage centred in the room like some hellish plinth. The band finally take to it as the iconic final shoot-out scene from ‘The Good, the Bad and the Ugly’ fittingly plays, and the Arena is transformed into a war zone.

Opening track ‘Hard Wired’ sets the lethal tone for the rest of the night, with Kirk Hammett unleashing an abattoir of solos and James Hetfield’s drill sergeant bark having lost none of its ferocity with age. The four horsemen-turned-musicians play glaring out across the globe in different directions, backs to each other and balls to the crowd as they follow up with ‘Atlas, Rise!’.

Overhead, there’s chaos. Spotlights incarcerate the band, flashing through the colour spectrum as if some spaceship battle scene from the ‘70s were going on as they blast through their classic 1983 hit ‘Seek and Destroy’.

Back on stage, every member exhibits the virtuosity they have always been lauded for. Regardless of his cringey dad persona, drummer Lars Ulrich shows off enough shell-blast snare action and machine-gun rhythms to send tremors through the toe bones.

On bass, the hairy man-spider Robert Trujillo gives a superb rendition of the instrumental improv track ‘(Anesthesia) Pulling Teeth’ as a tribute to original bassist, the deceased Cliff Burton.

But there are some sloppy moments. On ‘The Day That Never Comes’, the serrated edges are blunted when Ulrich’s bass pedal work and the opposing guitar lines fall over each other, breaking their usually strict ranks.

They go all Blue Man Group at one point, introducing a full-band drumming interlude to ‘Now That We’re Dead’, but some timing errors cause it to become crossfire. Overall the stunt feels a bit contrived, but at least Metallica are trying something new after all these years.

In spite of their legend status, the band has had to deal with accusations since the ‘90s of being sell-outs, caring more about profit than music. With tickets costing well over £100, it’s hard not to sympathise with their detractors.

That said, you really are getting the crème de la crème of concert spectacle. The pyrotechnics are jaw-dropping — fireworks and flamethrowers spouting through the stage floor pass inches from the band members, making Apocalypse Now look like a walk through Platt Fields Park.

During ‘Moth to Flame’, a load of tiny LED drones appear to weave and loop around each other in ballet style — it’s the most remarkable thing this reviewer has ever seen at a gig.

For a group with a history of perpetuating anti-oppression and anti-establishment themes in their music, Metallica — or, as the Mancs say, Meh-tally-cer — indulge the crowd in what can only be described as sheer mind control.

A dozen box-shaped screens surround the stage, gliding up and down like hypnotist watches. Hetfield’s voice is often drowned out as the audience scream the lyrics that have spent decades implanted in their heads and hearts.

There’s a sense that these people would literally do anything for their metalling heroes. Before ‘Now That We’re Dead’, when the singer promises his fans they “can live forever, but first, you must die”, you can see the fear in the security guys’ eyes as they realise they might actually have a mass suicide on their hands.

There’s a healthy balance of new and old songs in the setlist. They sandwich classic ‘For Whom the Bell Tolls’ between the newer ‘ManUNKind’ and ‘Halo On Fire’ and all three rage equally, Hammett firing off guitar lines with sniper accuracy.

The band even take the time to give a cute nod to their current location, performing short covers of ‘Don’t Look Back in Anger’ and ‘Love Will Tear Us Apart’ as on-screen neon bees float above. The crowd, of course, lose their shit.

But it’s when the hits come later that the room truly surrenders themselves to these four yank fifty-somethings. ‘Creeping Death’ opens up the floor for primordial moshing. ‘Sad But True’ sees a thousand fists smack the sticky air.

The inevitable highlight is ‘One’, a song that even the most cynical Metallica-hater will concede is one of the most sublime metal compositions of all time, unable to resist headbanging along to Hetfield’s optimism: “Darkness imprisoning me / All that I see, absolute horror / I cannot live, I cannot die / Trapped in myself, body my holding cell”.

The inexorable ‘Master of Puppets’ brings initial proceedings to a close, before the group return with an encore of ‘Spit Out the Bone’, ‘Nothing Else Matters’, and, finally, ‘Enter Sandman’. Although they end with their least accomplished but most commercial song, it’s hard to imagine where else in the set it could come as the exhausted crowd spend their last gasps of air belting out the chorus.

The band leave an Arena full of Metallica fans with stiff necks, sore throats, and years-in-the-waiting smiles. It’s been a long war, and at last, it is over. And in the end, everybody won.