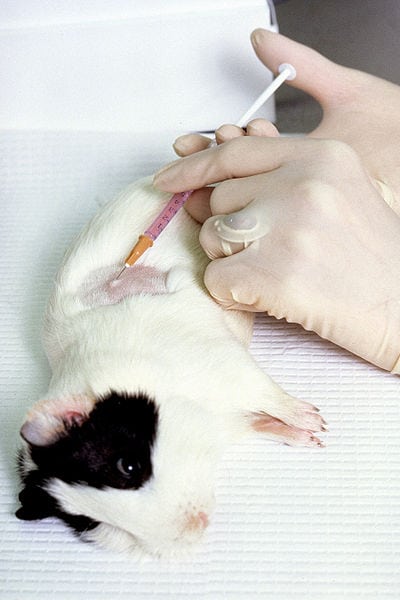 The University of Manchester has been found to kill more animals for scientific research than nearly all other universities in the country.

Manchester’s Faculty of Biology, Medicine and Health has published data on the number of animals they used for research in 2016 in accordance with Concordat on Openness on Animal Research in the UK.

174,120 animals were experimented on throughout the year, averaging to almost 500 animals a day. All animals are killed either during experimentation or after research is completed.

The majority of tested animals were rodents. Other animals, such as sheep, fish, birds, and amphibians, were also experimented on in 2016.

Reports on current experiments have also been published. In one experiment, University researchers are creating severe burns and open wounds in 300 pigs’ backs to test “novel dressings,” to see if they reduce “abnormal pigmentation” in scars more than conventional dressings and treatment. All pigs will be killed after their wounds heal.

Another current study will take the lives of 2700 rats. Pregnant rats will be injected with agents which make them sick, have parasites inserted into their digestive systems, and be subjected to stressful situations, to investigate how brain disorders will develop in them. Afterwards, all rats will be killed.

The University of Manchester are also inducing heart failure in up to 800 sheep.

Last year, anti-vivisection organisation Cruelty Free International submitted a Freedom of Information (FOI) request for information on animal testing at the University of Manchester. The University did not respond, although a spokesperson for the Faculty of Biology, Medicine and Health said they have no record of such a request.

However, the University of Manchester has not published information on animal experimentation approved prior to 2014, although a spokesperson for the Faculty of Biology, Medicine and Health has told The Mancunion that this is available upon direct request to the department or, if the data is from before 2012, it is subject to an FOI request.

Under the online database of 2014-2016 reports, the University website reads: “Find out about our research involving animals in previous years on our data archive page.”

There is only one file on the data archive page: an infographic on animal research in 2016 (the same year the website was launched).

“When we launched our award-winning website in 2016, we were one of the first Universities to produce an infographic of our most up-to-date figures, which we are committed to doing each January when they become available.”

The University website declares that “animal welfare is a priority at The University of Manchester.” It explains: “We employ a full-time named animal care and welfare officer (NACWO).”

What it doesn’t explain is that NACWO is just a secondary title for the Deputy Director of Biological Services. When the position of Deputy Director was advertised in Summer 2017, it listed requirements that the successful applicant be an “effective communicator” and have “a high level of planning and organisational skills.”

At the very end of the job listing, it acknowledged that applicants should also have a “good working knowledge” of the Animals Scientific Procedures Act the University must adhere to.

“You will fully deputise the Director,” the job description read. “You will also be a Named Animal Care and Welfare Officer.”

116 UK organisations are now signatories of the Concordat on Openness. The ten universities which conduct the most animal testing in the UK have all released their animal experimentation figures. The University of Manchester places fourth in the top ten.

In total, 1.4 million animals were killed in 2016 by the top ten universities. They account for a third of all animal research in UK universities.

Wendy Jarrett, Chief Executive of Understanding Animal Research, which developed the Concordat on Openness, said: “The Concordat has fostered a culture of openness at research institutions up and down the country.

“Institutions now provide an unprecedented level of information about how and why they conduct medical, veterinary and scientific research using animals.”