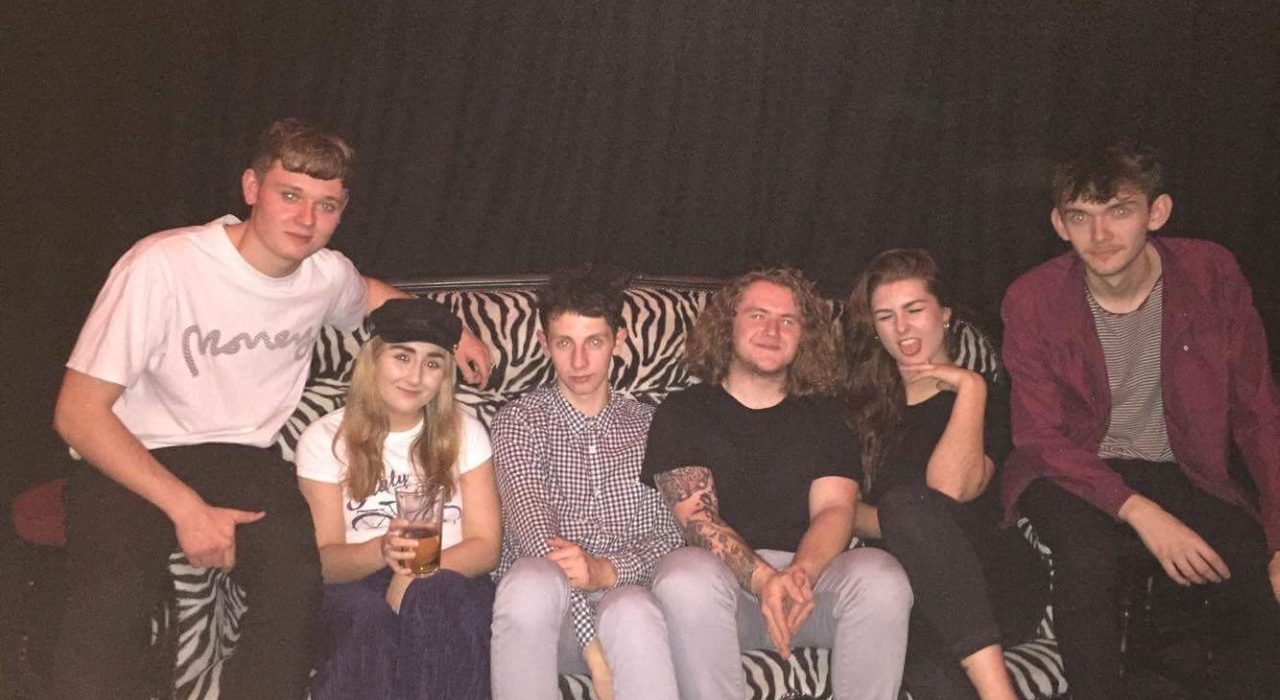 In a cluttered green room at the back of indie bar Jimmy’s NQ, The Rills squeezed into a tiny sofa, spirits sky-high from their electric show which had dazzled with punk swagger, an undertone of politics and an indie camaraderie…

Great show guys — we loved it. Can you tell us a bit about how the band got together?

Mitch: Well me and Charlie went to secondary school together and he was a drummer at the time and we started a band. Callum was stupid enough to be a guitarist and we said come and play bass for us temporarily, and here we are a few weeks down the line. Then we finished that band and sort of started again when we met Mason, ’cause he’s a fucking mint drummer.

Mason: I’m pretty good. Yeah I met Charlie and Callum at uni in Clapham, and I think it was like the second day, I heard they had a bit of an accent and I thought ‘wow, I’ve never spoken to anyone from Lincoln before!’ So I went over, chatted them up for a bit, and it turned out they needed a drummer. We had our first practice and it was a match made in heaven.

Mitch: We’ve had some bad times in the past. We moved to Sheffield before we moved to London, me Charlie and Callum, and stupidly thought it would be really easy, but we worked really horrible jobs. I used to work in the Marks and Spencer fridges at half five in the morning, and Charlie would do the night shift. So we had a few hours in the day where we could get stuff done, but everyone hated each other.

Charlie: Just ended up smoking too many wacky cigarettes.

So if you were working so much how did you find the time to rehearse?

Charlie: We actually found a great space in Sheffield called the Yellow Arch. Arctic Monkeys used to play there. They’d bring beers to your room if you asked nicely. It was alright for practising, we just needed a drummer. We had a few but they were all just jokers.

Mitch: Sheffield actually really changed the way we wrote songs. Before it was a bit of an after-school club, we were finding our feet with gigs and we were a bit rubbish.

Mason: I feel grateful that I avoided these days. I just came in and it’s all been smart.

So you’ve done Manchester, where’s next on the list?

Charlie: We’ve got Liverpool lined up. Possibly one in Sheffield. We’re just going to focus on videos and getting songs done.

Mitch: We’ve got a couple of songs recorded that are ready to go out. We recently found a VHS from about 1932…

Callum: So we’ve started to just record everything we ever do with that. There’s some right rubbish stuff.

Mitch: Last weekend we played the Nambuka for This Feeling.

What do you guys want to be remembered for?

Mason: Being the maddest drummer to come out of this century.

You have a kind of early Arctic Monkeys/Libertines sound, so who would you say are your key influences?

Mitch: Oh this is a really, really tough one.

Mitch: I’d definitely say The Beatles, without a doubt. Libertines is definitely one. We sort of found each other through Arctic Monkeys but we’ve made a conscious effort with our music to try and avoid the cliche things they do. A lot of bands who come about nowadays are doing pretty similar things to what they did at the start.

Callum: Yeah they stick on an accent and play fast on stage.

Mitch: Yeah but we kind of do that.

Mason: We were talking earlier in the pub and Mitch was saying usually in music the drums and bass go hand in hand, but we’ve found in our music the drums tend to follow the guitar lead or the vocals, so you get these weird little blemishes.

Charlie: We just try and approach indie music differently. We had similar influences but we’ve brought Mason in and it’s like a new dimension to it.

Mitch: For the third key influence, it’s not just bands, it’s modern England. The state of Lincoln is like Manchester — there are a lot of homeless people and it’s very dominated by spice. Not that we’re trying really hard to be political, it’s just that things are so obviously there, right in front of you.

So what’s on the cards for next year? What’s the first single?

Charlie: Depends whether it comes out in December or  not. We’ve got two lined up and we’re off to record next month.

Mitch: But the title is ‘Us and Them’, if that’s what you were fishing for. That’s probably the one we’ll bring out.

Mason: It’ll make you smile in a time of need.

If you could describe your sound visually how would it look?

Mason: With a tear slowly rolling down. Like the album art of London Calling by The Clash.

Mitch: That’s actually an ironic joke of an Elvis album, so probably Elvis — that’s what it looks like.

Mason: Sexy and sort of fat towards the end.

Finally, what’s with the ‘De Niro’ tattoo on your arm Mitch?

Charlie: Mine’s Elmo, ’cause everyone called me Elmo when I was younger.

Callum: I’ve got one on both arms. ‘Ringo Starr’. I lost a bet on the football when Lincoln had Burnley in the FA Cup.

Mason: Now they’ve just got to think of one for me.

We can’t wait to see. Thanks for your time lads, and great show tonight.

Look out for future gigs and upcoming singles from The Rills.