Star Wars: Battlefront II released last week amongst a level of scrutiny, controversy, and criticism unseen in the games industry since as long as I can remember. In an almost Star Wars-esque battle that raged across the internet, the consumer rebellion emerged victorious against the EAmpire — for now, at least.

Unfortunately, the game itself is far less interesting than the debate around it. Whilst Battlefront II provides a significant amount more content than its predecessor, it stands as living proof to me that quantity does not equate to quality.

The campaign was arguably the biggest single addition to Battlefront II, and featured an intriguing premise, putting you in the shoes of an elite group of stormtroopers called the Inferno Squad.

The narrative of the campaign is actually a fairly good one, and had Battlefront II blended the good vs. evil battle into the gameplay, it would have been an effective and emotive — albeit short — tale of redemption and corruption that dealt with the issue of humanising that which lies beneath the otherwise anonymous mask of the stormtrooper.

However, the narrative elements of the campaign sit alongside the first-person shooter elements in a way so much lacking in subtlety that the game becomes contradictory.

At one juncture in the story, for example, Iden and Meeko, two of the game’s main protagonists, become disillusioned with the empire after it refuses to protect the citizens of one its planets, instead choosing to save only high ranking officials.

The righteous indignation of the pair, though, is almost made a mockery of by the gameplay that follows. In escaping the clutches of the evil empire, you, the player, are made to shoot your way out by means of killing literally hundreds of stormtroopers whilst using an AT-AT to plough your way through the streets of the city.

Stormtroopers are pigs to the slaughter. photo:EA

Elsewhere, Luke Skywalker’s introductory mission sees him kill his way through an army of stormtroopers, as well as insects who are angry at the colonisation of their planet.

The light side of the force, in Battlefront II, clock up a kill count alarmingly higher than the darkside, obscuring the good vs. evil theme to the extent that the immersiveness of the story was severely compromised. Yoda once said, “a Jedi uses the Force for knowledge and defence… never for attack.” Battlefront II sees you do the complete opposite. 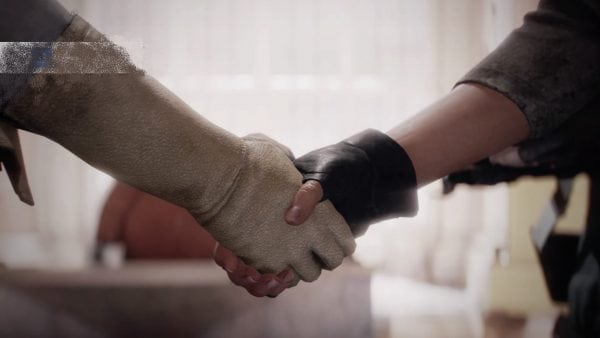 The dark side and the light side have an alarming amount in common. photo:EA

The missions were also quite repetitive and ‘gamey’ for lack of a better word. We’ve all completed that mission before where you have to defend an objective from an onslaught of attackers, and this was a recurrent trope in the campaign. The way gameplay was structured in the missions felt formulaic and contrived, and this added to the overall disappointingly bland feel of it.

The game’s other major mode, multiplayer, might generally be seen as the main appeal of the game and provides a wide variety of different game modes which a far larger range of maps than the first game.

The maps, however, are far from perfect. They can generally be divided into two subgroups: planets and star-bases. The planet-based maps are by far the strongest of the two, presenting sprawling, varied and well-structured maps that present plenty of environmental advantages and ways to approach the objective.

The other subgroup, star-base maps, are much, much weaker. The luminescent white and polished marble look that constituted the inside of the death star is striking at first but becomes extremely problematic for map design.

For one thing, it makes the maps frustratingly disorientating, but, more crucially, makes one map artistically indistinguishable from the next. This made playing through different maps feel remarkably monotonous, almost negating the enhanced scope that EA were so proud of announcing in their demo.

A more severe problem, however, arose due to the corridor based structure of star-base maps. On the one hand, Battlefront II’s maps were sprawling, but the combat became squeezed into impractically tight choke-points which resulted in the objective being largely ignored for trench warfare.

The main criticism that EA faced for their online mode was the presence of star cards, which were rightly protested as they were a pay-to-win mechanic in a lootbox available primarily through microtransactions.

However, the star cards were surprisingly unobtrusive. Despite building the whole game around them, EA’s integration of them is simultaneously clandestine and obnoxious. They can hardly be avoided; the first thing that greets you when you open the game, and the thing you see every time you die. At the same time, they are tucked away in submenus, residing in apologetic recesses where their presence is felt rather than seen.

Granted, this may have been a last-minute manoeuvre from EA, but in doing this they lay bare just how basic the progression system is underneath the star cards. Getting better guns is based purely on the number of kills you get. Levelling up seems to have no consequence outside of star cards. Everything is built around them, and, with their presence limited in the game, it’s clear how empty the rest of the online mode is.

I’ll always remember Battlefront II as the game that went too far and finally brought loot boxes and microtransactions into mainstream debate. The game of which the aftermath resulted in Belgium and Hawaii’s governments starting to look into the gambling mechanics of loot boxes and how they can potentially exploit children.

I’ll always remember that, but the game itself is a thoroughly forgettable experience whose lasting legacy will be the battles fought outside it rather than within it — and rightly so.